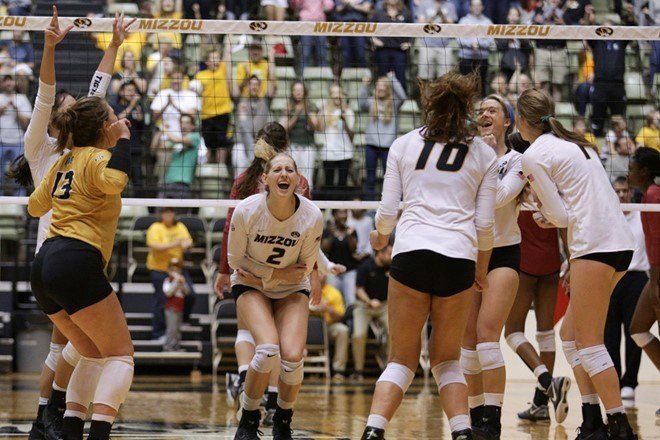 With the win, Mizzou needs to defeat Tennessee in the home finale in order to clinch the SEC Championship. This would be their second title in the past four seasons.

Melanie Crow took charge, putting down 11 kills. Alyssa Munlyn posted nine kills and an impressive .818 hitting percentage, this is the second time this season that Munlyn has hit .800 or higher.

ATHENS, Ga. – No. 22 Mizzou Volleyball (24-5, 15-2 SEC) took care of business in its 2016 regular season road finale, sweeping Georgia (25-20, 25-17, 25-19) in straight sets. The Tigers return home on Saturday, Nov. 26, with their regular season finale against Tennessee. A win against the Volunteers will clinch Mizzou’s second SEC Championship in the past four seasons.

Junior Courtney Eckenrode (The Woodlands, Texas) was deadly on offense and setting the ball, posting four kills on .600 hitting and 35 assists, respectively. Her efficient play at setter led Mizzou to 45 total kills on .424 hitting. It marked the Tigers’ fourth match of hitting .400 or higher this year.

The Tigers and Bulldogs exchanged points throughout much of the opening set, as both teams were faring well offensively. Mizzou held a slim late 19-18 advantage, before ending the set on a 6-2 scoring run. The Tigers ran a smooth offense to kick off the evening, posting 15 kills on .448 hitting in first set action.

The second set belonged to senior Carly Kan (Honolulu), who made a series of outstanding defensive plays and four kills on .500 hitting. Following a sensational first set by Mizzou’s offense, it one-upped itself in the second set with 20 additional kills on .516 hitting.

Redshirt junior Melanie Crow (Wildwood, Mo.) was one of four Tigers to hit .400 or higher in the second set. Overall, Crow posted a team-high six kills on .400 hitting in the set.

Mizzou closed the match with another strong effort in the third set. The Tigers’ 3-0 victory over the Bulldogs marked their 13th sweep this season and their 10th sweep in SEC play.

The Tigers close their regular season on Saturday, Nov. 26, against Tennessee. Saturday evening will mark “Senior Night” at the Hearnes Center, as the program honors Emily Thater, Julia Towler, Carly Kan and Alexa Ethridge. First serve is scheduled for 6:30 p.m. (CT) and the match will broadcast live on SEC Network + via WatchESPN.

Georgia was led offensively by Maddie Lobenstein’s 12 kills, and Cassidy Anderson anchored the defensive effort with 11 digs as Georgia stayed tough but dropped the sets by scores of 20-25, 17-25, and 19-25, respectively.

The Bulldogs battled early in the first set, playing to a 13-13 tie but were unable to tame the Tiger offense. Committing just two unforced errors, Mizzou pulled away from the Bulldogs in a cleanly-played set, claiming the opening frame 25-20.

The Tigers used a six-point run to seize some cushion in the second. Mizzou hit .516 in the frame and took the second set 25-17.

Georgia was able to adjust after the break, limiting the Mizzou attack to a .280 clip. The Bulldogs trimmed the Mizzou lead to 20-18 looking to extend the match to a fourth set, but the Tigers closed on a 5-1 run earning a third set victory 25-19.

The Bulldogs will go on the road for their season finale where they will take on the Mississippi State Bulldogs at the Newell Grissom Building, Saturday at 1 p.m. ET.