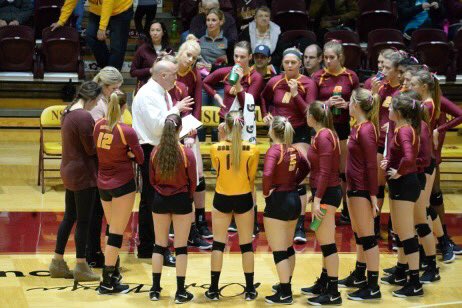 Northern State women’s volleyball is at the top of the heap in this week’s AVCA Division II Poll release. The Wolves, who collected 39 first place votes and 1,166 total points, went 3-0 last week with strong wins over MSU Moorhead (3-0), Wayne State (3-0) and Augustana (3-1).

Nebraska-Kearney received 4 first place votes and 1,116 total points to improve from third to second in the poll. The Lopers are on an 11-match win streak following a pair of straight set wins over Missouri Southern State and Southwest Baptist.

Concordia-St. Paul is in third after earning 1,042 total points, followed by Western Washington in fourth. The Vikings have won 17-straight matches, collecting its fourth and fifth consecutive sweeps against Central Washington and Northwestern Nazarene.

After being ranked first by the AVCA last week, Cal State San Bernardino fell to fifth nationally. The Coyotes saw their 14-match win streak come to an end to then-ranked 24th Cal Poly Pomona in 4 sets last Friday. The win was a big one for the Broncos, who jumped up to 19th in this week’s Top 25 release.

Barry joined the poll this week, taking the place of Colorado School of Mines with 107 total points. The Buccaneers extended their win streak to 6 matches in a row, downing Nova Southeastern (3-0), Florida Southern (3-1) and Saint Leo (3-2).

5 teams mentioned on only one ballot for a total of 40 combined points.

Dropped Out: Colorado School of Mines 21