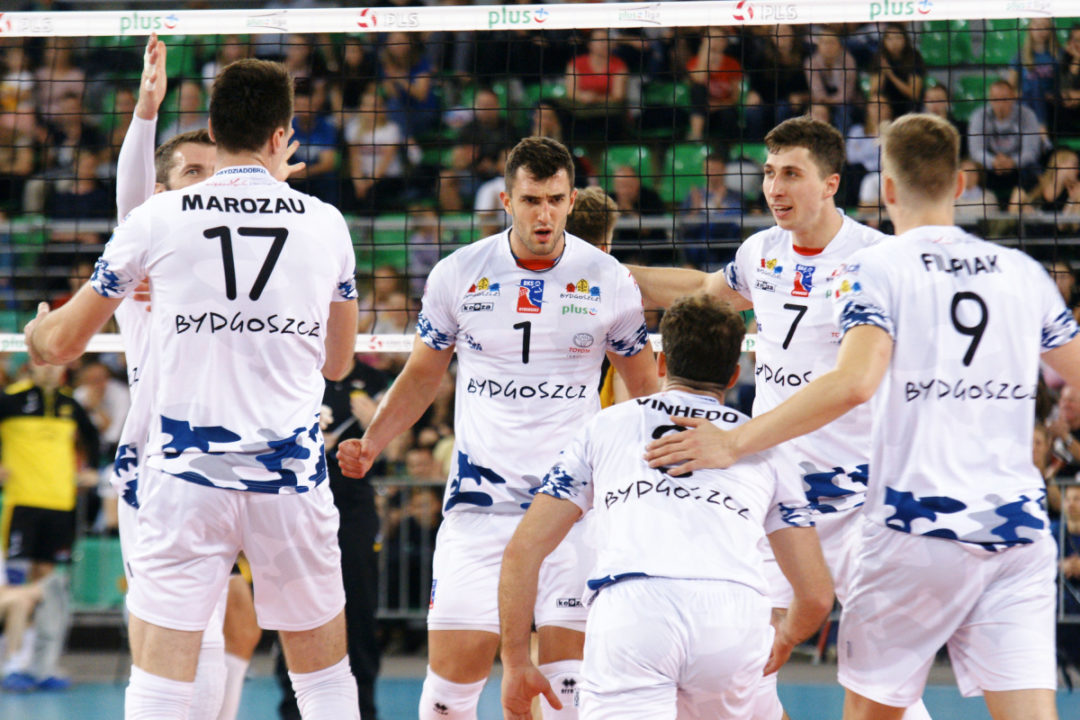 An exciting match was in store in Szczecin as they prepared to open their season against Lotos Trefl Gdańsk. The 1st set started off tight, but at 5-5 the lights went out on the match. The lights literally went out in the arena, and the match could not continue. The match will take place at a later date with the score starting a 0-0. Over 5,000 fans were in attendance to see the debut of Szczecin’s star-studded roster, including World Championship MVP, Bartosz Kurek.

Nikola Kovacevic led the way with 18 points for Bydgoszcz in their 5-set upset over the defending champions. Kovacevic scored on 17 points and 1 service ace. They got 16 points from their outside hitter, Bartlomiej Lipinski. His points came from 14 blocks and 2 aces. Bartosz Filipiak  scored 13 points form the right side on 11 kills, 1 block, and 1 ace. Pawel Gryc started the last set in place of Filipiak after being used as a sub in the 1st and 4th sets. Gryc scored 11 points on 10 kills and 1 block. Maksin Morozau scored an impressive 15 points in the middle from 9 kills and a match-high 6 blocks. Michal Szalach contributed 8 points from the other middle blocker position.

Mariusz Wlazly led Skra with 21 points from the right side. His points came from 16 kills, 4 blocks, and 1 ace. Milad Ebadipour scored 14 points on 10 kills, 3 blocks, and 1 ace. They used Artur Szalpuk and Piotr Orczyk as the other outside hitters opposite of Ebadipour. Szalpuk scored 9 points on 9 kills in the first 4 sets. Orczyk scored 8 points on 8 kills (in 10 attempts) after starting in the tiebreak. Karol Klos and Jakub Kochanowski chipped in 13 and 12 points in the middle for Skra respectively.

Karol Butryn came up big for Katowice as they earned their first win of the season and 3 points. The opposite scored 22 points on 18 kills, 2 blocks, and 2 aces. Tomas Rousseaux and Dominik Depowski scored 14 and 13 points respectively from the outside hitter position. Rousseaux had 11 kills, 2 blocks and 1 ace. Depowski contributed 10 kills, 2 blocks and an ace. Maciej Fijalek set Katowice to a .340 hitting percentage (51%). He got 11 points from Bartlomiej Krulicki and 10 from Emanuel Kohut in the middle.

Jan Hadrava led Olsztyn with 15 points in the loss. The opposite registered 13 kills, 1 block, and a single service ace. The only other double-digit scorer for Olsztyn was Marcel Lux. The outside hitter put away 12 kills and added an ace. Pawel Woicki set his team to a .268 hitting percentage (44%).