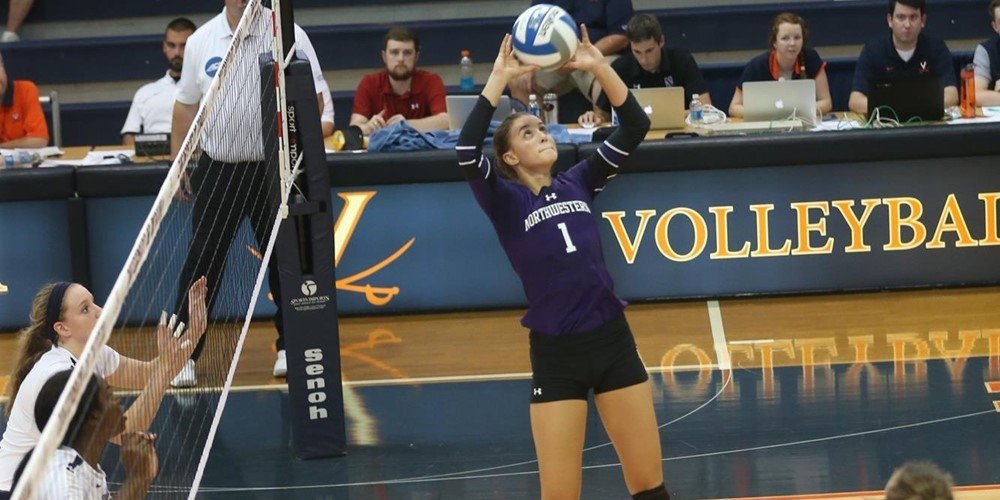 Northwestern (5-2) had to fight back from eight-points down in both the first and second sets – 19-11 in the first and 13-5 in the second – to get the win Friday morning in Nashville. Current Photo via Northwestern University

The Lipscomb Invitational began with a dramatic three-set sweep over Virginia Tech behind the powerful swing of Symone Abbott and two furious rallies.

Northwestern (5-2) had to fight back from eight-points down in both the first and second sets – 19-11 in the first and 13-5 in the second – to get the win Friday morning in Nashville. Both sets ended up 26-24 in favor of the Wildcats. NU then ran away with the third frame, building a 14-6 lead before finishing it off, 25-16.

“We dug ourselves a big hole in the first two sets but showed great confidence and composure in battling back to win,” head coach Shane Davis said. “That set the tone for set three, where we took control.”

Abbott solidified her place at the top of the Big Ten kills list with 20, improving her kills per set rate to 5.0, nearly a full kill better than the next closest on the list. Abbott added six digs, two aces and two blocks.

Junior setter Taylor Tashima put up her third double-double of the season with 30 assists and 16 digs. She also served a career-high four aces and notched four kills. Katie Kniep chipped in 13 digs and a career-high eight assists.

Defense loomed large for Chicago’s Big Ten Team as the ‘Cats racked up 11 blocks, four of which came from Kayla Morin. Northwestern held Virginia Tech to .132 hitting, more than 100 points lower than the Hokies’ season average.

Northwestern outscored Virginia Tech 15-5 down the stretch of the first set after trailing 19-11. Mixed in was a 10-1 run that gave the Wildcats the lead for good. The ‘Cats then were down 13-5 and 19-13 at points in the second set before rallying again. The third and final frame required no such comeback, as Northwestern got up big and coasted to the win.

Next up is a match at Lipscomb later tonight at 7:30 p.m. It will be streamed live online via Watch ESPN.