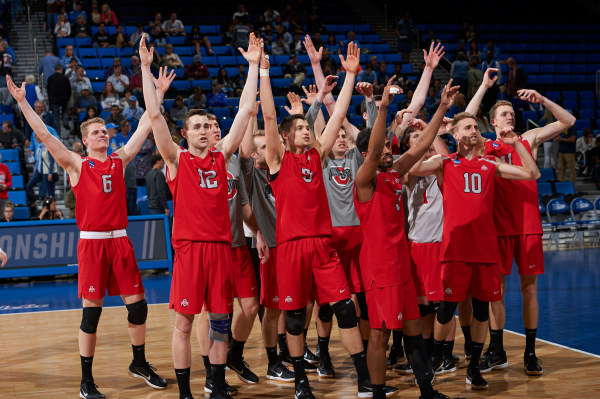 Despite winning back-to-back National Championships, the pressure isn't on Ohio State in 2018 as they prepare for LBSU. Archive Photo via Ohio State Athletics/Volleyball

It may not seem like a team who has won two consecutive National Championships or is one of the largest schools in the country could play the underdog card. That’s exactly what the Buckeyes are doing though as they prepare for their NCAA Semifinals match with #1-seeded Long Beach State – a team who is 26-1 and has won 24 of their matches in four sets or less.

“I can’t speak on behalf for the other guys but for me personally, I enjoy being the underdog more than I do
being the No. 1 seed as weird as that sounds,” Ohio State’s junior middle blocker Blake Leeson said. “In 2016 we had no expectations and I think that allowed us to play more free. We are in that spot now so I like where we are at.”

For athletes that participate at the highest level of sport, finding any edge is important. Although it may seem silly to sit here and say that the back-to-back National Champions are approaching this as an underdog, the fact of the matter is that they aren’t favored to win this match. You get the opportunity to mesh an ultra-talented team with an extra bite and a free-mind and you have to take it.

“In 2016 there were no expectations. You just kind of go out there and give it what you got,” Leeson added. “In 2017, we were expected to win. I think everyone was more tight. For me, it was more of a relief when we won more than an
excited feeling. Don’t get me wrong, I was excited. But it was more of ‘okay, we did what we were supposed to
do’ versus in 2016 it was like ‘Oh my God, we did it.'”

Instead, the pressure lies on Long Beach State, who’s been the top team in the country from start to now. That pressure was loosened when they lost to Hawaii, getting rid of the hype over a potential undefeated season, but it still exists. Last season, the pressure of being one of the favorites may have gotten to the 49ers as they lost to BYU in the semifinals (this very round) as the higher seed. Maybe that prepares them better for this season and they won’t feel that pressure though.

Regardless of what Long Beach State feels, the lack of unreasonable expectations and tension applied to Ohio State should allow an experienced and talented team to play loose and free. That’s never a good combination for any opponent to face, like the 49ers will have to.