Pac-12 Players of the Week 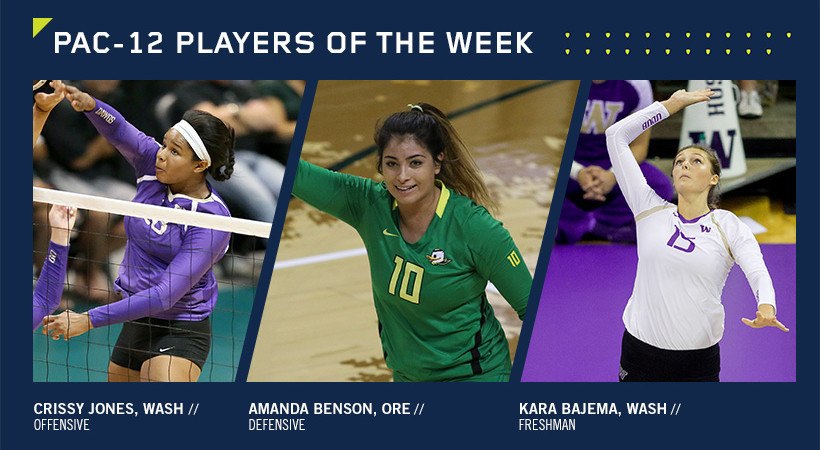 Here are your week three Pac 12 players of the week! Current Photo via Pac 12 Athletics

Offensive: Crissy Jones, Jr., Washington
• 4.09 kpg, .380 hitting pct., 1.09 bpg, 4.91 ppg
• Jones was named Most Outstanding Player of the Outrigger Resorts Invitational hosted at Hawai’i, leading the sixth-ranked Huskies to a 3-0 weekend, including a career-high 22 kills in a win over the 14th-ranked Wahine in the tourney finale.
• First-career weekly honor and 58th all-time for Washington.

Freshman: Kara Bajema, , Washington
• 1.73kpg, .195 hitting pct., 1.73 bpg, 2.86 ppg
• Bajema led the Husky block during a 3-0 weekend in Honolulu. She had at least six blocks in all three matches, averaging 1.73 per set for the weekend, also adding 1.73 kills per set as well. Had nine kills against the Rainbow Wahine and also served the first two aces of her career in the sweep of Northern Illinois on Saturday.
• First freshman weekly honor of the season for Bajema and sixth all-time for the Huskies.