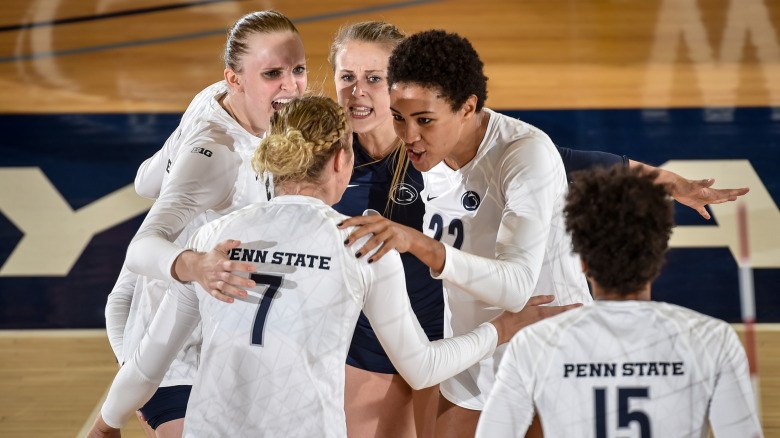 Penn State completed its third-straight 3-0 sweep of the weekend to finish its home invite perfect in sets and matches. Current Photo via Penn State Athletics/Mark Selders

Penn State completed its third-straight 3-0 sweep of the weekend to finish its home invite perfect in sets and matches.

Simone Lee led with 10 kills for Penn State, and Kendall White had 15 digs.

Meanwhile Abby Detering launched 33 assists to put her at an outstanding 91 for the weekend. Haleigh Washington had 8 kills Saturday to climb to 27 total for the tournament.

Clemson’s Keely Hayes had 21 assists and Sydney Moseley and Leah Perri each had 12 digs for the Tigers.

Earlier in the day, Clemson dropped Rhode Island 3-0 behind 13 kills and a .360 hitting percentage from Kailey Harvell.

The trio of Abby Detering, Haleigh Washington and Heide Thelen earned all-tournament team honors after exceptional performances over the weekend. Detering guided the team to a .354 hitting clip in three matches, dishing out 91 assists while adding 14 digs, seven kills, six blocks and three service aces. Washington led the team in both kills (27) and hitting percentage (.610) over the weekend while also posting a team-best 15 blocks. Thelen’s transition to right side proved a wise decision, as she came second on the team in kills with 21 while hitting at a .447 clip. She added four blocks, a pair of digs and an assist.

The Blue and White now enter the Big Ten Conference portion of its schedule. The Nittany Lions will kick off league play with a pair of road trips, first taking to Piscataway, New Jersey for a bout with Rutgers on Wednesday at 7 p.m. ET before flying to Evanston, Illinois to face Northwestern on Sunday, September 25 at 1 p.m. ET.

Penn State saw the majority of its offense come from Ali Frantti, Simone Lee and Washington in the first set, with each of the players notching three kills in the opening frame. After a 7-7 tie, the offense erupted for a 4-0 spurt with both Lee and Frantti making their presence known in the burst for an 11-7 lead. A few points later PSU took off for another 4-0 run, with a kill from Tori Gorrell and an ace courtesy of Detering making the score 17-10 when Clemson called its lone timeout of the set. It wouldn’t slow the Nittany Lions who expanded the run to 8-0, grabbing a 21-10 lead. Clemson fended off two set points before Penn State took the first, 25-14.

Lee and Thelen posted four kill apiece while Washington added three kills and three blocks in the second frame. PSU did not trail throughout the second set after opening on a 4-2 run. Clemson came within one multiple times before a 4-0 run capped by Thelen’s second kill of the scoring session made it 17-12. Clemson came within three at 18-15 before three consecutive kills from Washington launched a 7-2 outburst to win the second, 25-17.

The team held Clemson to -.075 in the final frame of action in a dominant 25-12 victory. The Nittany Lions opened on a 4-0 run and never looked back. Clemson came within one after a 3-0 spurt of their own before a pair of kills from Lee grew the score to 8-4. After kills from Thelen and Washington the crowd erupted in its loudest response of the night as freshman defensive specialist Kendall White struck a back row kill to force a Clemson timeout with a 12-5 edge. From there the lead only grew. PSU closed out the match on an 8-2 run, clinching the win and the perfect weekend.

Notes: Team
– No. 20 Penn State swept Clemson in three sets (25-14,25-17,25-12) Saturday evening to close out the Penn State invitational with 3-0 mark.
– Tonight’s win extends the Nittany Lions to a 6-0 winning streak and their seventh straight-set victory of the season.
– Junior Simone Lee led the offense in the match posting 10 kills while junior Haleigh Washington and junior Heidi Thelenrecorded eight kills apiece.
– Penn State out-blocked Clemson 10.0 – 1.0 thanks to multi-block performances by six different Nittany Lions. Junior Haleigh Washington tallied a match-high six blocks including one solo stuff. Junior Simone Lee and junior Abby Detering tied to finish second with three blocks each.
– The Nittany Lions out-dug the Tigers 42-35, led by a match-high 15 digs from freshman Kendall White. This is her ninth match of the season leading the team in digs.

Series
– Penn State moves to 8-0 in the all-time series against Clemson and 2-0 in matches played at home in Rec Hall.
– The Nittany Lions currently have a 3-0 winning streak against the Tigers.

“Leah stepping into a six-rotation role as a middle helped to stabilize us after a difficult match on Friday night,” said head coach Hugh Hernesman. “We knew that we needed to make some changes and we needed to be creative given our injury situation and the team responded real well to something we really haven’t worked on in practice.”

“I thought we won the serve and serve receive game today in the first match. We came out with a level of confidence and aggressiveness that we didn’t have last night. I was very impressed with how we responded and us achieving the level of play we need to be at in order to be competitive.”

The story of the match however was Clemson’s serving as it had the Rams out of system throughout the match and the Tigers aced Rhode Island nine times. Sydney Moseley, Keely Hayes, Carter and Perri all finished with two to their credit.

In her first start at libero this season, Moseley registered 12 digs with Hayes and Perri not far behind. Hayes finished with nine digs to complement her 26 assists while Perri finished with eight on the night.

The Tigers’ attack was balanced against the Nittany Lions as well with Perri, McGinley and Harvell each totaling five kills. Carter wasn’t far behind with four. Moseley matched her earlier performance with 12 digs in the match and Perri finished with 12 as well. Clemson’s serve continued to be a strength as Perri, Harvell, Carter and Hayes each registered an ace in the loss.

The conclusion of the Penn State Tournament marks the end of non-conference play for the Tigers. Clemson is back on the road next week to face off with Virginia Tech on Friday, September 23 at 7:00 p.m., and then finish the weekend at Pittsburgh on Sunday, September 25 at 1:00 p.m.