Why Penn State Can Win the National Title in 2017 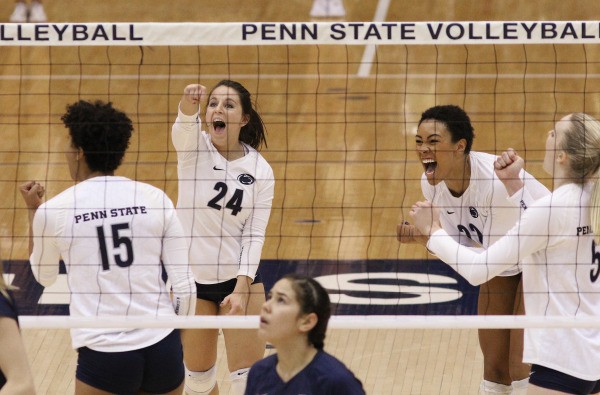 Penn State looks reloaded for another National Title run after two years of falling before the Regional Finals. Archive Photo via Craig Houtz

Including today, there are four Mondays left before the start of the NCAA Women’s Division I Volleyball season. To countdown the season, VolleyMob has begun a new series as we inch closer to late August. Each of the final eight weeks, we countdown the top eight teams in our latest preseason top 25 poll and explain why their fans should have high hopes for their national title chances. So, with four weeks left we look to the team ranked fourth in our poll: the Penn State Nittany Lions.

It’s been a couple of years since Penn State made a final four or a Regional final – a tall task for many programs, but one that the Nittany Lions have mastered over the years with Russ Rose at the helm. In 2016, they had an up-and-down regular season that featured nine losses, but they still earned the 16th national ranking from the tournament committee and made it through to the Sweet 16. They appeared to be peaking at season’s end, and held a 2-0 set lead and match point over top-seed Nebraska, but couldn’t finish the job and eventually lost in five sets. Still, they ended the year ranked 10th in the last AVCA Coaches Poll, and with their play to end the year supplementing the fact that they return so much, they will have what is needed for a National Title run in 2017.

Things all start in the front line with the returns of 2016 AVCA First-Team All-Americans Simone Lee and Haleigh Washington. The tandem combined for 794 kills, 266 digs, 203 blocks and 41 aces last season. With another year under their belts, they should only get better as they provide Penn State with as good of a top two as any in the country.

The wildcard is Ali Frantti. If Penn State gets the player who totaled 21 kills, 15 digs and six solo blocks in the Sweet 16, then they will be difficult to beat on any given night. And if her strong play toward season’s end is any indication, that will give Penn State a legit shot at a national championship in 2017.

Including Frantti, Lee and Washington, Penn State will feature six seniors in 2017 (and it would be nine academically if you add on a trio of fourth-year juniors). Of the 18 players on the roster, 11 are upperclasswomen.

Not only do they have a myriad of experience (and proven experience at that), but they also blend in some key youngsters to the mix that add to the team’s dynamic. Middle blocker Tori Gorrell and libero Kendall White earned spots on the Big Ten All-Freshman Team in 2016, and should be even better as sophomores to raise Penn State’s game to a National Championship contender.

They also add three newcomers – two freshmen and a transfer. Both of the incoming freshmen, Michaela Putnicki and Cami May, were listed as top 100 recruits by PrepVolleyball. Kathryn Cather joins the team as a transfer from Ole Miss and should play right away. With all the returnees and depth that Penn State owns, the three new faces won’t be asked to carry the team, but they all should be viable options if called upon to contribute.

All the pieces are there for Penn State in 2017 if they can serve stronger, play solid defense and get consistent play from the likes of Frantti, any newcomers or surprises on the roster and setter Abby Detering. The mix of an older team with depth and star players is exactly why Penn State can win the National Championship in December.

As always, the schedule will be difficult for Penn State. Beyond the brutal path that the Big Ten slate provides, the Nittany Lions will get meetings with Colorado, Texas A&M and West Virginia. But the big non-conference matches will be against Stanford, who Penn State will play twice in a nine-day span as a barometer for their talent against the defending National Champions. Besides serving as a measuring stick, it’s a solid opportunity for a resume builder to get a top-four seed (to host the Regionals) come tournament time.

They won’t be the top favorite to win the title, but they have the talent, depth and experience to compete with anyone in the country. And if some of the newcomers blend in with the dynamic duo of Lee and Washington, Penn State would have a great chance to do what they last did in 2014 – win the National Championship.