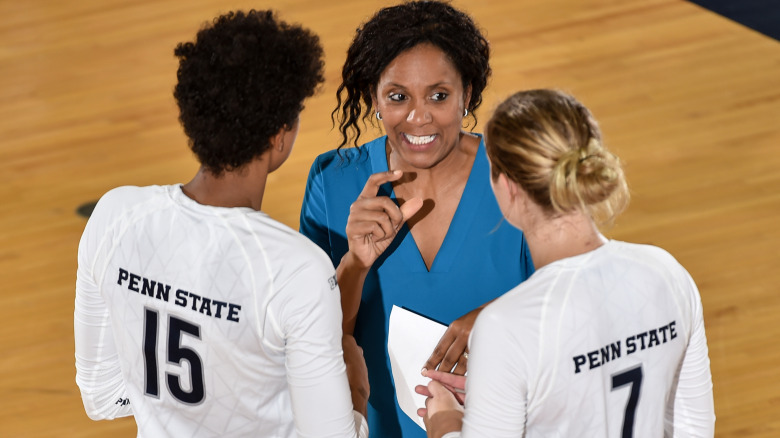 Penn State’s associate head coach, Salima Rockwell has announced her plans to leave the program and collegiate coaching in February 2018.

Rockwell was a member of the Nittany Lions from 1991-94 where she was a three-time All-American under Russ Rose, while also picking up Big Ten honors, including three Big Ten first team selections and the Big Ten Player of the Year in 1993. Following her collegiate career, Rockwell played with the U.S. Women’s National Team from 1995-99, while being an alternate for the 1996 Olympic squad.

After being a player on the court, Rockwell was hired as the assistant coach at Pitt, where she became one of the best recruiting coaches in the nation, signing four of the team’s five top-ranked recruits in 2002. After a year with Oregon State, Rockwell returned to Penn State as the director of volleyball operations. From 2007-08, Rockwell served as the assistant coach that guided the Nittany Lions to back-to-back national championships.

This season, Rockwell helped Penn State to a 33-2 record and their 17th Big Ten title while advancing to the NCAA Tournament semifinals for the 13th time. The Nittany Lions finished the season #3 in the AVCA Rankings and #2 in the VolleyMob Rankings.

“With very mixed emotions, I would like to take this opportunity to announce that effective February 2018, I will be leaving Penn State University to pursue other interests.  After much consideration, my husband (Jeff) and I have decided this is the best move for our family and for my health as well.

“I would like to say a heartfelt thank you to everyone at Penn State University and the State College community for all of your unconditional support over the years. Penn State has always been home to me and always will. I am eternally grateful to Russ Rose for all of his mentorship, friendship and most importantly love; there truly is none better. I would also like to thank Sandy Barbour and Charmelle Green. I feel so fortunate that I got to experience their leadership and witness their remarkable vision of the future of Penn State Athletics first hand.

“There is no way I can put into words how much I love and appreciate all of the student-athletes that have come through the program and how much I will miss those that remain; they are THE reason I coach. Finally, I feel so lucky that my last season was spent with two of my favorite people in the world in Craig (Dyer) and Dennis (Hohenshelt).

“Thank you all again for everything and I will be back to visit often. WE ARE!!”