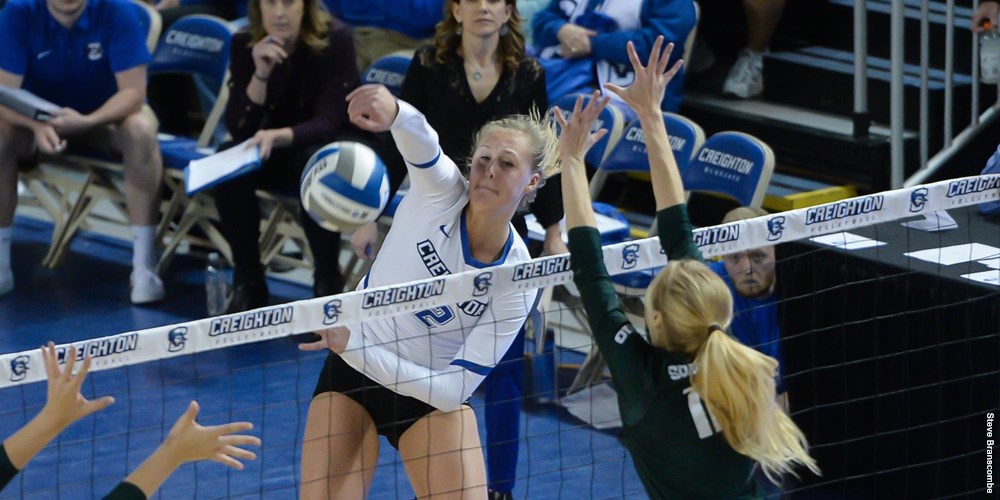 Taryn Kloth helped provide a punch from the outsides of #13 Creighton in leading to a sweep of #17 Marquette. Archive Photo via Creighton Athletics/Volleyball

Coming into the year, Marquette was voted the preseason favorites to claim the Big East volleyball title despite Creighton winning the league every year that they’ve been a member. The Bluejays did good to defend their crown though in the opening week of conference action, sweeping the Golden Eagles in Omaha.

The Creighton offense was in total control with their pins Jaali Winters (15 kills, .300, 11 digs) and Taryn Kloth (16 kills, .464) unstoppable. They also kept the defense guessing in what was a poor Marquette block that totaled just one team block, as setter Madelyn Cole (38 assists, 12 digs) was strong.

In the losing effort for Marquette, Big East Preseason Player of the Year Allie Barber (16 kills, .297) did her best in matching Winters and Kloth, but also struggled defensively. Anna Haak (8 kills, .286, 12 digs) and Elizabeth Orf (5 kills, .400) added to things offensively, but the rest of the team combined for just 14 kills on a .089 mark. Martha Konovodoff added 16 digs in the back row.

As Big East play just gets going, both of these teams look ready to stick around the top and continue to contend with each other. Not to mention that a meeting in Wisconsin is to come later in the year. Specifically though up next, Creighton gets Butler and Xavier on the road next week while Marquette hosts Georgetown and Villanova.