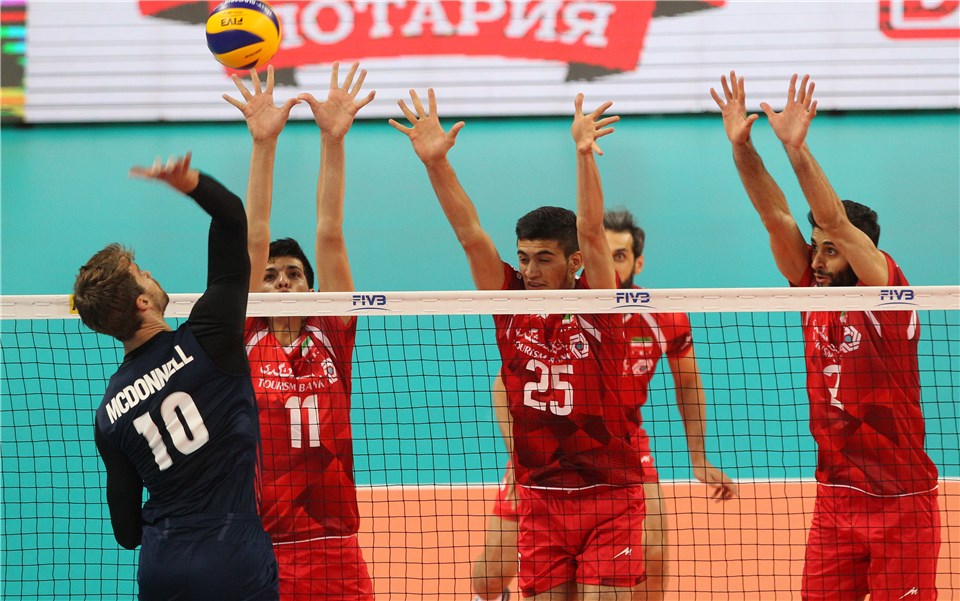 Dan McDonnell moved to the outside for the United States in their 3-0 sweep over Iran. The United States are a perfect 8-0 so far in the World Championships.  Current Photo via FIVB

The United States used a lineup of non-starters against a familiar foe and still got a win against Iran. They had already tied up 1st place on Saturday and were able to rest their usual starting lineup. Canada finished on a high note with a 3-2 victory over Bulgaria. They finish the tournament with a 5-3 record.

The United States went with a lineup that had not seen considerable time on the floor during the Second Round, and still were able to come away with the sweep. Since John Speraw only had 3 outside hitters on the roster, he had to use Dan McDonnell at that position in order to rest Taylor Sander and Aaron Russell. He started opposite of Jake Langlois. McDonnell finished with 7 points on 4 kills and 3 aces. Langlois broke into double-digit scoring with 10 points on 8 kills, 1 block, and 1 ace.

Ben Patch led the United State at opposite on 17 points. He posted match-highs in kills (13) and blocks (4). Jeff Jendryk, fresh out of Loyola University, scored 9 points in the middle on 6 kills, 2 blocks, and 1 service ace. Taylor Averill, who started some matches in Round 1, finished with 6 points on 4 kills and 2 blocks. Kawika Shoji set the United States to a 53.3% attack average.

Milad Ebadipour was the only Iranian player to reach double-digit points. The outside hitter scored 10 points on 7 kills, 2 blocks, and 1 service ace while hitting 35%. Amir Toukhteh scored 9 points in the middle for Iran on 6 kills and 3 service aces. Saber Kazemi contributed 8 points in a losing effort. The opposite who was filling in for Amir Ghafour, scored points on 6 kills, 1 ace, and 1 block. Saeid Marouf set Iran to a 46.1% hitting percentage.

While they were just playing for pride, Canada was able to finish the World Championships with a win over the host, Bulgaria. John Gordon Perrin led Canada again with 18 points in the 5-set affair. He hit 50% on his way to 15 kills. Perrin also chipped in 2 blocks and 1 service ace. Nicholas Hoag was right behind with 15 points on 12 kills, 2 blocks, and 1 ace. Lucas Van Berkel had a good showing in the middle with 13 points on 7 kills and a match-high 6 blocks.

Sharone Veron-Evans scored 9 points at the opposite for Canada. He scored on 6 kills, 2 blocks, and 1 ace while hitting 60%. He played in all 5 sets on Sunday, though started the tie-break on the bench as a substitute. Jay Blankeneau set Canada to a 54.3% attack efficiency. The win moved Canada into 2nd place, but it was not enough to qualify them for the Third Round.

Nikolay Uchikov came off the bench in the 2nd set to lead Bulgaria with 20 points from the opposite position. He posted a match-high 19 kills and 1 block. Todor Skrimov was right behind with 16 points on 14 kills, 1 block, and 1 ace. Nikolay Penchev replaced Valentin Bratoev in the 3rd set and finished with 10 points on 7 kills, 2 aces and 1 block. Georgi Seganov set Bulgaria to a 47% hitting percentage in the loss.