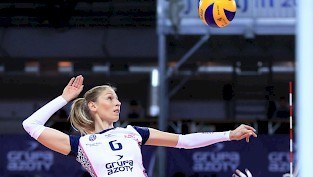 Chemik Police haven’t had much trouble reaching their undefeated record, as the team has swept a majority, only going five sets with Wroclaw.

The league’s next matches come on December 30 with Commercecon Lodz facing Bielsko-Biala and Ostrowiec Swietokszyski taking on Budawlani Torun.

Trefl Sopot still has a chance to make it into the right team playoffs with the league, but will need to win their next few and have Muszynianki Muszyna, Pila or Bydgoszcz lose a few matches to make it.

The top eight teams in the league will advance to the playoffs and are as such:

To lead the men’s PlusLiga league is Kedzierzyn-Kozie who has a one match advantage over Belchatow with a 13-2 overall record.

The top-ranked team’s last match came to Maaseik, where the squad swept them in an easy 3-0 matchup. Kedzierzyn-Kozie is set to face KS Espadon Szczecin on December 30.

PlusLiga will wrap up on April 1 with a match between Rzeszow and Kedzierzyn-Kozle, who look to keep their first place ranking to take the league title.