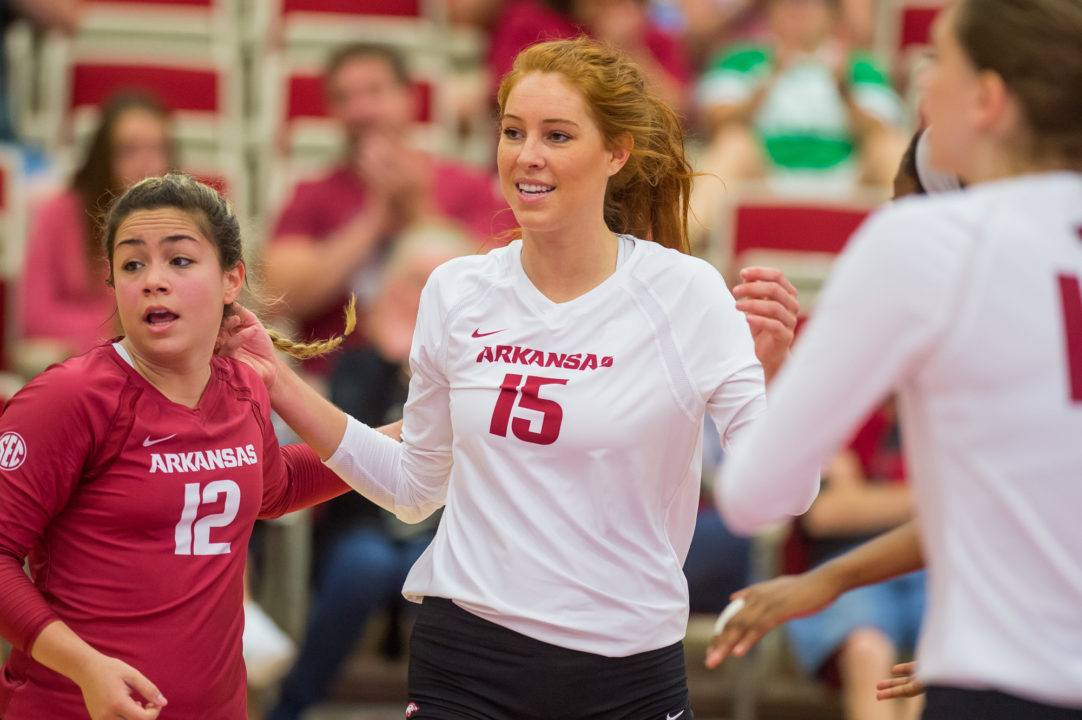 The Razorbacks hit a season high .374 hitting percentage in three set sweep over LSU who hit for .209.

LSU was led by Gina Tillis with 11 kills. Teammate Cheyenne Wood picked up 12 digs for the Tigers.

Arkansas’ next home match is Sept. 30 when it welcomes Missouri to Barnhill Arena for a conference matchup at 6 p.m. on the SEC Network. For more information about tickets, fans can call 800-982-HOGS (4647) or buy tickets online.

After back-to-back tandem blocks from Rippee and Ana Sofia Jusino to clinch the first set, Arkansas (3-10, 1-0 SEC) jumped out to a 6-0 lead in the second after a kill from Voelzke. Later in the set, Rippee posted consecutive service aces for a 17-10 lead. The Razorbacks’ advantage reached as high as 10 points at 24-14 after a contact error on LSU (5-8, 0-2 SEC). An LSU service error secured a 2-0 match lead.

With the score tied at 7-all in the third set, Arkansas won seven of the next nine points and led 14-9 after Harbin and Breana Jones teamed up for a block. Kills from Voelzke and Jusino pushed the lead to 19-12 which forced the home team to call its second timeout of the set. Voelzke brought the Razorbacks to match point with another kill, and two plays later, Jusino put down her sixth kill to secure the road sweep.

Flory’s Thoughts
“I’m disappointed in our preparation. I thought we fought really well at Auburn, but we didn’t show that same fight today. Our upperclassmen have to step up and fight for this season.”

What’s Next
The Tigers continue conference play with two matches next weekend. LSU takes on Texas A&M at 7 p.m. Friday and Missouri at 1 p.m. Sunday. The match against the Aggies will be streamed live on SECNetwork+ through WatchESPN.com and the app. The matchup between Tigers will be live on the SEC Network.

Opening Set
LSU and Arkansas went back and forth in the opening set with 12 tie scores and five lead changes. The Tigers hit .227 in the opening set to the Razorbacks’ .333. Outside hitter Gina Tillis led the way in the set for LSU with seven of LSU’s 15 kills but the Tigers’ four service errors ultimately doomed the squad.

Second Set
Arkansas dominated the second set, leading by as many as 10 points and never giving up the lead from the beginning. The Tigers ran up 11 kills and six errors as well as three service errors.

Final Set
The Razorbacks came out on fire after the intermission and did not allow LSU to get in a rhythm, putting away 20 balls and committing just two errors for a .514 hitting percentage. LSU hit .242 in the final frame with 11 kills and three attacking errors. The Razorbacks also out-blocked LSU 3-1.

Team Notes
>> Tillis put away 11 kills to lead the way for LSU. She has now hit double-digit kills in nine matches this season.

>> Khourtni Fears finished with seven kills and a .375 hitting percentage.

>> Lindsay Flory entered the match in the second set and finished with a team-best 15 assists.

>> Cheyenne Wood topped the team in digs with 12.