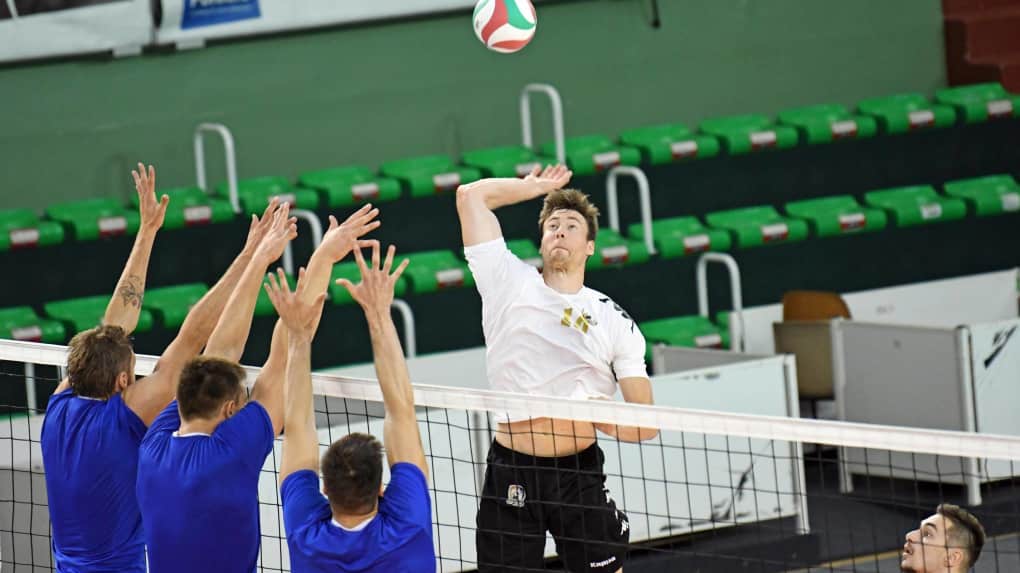 Jochen Schops has led Poitiers to an undefeated start to the season after a 3-1 win over Nantes Reze.  Current Photo via Stade Poiteven

Milan Pepic was back at full force for Ajaccio, but this time he led his team to a victory over the defending champions. Pepic had 27 points on 23 kills, 2 blocks, and 2 aces. Thimotee Carle and Thomas Douglas-Powell scored 10 and 6 points respectively from the outside hitter position for Ajaccio. Dejan Radic and Thiebaut Bruckert scored 10 and 7 respectively in the middle. Pierre Pujol set Ajaccio to a .402 (54%) hitting percentage on the night.

While Cannes trailed late in the tie-break, they were able to will out a victory behind 30 points from Irfan Hamzagic. The opposite put away 28 kills to go along with a block and an ace. Danijel Koncilja scored 15 points in the middle on 11 kills, 3 aces, and a block. Knocilja did not commit an attack error. Jiri Kral, the other middle blocker, scored 13 points on 7 kills, an ace, and a match-high 5 blocks. Martin Mechkarov scored 9 points and Gilles Lomba registered 12 from the outside.

Jean Patry bounced back from a mediocre performance on Friday to score 24 points on Tuesday. The opposite put away 19 kills, 2 blocks, and 3 service aces. Levi Cabral put up 13 points from 10 kills and 3 aces. His counterpart on the outside, Thiago Sens, scored 15 on 11 kills, 2 blocks, and 2 aces. Though Sens had 8 errors in attack as well. Montpellier only got 2 kills out of the middle in the loss.

Rennes moved to 2-0 and with a perfect 6 points behind 18 points form Bram Van Den Dries. He finished with 14 points kills, 3 blocks, and 1 ace. Kamil Baranek scored 14 points from 12 kills, 1 block, and 1 ace. Krasimir Georgiev scored 11 points in the middle. including 8 kills. Gustavo Delgado didn’t commit an attack error on his way to 8 kills on 12 attempts from the outside.

Dan McDonnell led Tourcoing with 11 points, That is quite an impressive feat for a middle blocker. He finished with 9 kills and 2 blocks. Ronald Jimenez scored 10 points on 10 kills from the right side.  Those were the only players for Tourcoing to reach double digits. They hit .361 (51%) behind the setting Matthias Valkiers.

Jordan Corteggiani helped get Toulouse their first win of the season with 14-point performance. The starting opposite scored on 11 kills and a match-high 3 aces. Andre Radke put up a match-high 5 blocks to go along with 3 kills and an ace in the middle. Pierre Derouillon scored 9 from the outside with 8 kills and an ace. Toafa Takaniko set Toulouse to a .403 (60%) hitting percentage.

Arpad Baroti led the match with 17 points, but that was not enough for Narbonne to earn their first win of the season. He scored from 13 kills, 2 aces, and 2 blocks in the loss. Francois Lecat finished with 9 points, including 8 kills and an ace. Alejandro Vigil put up 4 blocks to go with 1 kill and 2 aces in the middle to finish with 7 points.

Nates Reze opened up their Ligue A campagin on Tuesday but ran into Poitiers, a team fresh off of an upset of Chaumont last weekend. They learned it would take more than just one productive pin-hitter to get the job done. Peter Michalovic, the stating opposite, led the way with 25 points on 25 kills, but only hit .339 (47%) with 7 errors. That is not necessarily a dismal attack average, but it is not enough when the outside hitter only scored 6 and 3 points each. Mederic Henry finished with 12 points on 8 kills on 12 swings and 4 blocks. He did not commit an error in attack.

Jochen Schops is just a week removed from his 35th birthday, and he is showing he still has a tremendous value on the court. Schops was again the high-scorer for Poitiers on 21 points. He led the match with 3 aces and 16 kills. Zouheir El Graoui registered 15 kills on the night with a .400 (50%) attack average as an outside hitter position. Menelaos Kokkinakis finished with 12 kills, 2 blocks, and 2 aces from the left side. Facundo Santucci was the leading passer for Poitiers with 71% of his passes being positive and 48% being rated as perfect.