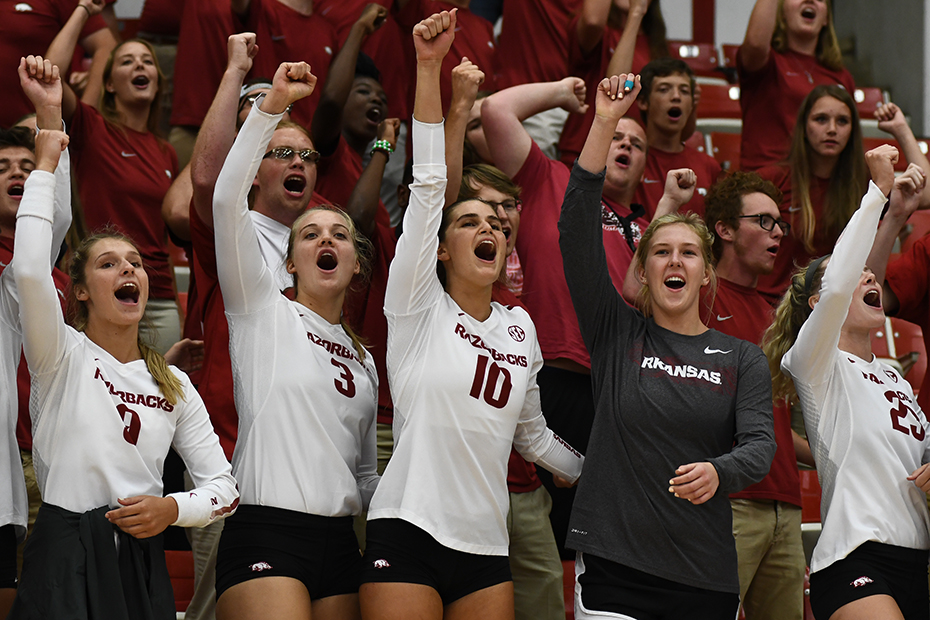 Alabama and Arkansas earned midweek SEC victories at home in straight sets Wednesday night. The Crimson Tide handed the Bulldogs their 5th loss in a row, while the Razorbacks earned the upset against the Gamecocks, who received votes this week. Current Photo via Arkansas Athletics

Alabama and Arkansas earned midweek SEC victories at home in straight sets Wednesday night. The Crimson Tide handed the Bulldogs their 5th loss in a row, while the Razorbacks earned the upset against the Gamecocks, who received votes this week.

Alabama recorded its 3rd win in its last 4 SEC matches with a sweep of Mississippi State at home Wednesday night. The Crimson Tide outperformed the Bulldogs in attack percentage (.256 to .144), blocks (5 to 4) and service aces (3 to 1) to hand MSU its 5th-straight loss.

After playing through 4 ties, the Crimson Tide used a 12-2 rally to pull ahead and establish a 21-13. Alabama held off Mississippi State to register the 25-17 win.

It was a back-and-forth battle for the second set, which contained a total of 17 ties. Alabama outlasted Mississippi State in the extended set 28-26 with a Mahalia Swink kill and Mylana Byrd block.

Up next: Sunday vs Alabama

Arkansas maintained the momentum in the second set, going up 8-3 early. The Gamecocks rallied back within 1, but that would be as close as they would get as the Razorbacks earned the 25-20 result.

After falling behind to Arkansas early in the third set, the Gamecocks fought back and gained a 2-point advantage 13-11. However, the Razorbacks did not back down, closing out the finale set 25-19 with a 14-6 match-closing stretch.

For South Carolina, Mikayla Shields posted 10 kills and 9 digs. Courtney Kohler registered a double-double with 26 assists and 10 digs, while Aubrey Ezell led the back line with 16 digs and served up 2 aces, becoming the first Gamecock to record 50 aces in a single season since 2002.