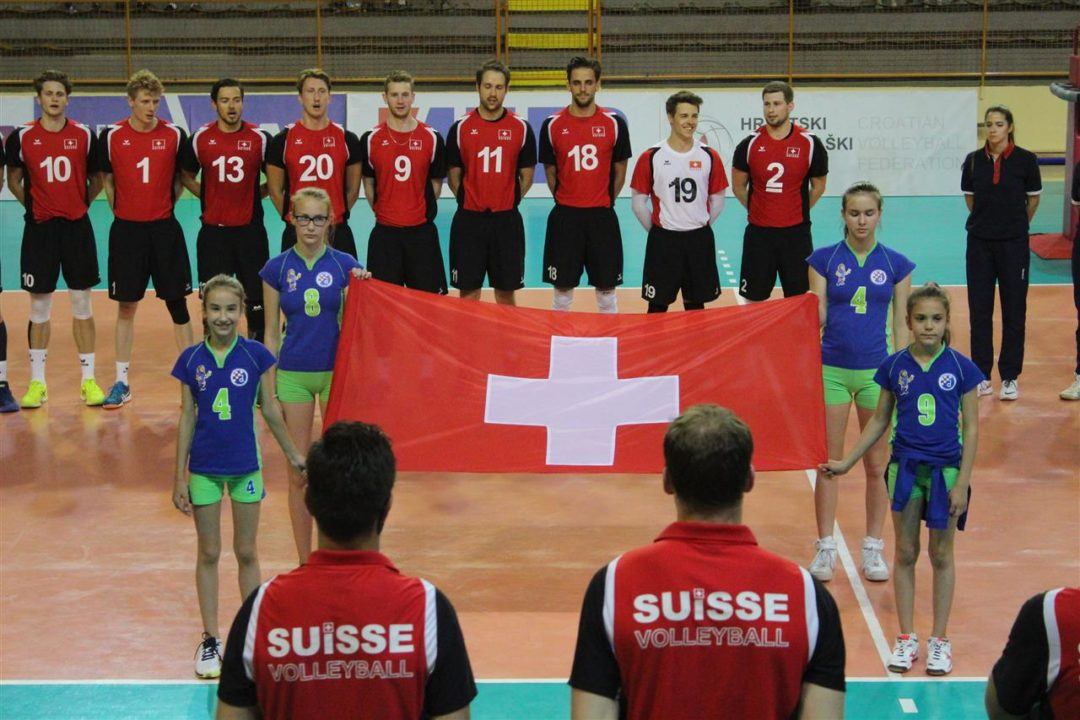 Serbia and Switzerland stay undefeated after the second day of play at the 2018 FIVB World Championship Men's European Qualifier. Current Photo via CEV

Serbia and Switzerland stay undefeated after the second day of play at the 2018 FIVB World Championship Men’s European Qualifier. The level of play in all matches has been high, with many tough tests for the top squads in Pool E.

The Serbian men’s squad had a challenging match against Denmark to complete the Day 2 sweep of the Men’s European Qualifier. The first set started as a runaway for Serbia, but Denmark stepped up to make things interesting. Late in the set Serbia was up 20-17 but the Danes came back to make it a one-point match as 23-24 (Serbia). In the end of the first, a service error from Dane Philip Metin Özari ended the first set 25-23.

The second set was a heated battle, after going up 5-1, Denmark took the early lead, which they were able to keep a three to four point margin for most of the second set. Late in the set, the Danes were up 21-18 when the Serbian crew fought back to secure a wild 34-32 victory.

The third set was still a highly competitive set, despite the 2-0 lead for Serbia, the Danes played with fire. However, it was not enough to top the Serbian squad, dropping the third and match 25-19.

Despite the loss, Denmark’s Rasmus Bruening Nielsen led in points with 15, while teammate Peter Trolle Bonnesen added another 15 points. For Serbia, Aleksandar Atanasijevic put down 14 points.

Belarus routed Norway in four sets, taking advantage of the loss of the Norwegian libero in the second to continue on in the tournament.

The first set was something of a routine for the Belarus squad, as they rolled to a 25-19 win, but the second was another story. In the second set, the Norwegian crew took a 17-16 lead but were riddled by the injury of their libero Øystein Bergum. This interrupted the play of the Norway side, with them dropping the set 25-20 to fall to 0-2 in the match.

The third set took a small lead of 16-14 in the third set, which they were able to continue with to take the third set 25-20. The fourth set got away from the Norwegian side, as the Belarus team kept up their high-intensity play to win the match 25-22.

Artur Udrys led the pack with 20 points in the match with 16 of the points coming from kills, two aces and two blocks.

Switzerland remains unbeaten in Pool E so far with a four-set victory over Croatia.

Despite a first set loss, the Swiss were able to recoup their efforts to come back in the next three sets to take the victory. Many mistakes were made on the Croatian side of the net that helped the Swiss crew to a smooth final three set win. Though there were many mistakes made, the Croatian team was able to muster up enough fire to make the match a tough battle.

For Switzerland, Sebastien Steigmeier put down a match-best 23 points, with 18 kills, two aces and three blocks.