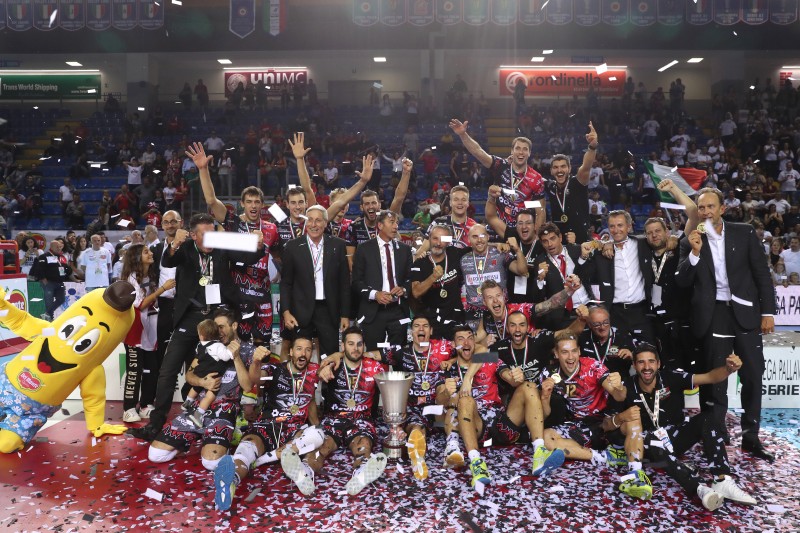 The 2017 Del Monte Italian Super Cup has concluded, sparking the beginning of the competitive playing season in Italy, with Sir Safety Conad Perugia taking the title over Cucine Lube Civitanova in four.  Current Photo via LegaVolley.it

The 2017 Del Monte Italian Super Cup has concluded, sparking the beginning of the competitive playing season in Italy, with Sir Safety Conad Perugia taking the title over Cucine Lube Civitanova in four.

The competition featured semifinal matches on October 7 followed by the bronze and gold medal matches being hosted on October 8. The team’s chosen for the event were based off their finishes last season and boiled down to Cucine Lube Civitanova, Azimut Modena, Diatec Trentino and Sir Safety Conad Perugia.

In the first match of the competition the home squad down Modena in a tough four-setter. The match wasn’t looking too promising for Civitanova after the first set as they were quickly downed by Modena 25-16. However, they rallied back to take the next three and earn their spot in the finals.

“It was a tough game, we knew this. We made a lot of mistakes but we played our volleyball until the end,” said Civitanova’s Tsvestan Sokolov.

Sir Safety started the match on a 2-0 set lead over Diatec, however, Diatec was not done and fought back in the third set to send the match into a fourth set. The final set came down to the end with Sir Safety finishing strong to take the match 25-22 in the fourth.

“It was a good game and my first as Perugia’s captain. We played some good volleyball despite only practicing together for a few days,” said Sir Safety’s Luciano De Cecco.

In a battle of a bronze medal match, Azimut Modena was able to down Diatec Trentino in four sets. The first set was handled easily by Modena but they had to fight in the second to take the 2-0 match lead in extra points. The third set was taken by Diatec by a tight 25-23 margin while Modena clinched the bronze medal with a back and forth final set that ended 32-30.

The finals were hosted in front of a crowd of 4,291 fans as Sir Safety looked for their first win over the tournament’s host Civitanova.

The first set started off in Sir Safety’s favor with a 25-20 finish, while Civitanova responded in the second with a 25-22 score to tie the match at 1-1. The third set was a runaway for Sir Safety as they dominated over Civitanova 25-17 to take the 2-1 match advantage. The final set was a tough fight for both teams, as Civitanova tried to force a fifth but Sir Safety stopped them short with a 28-26 victory.

Following the win, Aaron Russell was named the Del Monte MVP following his 21 points performance in the finals.