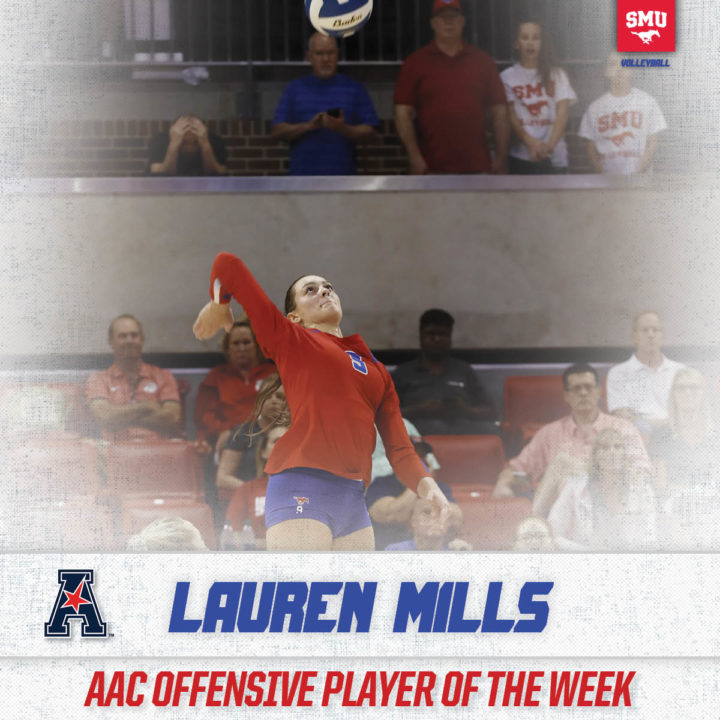 SMU's Lauren Mills garnered the AAC Offensive Player of the Week among six other honorees. Current Photo via SMU Athletics/Volleyball

SMU senior outside hitter Lauren Mills was awarded the American Athletic Conference Offensive Player of the Week award for the second time in 2017. Joining Mills on the weekly AAC honors was Giorgia Civita of Wichita State along with a list of five honorable mention players.

Mills assisted SMU to a 2-0 weekend behind 4.86 kills and 3.71 digs per set while hitting .302. The week started with a four-set win over Tulane when she posted 23 kills and 12 digs while it ended with another double-double (11 kills and 14 digs) in a sweep of Houston. This is the second weekly honor for Mills this season, with the first coming for her performance in week three.

Flipping from offense to defense, Wichita State’s Giorgia Civita also had a 2-0 week with the Shockers. In the team’s first ever conference matches as part of the AAC, she posted 6.29 digs per set, as the redshirt freshman totaled 44 digs. The honor is the second straight for Civita, who won the AAC Defensive Player of the Week last week as well.

The rest of the AAC week five honorees who came close to taking home awards can be seen below: