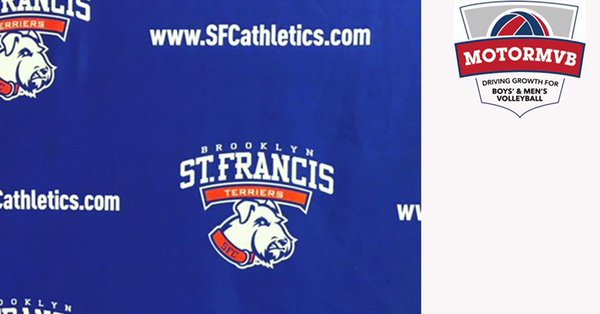 A new Division I program is coming to NCAA Men’s Volleyball, as St. Francis College Brooklyn will be adding a team in the top Division I-II classification.

“Providing an opportunity for competitive NCAA Division I Volleyball right here in New York City is something we are very excited about,” Athletic Director Irma Garcia said in the release of the news. “The support from the St. Francis College Administration to add this program shows our commitment to our student-athletes and the growth of Collegiate Men’s Volleyball.”

It’s unclear at this time what league the school will join, although being from New York would make the EIVA a possibility. Joining the IVA wouldn’t be out of the question either until that is established, but regionally they would have a handful of nearby schools in the Eastern Intercollegiate Volleyball Association.

MotorMVB Foundation – an organization who stimulates growth in volleyball – is helping to kick-start the program too, and are providing a $100,000 grant that will be dispersed over a four-year period. The chairman of the organization is actually none other than John Speraw, the UCLA and U.S. Men’s National Team head coach.

“We are experiencing an incredible growth period for boys’ and men’s volleyball in America and in the sport of volleyball in general,” Speraw added in the release. “Adding another DI program to the ranks of NCAA Division I is a significant achievement and I am proud it has happened in the first eighteen months of the MotorMVB campaign.  We expect the momentum to continue as more and more schools look at men’s volleyball. It’s rapidly growing at the youth level, a dynamic spectator sport and has a buy in of only 4.5 scholarships.”

The team already has a head coach in place too. Andy Mueller, the top assistant and recruiting coordinator for the women’s team, will be at the helm for the men to start the program. With the women’s program, Mueller was a part of an 8-21 team in 2017 that played in the Northeast Conference (NEC).

“It is a very exciting time to be starting a collegiate men’s volleyball program,” Mueller said in the release. “I have been lucky enough to work with head coach Abra Rummel for the past two seasons on the Women’s side, and am eager to continue that while building up our Men’s program at SFC. To be able to start this program and lead this team will be the highlight of my career. The sport has continued to grow in the last decade and we are thrilled to bring Collegiate Men’s Volleyball to Brooklyn. We will work tirelessly to provide fantastic experiences for our student-athletes and put New York City volleyball on the map.”

In 2018, the Division I-II classification consisted of 42 teams, meaning St. Francis Brooklyn will make it 43. They also become the 23rd college specifically in Division I to sponsor intercollegiate varsity men’s volleyball.