Hampton Bringing on Second Transfer for 2018 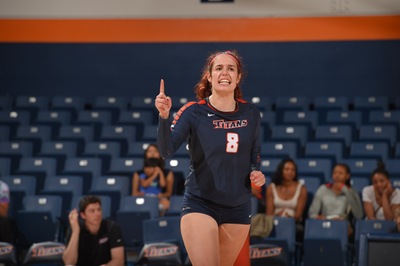 Hampton will be adding two transfers for 2018 as former Cal State Fullerton right side Megann Delgado will be joining the program for the fall. A redshirt-junior-to-be, Delgado will have two years left of play and will be eligible for the season ahead.

Delgado joins another transfer who sat out last season with a redshirt in outside hitter Sydney Sumner from NC Central/Pitt-Johnstown College. The combination helps offset the loss of one of their own in starter Reeana Richardson, who left for Charlotte.

Prior to her arrival in Fullerton, Delgado prepped at Lakewood High School in California. She played on varsity in all four seasons and earned some sort of Moore League recognition, capping off with the league and team MVP awards as a senior. She also played with Golden West on the club circuit.

Delgado will now join a group of four players who can play the right pin in senior-to-be Lena Washington (started all 30 matches in 2017) and two more newcomers in freshman Bria King and junior college transfer Sasha Saric. The 6’4″ Saric comes in from Northwest College and Montenegro after being a first-team all-conference and All-Region IX North selection.

Hampton is coming off of a 13-17 season in which they finished 7-5 as a member of the MEAC, where they made the league tournament’s semifinals.