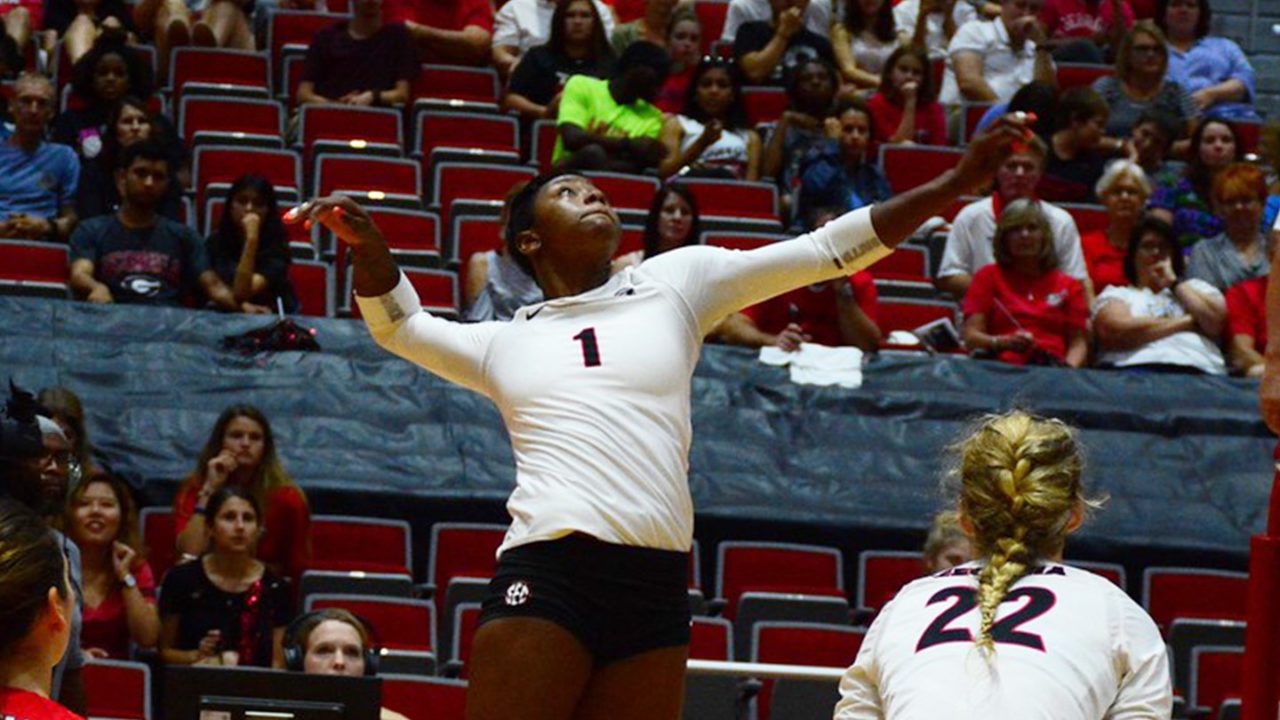 All-SEC outside hitter T'ara Ceasar recorded a double-double and hit .520 to lead Georgia past UCF and into the NIVC Quarterfinals Archive Photo via Georgia Athletics/Volleyball

A second straight sweep was in order for the Georgia Bulldogs as they earned the three-set victory over UCF in the second round of the NIVC Tournament. The win pushes them to the quarterfinals, as they await their next opponent in the round of eight.

All-SEC outside hitter T’ara Ceasar paved the way to the next round with a dominant performance on both sides of the court. Offensively she totaled 16 kills while hitting .520. On the defensive end, she added 10 digs and a block to give her a double-double.

Besides her, Georgia saw big contributions from Meghan Donovan (36 assists, six digs, four blocks), Kendall Glover (19 digs) and Majesti Bass (10 kills, five blocks) in a match where they controlled the first and last sets and edged out the second.

In that second set, Georgia had to overcome a big UCF run as the Golden Knights’ block kept them in the match with them out-blocking Georgia 13-6. A lot of it was a team effort too led by Jeanne Westney and Taylor Wickey, who each recorded six blocks. However, after that 5-0 UCF run made it 19-18, Georgia gained more separation until Ceasar put things away.

The Bulldogs now keep their season alive while UCF goes out, although by participating in the NIVC Tournament were able to hit the 20-win mark. Georgia now awaits the winner of Ole Miss and Arkansas State, which takes place tomorrow night.

ATHENS, Ga. – The University of Georgia volleyball team swept the UCF Knights 25-17, 25-21, 25-17 on Wednesday at the Ramsey Center to advance to the third round of the National Invitational Volleyball Championship.

“A lot of individuals impressed me,” Georgia head coach Tom Black said. “I thought our blocking got a lot better, and we had some really tough serving runs, especially down the stretch.”

In the first set, Georgia opened the match with a quick three points, provided from Ceasar and Ritchie kills. With junior Sydney Gilliam behind the service line midway through the opening frame, the Bulldogs collected six-straight points to take the 16-8 lead, highlighted by an ace and a pair of kills from Ceasar. Georgia closed out the set with three points for the 25-17 set.

A five-point run from the Bulldogs opened the second-set surge, produced by kills from Ritchie, Bass and Young with Glover behind the service line for the 7-3 lead. The kill-totals increased as Ritchie, Ceasar and senior outside hitter Kendall Kazor commanded a 6-1 run for the 19-13 Georgia edge. The Knights brought the score within two, but an ace from junior Sydney Gilliam and kills from Ceasar sealed a 2-0 Georgia advantage.

The Bulldogs cruised through the third set, with Katie Houser powering a kill for the 19-8 Georgia lead. The Bulldogs separated themselves by as many as nine points in the final set, securing the 25-17 victory.

“You’ve got to go one round at a time,” Black said. “Every round is going to get more challenging, so keep your eyes on the next one. That’s part of the beauty of playing in a tournament. There are just so many things that you don’t know. You just have to be adaptable whenever your number is called.”

Georgia will face the winner of Ole Miss and Arkansas State in round three of the NIVC.

ATHENS, Ga. (UCFKnights.com) – After reaching its first postseason tournament in two years, the 2017 season came to a close for the UCF volleyball team on Wednesday night. The Knights (20-14, 12-8 The American) fell in the Second Round of the National Invitational Volleyball Championship to the University of Georgia on the road, 3-0 (25-17, 25-21, 25-17).

The Knights gave the Bulldogs (22-11, 10-8) everything they could handle at the net. UCF recorded 13 blocks on the night, a season-high for three sets and the second most this year. The 13 rejections were the third most that Georgia has hit into in 2017. Jeanne Westney and Taylor Wickeyeach sent six balls back over the net. Anne-Marie Watson finished with five blocks, along with a career-high three from Kristina Fisher and two from Lache Harper. Kia Bright and Alli Sabol each had one apiece. Jordan Pingel tallied a team-high 14 digs.

Wickey, Kia Bright and Miranda Watkins powered the Knights for the final time in their careers. Bright registered eight kills, eight digs and a service ace. Wickey added a kill to go along with her team-leading tally in blocks. Watkins finished with a team-high 12 assists, five digs and an ace.

CLOSING STRONG
• The Knights finished the regular season on a six-match winning streak, the longest undefeated stretch to finish the regular season in the Todd Dagenais era, and extended it with a victory in the opening round of the NIVC against UNC Greensboro.
• UCF swept six of its final seven opponents, including a pair of dominant wins for six points in the War On I-4 over USF.
• Bright was sensational with 4.22 kills per set, and Fisher hit for 3.83 kills per set at a .343 hitting percentage.
• Wickey and Westney were undeniable forces at the net with 56 blocks and a .459 hitting clip.

SPECIAL SEASON
• The Black and Gold achieved 20 wins for the fourth time under Dagenais and the 23rd time in program history.
• The Knights finished the year in the American Athletic Conference ranked third in hitting percentage, fourth in kills and fourth in blocks.
• UCF posted an 8-3 mark at The Venue and were the only team from The American to push No. 20 Wichita State to five sets.
• 20 matches into the season, the Knights were 10-10, but the Black and Gold went 10-4 over the final 14 matches and earned the program’s 13th appearance to a postseason tournament.

GET THE APP
Never miss any UCF Knights news from your favorite team by downloading the free UCF Knights app right to your iOS or Android phone! The app provides personalized information for men’s and women’s teams, scores, schedules, loyalty programs and even breaking news.