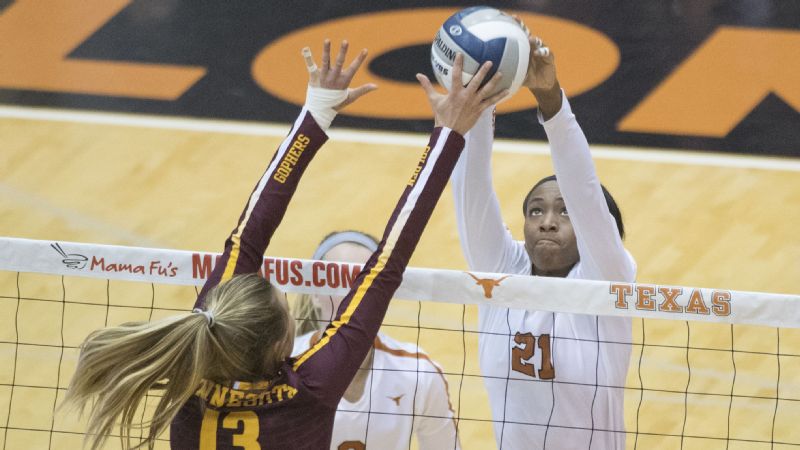 After having to sit out during the 2016 season due to academic issues, Texas' Chiaka Ogbogu refused to let that pull her down. Current Photo via Texas Athletics

After having to sit out during the 2016 season due to academic issues, Texas’ Chiaka Ogbogu refused to let that pull her down. The now senior has begun to make her mark once again during the 2017 season and is back with a purpose and to win a national title.

Ogbogu was deemed academically ineligible in the 2016 season, which was disappointing news to receive after coming off two tremendous seasons in a row. Last season, Ogbogu didn’t attend any of Texas’ matches or travel with the team at all. She did stay engaged in group texts with the team but ultimately felt that the season was not hers and didn’t belong to her.

In her time off, Ogbogu turned the negative and humbling experience into a learning lesson. She created a schedule that worked with her to get back on the court while going through an internship experience with the Dallas Sports Commission marketing team to tack on some more responsibility. In another opportunity that Ogbogu took advantage of in her offseason, she shadowed a physical therapist, which she intends to pursue following a professional playing career.

“Coming into college, I was on the pre-med route,” said Ogbogu to ESPNW. “I decided I liked the hands-on aspect of body mechanics and movements and how that all works, especially with athletes. I don’t think I could ever stray away from being around athletes or sports in general.”

The team’s head coach Jerritt Elliott didn’ t have to worry about Ogbogu during her time off, knowing that she would prepare herself for the season. This was true because currently, Ogbogu ranks sixth in blocks per set with 1.68 in the NCAA Division I for the sixth-ranked Longhorns. Additionally, she is hitting .363 on the year and has seven service aces, all of which lead Texas.

Though not practicing with the Longhorns, Ogbogu went to her former club, Texas Advantage Volleyball, four times a week, training with Ping Cao, who played for China in the 1984 Summer Olympics.

Now, Ogbogu is a captain once again for the Longhorns, helps to lead a star-studded team back to the NCAA finals. Texas returned Ebony Nwanebu and Micaya White, who are both First Team All-Americans, while Cay McCoy works her way to becoming Texas’ all-time leading digger. Additionally, the squad brought in the nations top recruit in Lexi Sun who has quickly taken over as the Longhorns top attacker while Ashley Shook, another freshman, claimed the starting setter position.

The senior is ready to continue with the season and put the team back on top. The Longhorns are now set for conference play that will begin on Saturday, September 23 against West Virginia on the road.