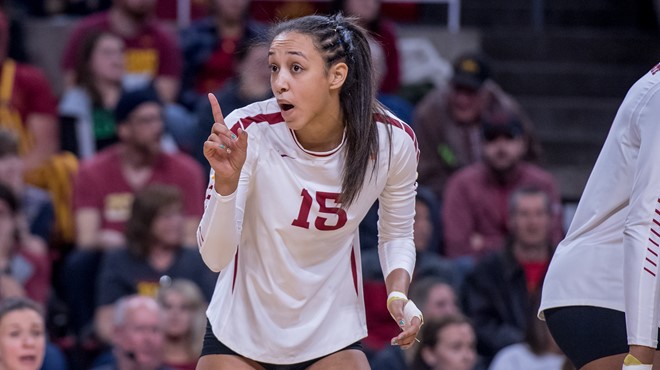 Iowa State is without a pair of middle blockers, including Avery Rhodes, due to injury. Archive Photo via Iowa State Athletics/Volleyball

Iowa State has fallen on some hard times of late, dropping five of their last seven matches including two to unranked opponents. Adding to the bad news, and heavily contributing to the results, have been the injuries in the middle for the Cyclones.

According to the Iowa State Daily, Cyclones head coach Christy Johnson-Lynch announced that sophomore middle blocker Avery Rhodes is likely out for the season following hip surgery while their other sophomore middle, Meegan Hart, fractured her finger with no timetable for return.

Standing at 6’2″ out of Waco, Texas, Rhodes started 21 matches as a freshman in 2017. This season in 30 sets of play, she averaged per set numbers of 1.97 kills on a .252 mark, 1.23 blocks (most on the team) and 0.43 digs. Her final match came at Nebraska though, which following a loss put the team at 6-4. In the past weekend without her, the Cyclones went 1-2 with losses to unranked Iowa and Syracuse, although they did sweep (RV) Wyoming.

However, filling in for her in the Wyoming victory was Hart, who appeared in all three sets and had five blocks. She was then injured though and didn’t play in the two losses. In total for the season, she has notched per set numbers of 1.67 kills on a .265 clip and 1.22 blocks (second on the team).

Herrera was successful against Syracuse with nine kills (.389) and nine blocks, but struggled against Iowa with just four kills (.167) and two blocks.

Sitting at 7-6, Iowa State will start up Big 12 action this week at West Virginia on Wednesday night before meeting #12 Baylor at home on Saturday.