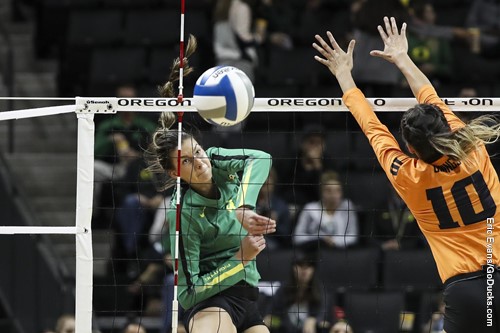 #8 Oregon swept rival Oregon State in the 'Civil War' behind an offense that hit .395. Current Photo via Eric Evans/Oregon Athletics

Eugene, Oregon – #8 Oregon took care of business against in-state rival Oregon State in straight sets behind a well-oiled machine on offense that was both efficient and balanced.

Beyond that, the defense was solid for the Ducks, as although Haylie Bennett notched nine kills while hitting .318 for the Beavers, no Oregon State player hit double-digit kills and they were held to a .179 mark as a team.

The first set was indicative of Oregon’s dominance, winning 25-14. Set two would be the tightest as there were 17 ties and 10 lead changes with the Ducks coming out on top. After that the wind left Oregon State’s sails a bit, and although the score was closer than the first, there were only two ties and no lead changes and Oregon earned the sweep.

Oregon will now head down to Los Angeles to take on UCLA in a VolleyMob Top-15 matchup. It’ll kick off a three-match road trip as all their opponents are currently ranked in UCLA, Utah and Colorado. Oregon State is already in the midst of their long venture away from home, as beyond playing this one in Eugene will have three more road matches coming at USC, Colorado and Utah – also three ranked teams.

How It Happened: The Ducks (8-1) came out fresh after a nine-day layoff, taking advantage of their well-rounded attack with lethal results. Jolie Rasmussen and Lindsey Vander Weide led Oregon with 12 kills apiece, Willow Johnson had 10 and three others had at least five.

Rasmussen, playing just her fifth match of the season after recovering from an injury, set the tone from the start, with a kill on the opening point of the first set. She had back-to-back kills as Oregon started to gain some separation at 6-4, and the Ducks broke it open with six straight points for a 14-7 lead. It was 21-14 when Ronika Stone and Johnson traded kills back and forth during a four-point run that gave Oregon the set, 25-14.

The second set went back and forth, with Oregon holding a 24-23 when Rasmussen ended it with an ace. The third set was more one-sided early on, as the Ducks used an 8-1 run to go ahead 19-9. But Oregon State (10-3) didn’t go quietly, using an 8-1 run of its own to claw back within 20-17. Sumeet Gill ended the run and reclaimed momentum for Oregon with a block, and Rasmussen ended the set and match, 25-19, with a serve the Beavers were unable to return.

Who Stood Out: The Ducks played to their strength, spreading around the attack to hit .395. They also denied Oregon State its strength, holding Mary-Kate Marshall — who came in averaging 4.90 kills per set — to four kills in the match, on minus-.042 hitting. Along with three players in double digits, Oregon got eight kills from Stone and seven from Gill, plus five from Taylor Agost. Vander Weide added 15 digs for a double-double, and Maggie Scott had 30 assists.

What It Means: Oregon coach Matt Ulmer made it clear the standard he has for the Ducks, expressing disappointment following a three-match sweep, because of the late lapse that allowed Oregon State to make a run late in the third set. The Ducks won’t be able to afford similar lapses in their next match, on the road at No. 11 UCLA.

Quotable:
Matt Ulmer, UO coach
On commanding the match most of the night
“I don’t think we let them into their game plan until late. I need them to understand that, when you have a good team down, you can’t let them back in the match.”

On Rasmussen’s improved health during Oregon’s layoff
“This is the best she’s looked, ever, in an Oregon uniform. Our week off did what it was supposed to do for Jolie.”

Notable: The Ducks extended their winning streak to seven matches, and have won 17 straight sets. … Vander Weide’s double-double was her team-best fifth. … Oregon holds a 74-43-1 lead all-time in the Civil War series. … The Ducks hit .300 or better for the fifth time in nine matches this fall. … Oregon State was the eighth UO opponent in nine matches to hit less than .200.

The turning point in the match came late in the second set. The teams exchanged blows throughout the set with Oregon going up three points on two occasions but the Beavers fought back to take the lead at 20-19. Leading 23-22, Oregon called timeout. A kill for the Ducks led to an error by OSU and an ace by Oregon, who stole the set 25-23.

“That was a big momentum swing,” head coach Mark Barnard said. “We made a couple mistakes in a row and didn’t make them hit the ball. We just didn’t challenge them at that moment. That’s hard to come back from.”

Haylie Bennett recorded nine kills, including the first three of the match over just 22 attacks. Her nine kills continue a strong stretch of play for Bennett who recorded 28 kills last week from her opposite position. Maddie Goings added seven kills and seven digs for the Beavers.

“Our freshmen were our best attackers tonight,” Barnard said. “It isn’t very often that Mary-Kate has an off night, but it happens to the best of them. But Haylie and Maddie had to step up and they did a nice job.”

Game Notes: Haylie Bennett led the Beavers with nine kills … it is the first time this season that Mary-Kate Marshall did not lead the team in kills … junior transfer Shekinah Clarke recorded the first kills (3) and block (1) of her OSU career.

Next Up: Oregon State returns to action Sunday afternoon at No. 21 USC at the Galen Center in Los Angeles. First serve is scheduled for 1 p.m. and will air on Pac-12 Oregon and Pac-12 Los Angeles.