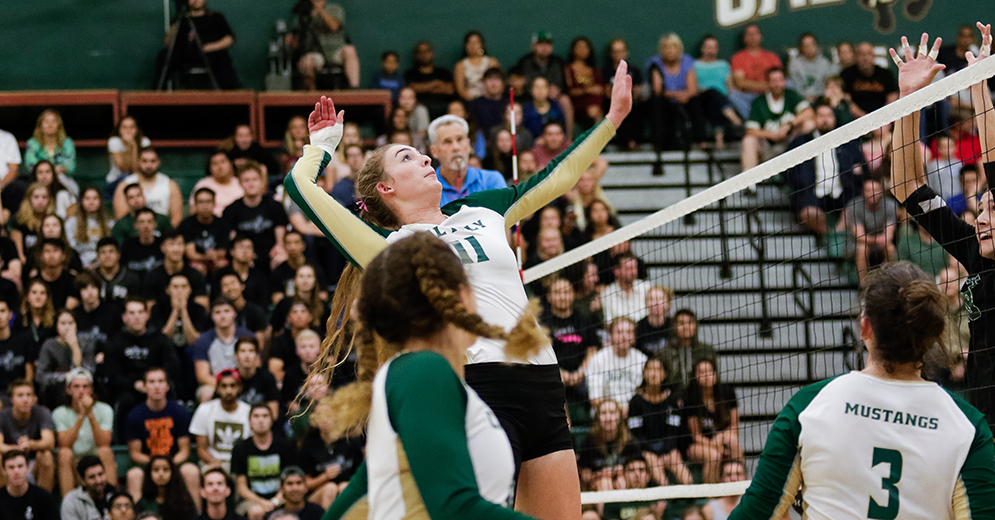 Plenty of headlines came into the match, as not only was it an opportunity for Cal Poly to earn a top notch win over a Pac-12 school, but former Bruin Torrey Van Winden – who transferred to the Mustangs last season – got to star against her former team with 18 kills, 13 digs, 3 blocks and 2 aces. It was also a rematch of a 2017 NCAA Tournament second round match in which UCLA won.

That gives Cal Poly some revenge for last season, but it also is a huge victory for their future resume. No other currently ranked opponents sit on the schedule the rest of the way for Cal Poly, so if they were to run through the Big West and other matches, they needed a big win like this one to have a chance at hosting in the first two rounds of the NCAA Tournament.

In the losing effort for UCLA, sophomore Jenny Mosser (13 kills, .189, 16 digs) had her fourth double-double and Savvy Simo also tied her career high in digs (20). Madeleine Gates (10 kills, .242, 6 digs, 3 blocks) also tacked on double-digit points, but the rest of the team – with some bright spots – hit just .148. They’ll look for similar performances tomorrow night, but hope to get more from the supporting cast.

This won’t be the last match between the two, as the NCAA Tournament rematch will be replayed tomorrow night as well, with Cal Poly looking to extend their home winning streak to 13 and UCLA looking to bounce back.