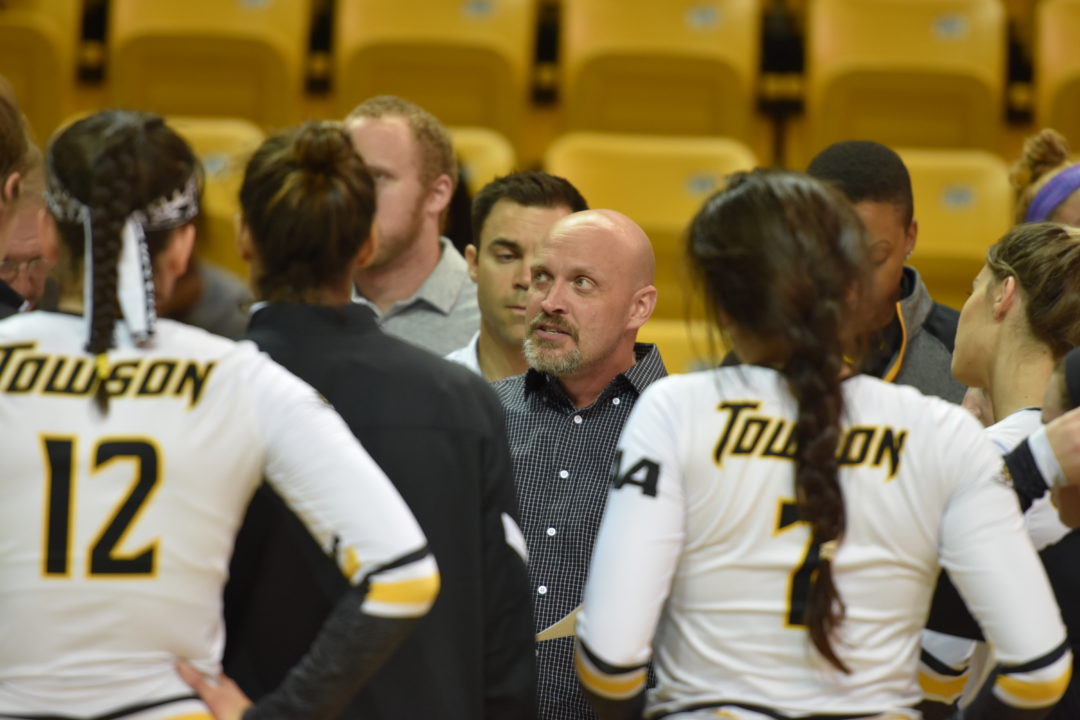 Towson overcame a 2-0 set hole to down Colgate in five as they will meet Syracuse in the second round of the NIVC Tournament after the Orange defeated Albany. Archive Photo via Towson Athletics

The Orange were tested early playing against America East regular season champion Albany, but worked their way to a four-set victory. The win pushes them to the second round of the NIVC Tournament, which will be played tomorrow again in Hamilton, New York.

Albany came out firing early as they established four options that would go on to reach double-digit kill marks. Of the quartet, Danielle Tedesco (10 kills, .320, five digs, five blocks) and Tatiana Tiangco (10 kills, .211) were the most efficient.

However, Syracuse found its response by feeding Santita Ebangwese to the tune of 13 kills (.345). She also added six blocks and five digs. The other key in turning things around after losing the first set and winning the next three was a feisty defense that kept plenty of strong shots alive. Ella Saada was the leader with 24 digs to give her a double-double (11 kills) along with Jalissa Trotter (41 assists, 17 digs).

Overall for the match, Syracuse had a small edge in hitting percentage (.208 to .188) and blocks (8-6) while owning a larger edge in digs (85-70) and aces (10-4). The ladder was also key as the Orange hit their target repeatedly and put Albany in tough positions.

What a run it was for Albany though, who started the season 0-12 but went 11-1 in America East play. However, even as conference champions they fell in the tournament so didn’t make the big dance but still got to experience postseason play in the NIVC. For Syracuse, they continue their postseason in the round of 16 tomorrow as they will face

In the second match of the pod, Towson fell behind 2-0 in sets on the road but fought it off to win in five and keep their season alive. They now head to the second round of the NIVC Tournament as a chance at a 30-win season is still alive.

Colgate was the clear better team in the first two games, as they never gave up the lead and were only tied twice besides when things were 0-0. Alli Lowe (25 kills, .283) dominated in the match and the pair of sets while Katie Stansbury (12 kills, 21 digs) and Lauren Sanderson (51 assists, 10 digs) logged double-doubles.

The third switched that around though  Towson soared in front toward the middle of the set and took their stand at 25-19. That’s all the momentum they needed as they took the fourth to force the decisive fifth. Give plenty of credit to Carola Biver (11 kills, 13 digs) and Julymar Otero (10 kills, 13 digs) – two players who notched double-doubles – who had some struggles but kept swinging. That turned out to be a perfect metaphor for Towson in the match, who had some struggles but kept attacking.

After overcoming the deficit, Towson will stick around Colgate for one more as they look to take down an ACC opponent in Syracuse tomorrow with an NIVC Quarterfinal spot up for grabs.