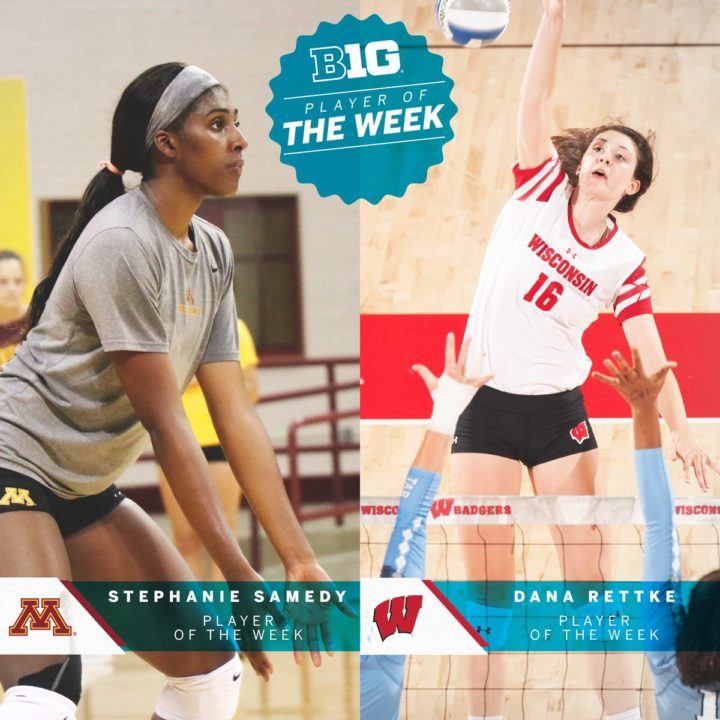 A pair of freshman earned the first 2017 Big Ten Player of the Week award in Stephanie Samedy and Dana Rettke. Archive Photo via Minnesota Athletics/Volleyball

Two freshmen made immediate impacts for both Minnesota and Wisconsin in week one in Stephanie Samedy for the Golden Gophers and Dana Rettke for the Badgers. Both schools were hit hard with departing talent but brought in dynamic recruiting classes, and were able to see early returns as each side scored a top 10 victory over North Carolina.

Samedy, an opposite from Clermont, Florida, averaged 4.43 kills and 3.86 digs per set on a .315 hitting percentage in the opening weekend. Beyond their defeat of North Carolina, including one lopsided 25-7 set, the Gophers also took down Louisville in four sets.

Fellow freshman, Dana Rettke, was a monster in the middle for the Badgers in week one. She averaged 5.0 kills and 1.8 blocks per set while hitting at a .619 clip as Wisconsin took down Louisville and North Carolina in three-set fashion.

Beyond the two freshmen, junior middle blocker Ali Bastianelli  earned the Big Ten Defensive Player of the Week for Illinois. She totaled 2.7 kills and 2.5 blocks per set as Illinois went 3-0 in the first week.

The Setter of the Week in the conference also went to a Wisconsin freshman as Sydney Hilley earned the award. She averaged over 13 assists per set as she collected a double-double against North Carolina as she responded nicely to the large shadow left by Lauren Carlini.

All of the award winners can be seen below: