Likely for geographic and monetary purposes, Ohio State was surprisingly pushed behind Harvard to appear in the play-in-game. Archive Photo via Jay LaPrete/Ohio State 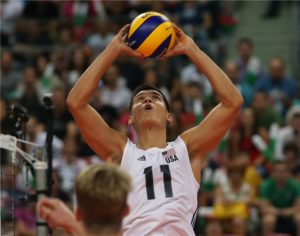 After falling behind Loyola Chicago in the middle of the season, Ohio State was pushed by star senior Nicolas Szereszen and company to a co-MIVA regular season title and a postseason championship to boot. That carried the Buckeyes to the NCAA Tournament for the third consecutive season, where they will look to repeat the successes they had in the first two trips as back-to-back National Champions.

That pedigree of success had no effect on this year’s seeding though – nor should it. But what was a bit surprising was that they were slated to be a part of the play-in-game as opposed to being the last team with a bye from that match. With King winning the Conference Carolinas and Harvard winning the EIVA Tournament, it seemed like a foregone conclusion that those two would be facing off.

Add to it the comparison in team resumes. Ohio State is 23-5, won the MIVA (a tougher league than the EIVA) regular and postseason titles. Their RPI headed into last week was seventh (and likely rose a spot or two) with their best wins of the season coming over #7 Loyola Chicago (twice), #8 Lewis (twice) along with a handful of other MIVA and even EIVA opponents. Harvard on the other hand was 13-13, didn’t win the EIVA regular season but won the tournament. Their RPI headed into last week was 22nd (which will also likely rise a few spots) and their best wins of the season are over (RV) Princeton and #18 Penn State – who Ohio State also beat twice. It’s really not a discussion of resumes.

At the end of the day, the NCAA has monetary involvement in the tournament, and as we’ve seen in the women’s volleyball tournament uses geography to put together the bracket as opposed to a true S-curve. So instead of dealing with the extra costs of having Harvard take on King (a little over 800 miles apart), the NCAA must have decided it was worth not paying the extra money and instead putting Ohio State in the play-in-match with King (about 360 miles apart).

While it’s unfair to Ohio State, it’s also unfair to King. It would have been a much better opportunity to win their first ever NCAA Tournament match against Harvard than the Buckeyes. It makes a bit more sense in the women’s tournament where everyone starts in the same round and no bye is involved. Sliding a team down from having a play-in-bye to having to play an extra game makes using the geography argument invalid since it really does change the competition and path to a title.

Maybe this will be what Ohio State needs though for extra motivation as now they can play the underdog card and have a chip on their shoulder – which should be a heckuva combination for a team who won the title back-to-back seasons. They begin their NCAA Tournament journey on Thursday against King at 7 p.m. Eastern Time in Columbus.