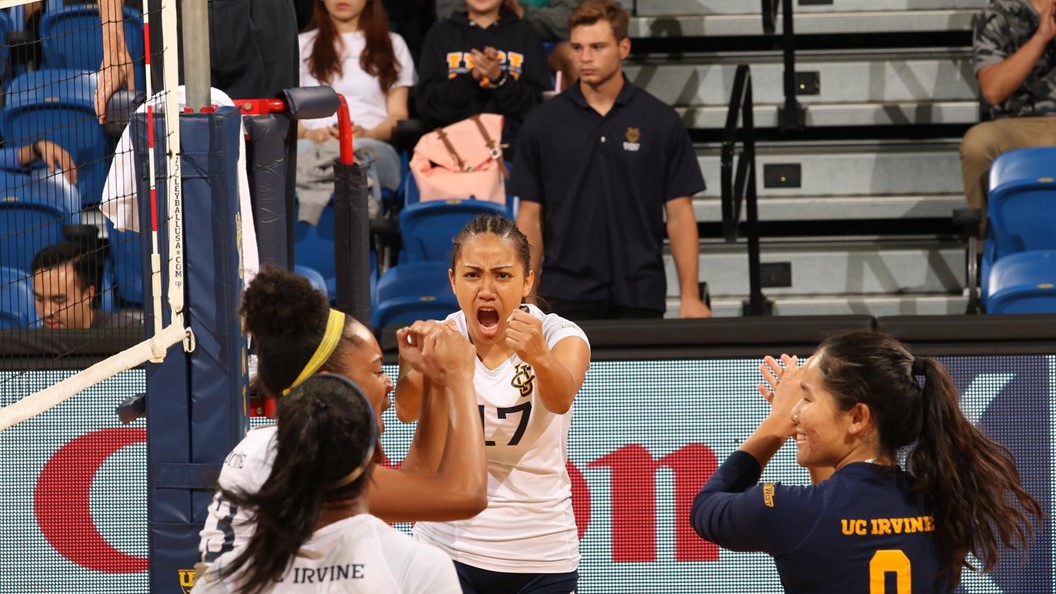 After losing their 2-0 set lead, UC Irvine survived Pacific in a fifth set to advance to the NIVC Quarterfinals. Archive Photo via UC Irvine Athletics

Both sides showed fight and overcame obstacles, but at the end of the match it was UC Irvine coming out with the victory in five sets over Pacific. The win sends the Anteaters to the NIVC Quarterfinals while Pacific’s season comes to a close after almost overcoming a 2-0 set hole.

The first set started as a back-and-forth affair, with 11 ties and four lead changes occurring throughout the set. Harlee Kekauoha (16 kills, seven digs, three aces) proved to be too much for Pacific to handle though, as she would notch seven kills on nine swings with no errors in the opening set. Fittingly so, she put down the final two kills as UC Irvine scored the final four and six of the last eight in the set.

Kekauoha continued to play well in the second, but with extra attention on her she got plenty of help. One of those teammates to step up was Haley Desales who would go on to lead the team with 17 kills as part of her double-double (18 digs).

Pacific responded in the third by scoring the first three as Emily Baptista (19 kills, nine digs, four aces, three blocks) and Andie Shelton (12 kills, 15 assists, 16 digs, two aces) each had a kill and a block assist at the start. From there, they pushed ahead and never let UC Irvine tie in the game as they took it 25-19. With the season still hanging in the balance, Pacific once again rode out in front after things were more even early in the fourth. The Tigers grabbed the lead toward the middle of the set before taking 10 of the last 12 to force a fifth.

The Anteaters didn’t let Pacific grab the early edge in the fifth though, as they snagged an 8-5 advantage at the switch. After moving forward with that lead to 11-7, Pacific used a 3-0 run to tighten the game. Then, the Tigers would stay in striking distance until they tied at 13. A block by Makayla Wolfe (eight kills, .333, nine blocks) switched back the energy and gave UC Irvine a match point opportunity, which they immediately took advantage of on the next point to wrap things up.

At this point in the season the phrase ‘survive and advance’ gets thrown around a lot. In this case, that’s exactly what both teams were doing. Pacific crawled back from down 2-0 in sets to have a chance at keeping their season alive, but finally when UC Irvine had their backs against they ropes they responded as well.

Next up, UC Irvine awaits their quarterfinal opponent. The match will take place somewhere between December 3-5, as they will meet the winner of the Texas State pod (Texas State/Rice/SMU/Texas Tech).

The Anteaters win their second consecutive post-season match after only having one post-season victory in program history (2003 NCAA).

UCI will have to wait until the Texas State quad is completed on Friday to find out the next opponent.

The Anteaters posted a season-high 11 blocks, behind an impressive performance by middle blocker Makayla Wolfe. The sophomore had four solo blocks, which ranks tied for sixth in the UCI match record book with three of those solo rejections coming in the fifth set.  On the night, the reigning Big West Player of the Week posted a season-high nine total blocks to go with eight kills.

The Anteater offense was led by pin hitters Haley DeSales and Harlee Kekauoha. DeSales topped the squad with her 10th double-double of the season, recording 17 kills and a season-high 18 digs plus two service aces. Kekauoha followed with 16 kills and three aces.

Setter Ali Koumelis recorded 45 set assists and 16 digs, just one shy of her season high, while libero Luna Tsujimoto had a match-high 20 digs.

UCI led 13-10 in the first set before Pacific went on a 5-0 run, which included three consecutive aces, to move in front 15-13. UCI would trail 20-19 then used four Harlee Kekauoha kills, an ace by Haley DeSales and a block by Kekauoha and Makayla Wolfe to end the set, 25-21.

UCI would use the momentum from the first set and jump out to an early 5-1 lead in the second set. UCI would extend the advantage to 8-3 on back-to-back kills by DeSales. The Anteaters would put the set out of reach on a 7-1 run to expand the margin to 21-10 and finish on an Idara Akpakpa kill, 25-13.

Pacific took control early in the third set with a 9-2 lead. UCI chipped away and got within 13-10, but the Tigers would answer with the next three to move the back to a 16-10 advantage. UCI would edge within 21-18, but Pacific would score four of the next five to win the set 25-19.

Four consecutive Anteater attack errors, three by way of blocks, helped Pacific to a 7-4 lead in the fourth set. The Tigers would cruise to a 25-13 victory to force a deciding set.

In the fifth set, UCI created some separation on a solo block by Makayla Wolfe and a DeSales kill to go up 5-2. Back-to-back kills by Ali Koumelis and DeSales extended the lead to 7-4. Pacific would scored three in a row to creep within 11-10, but a Kekauoha kill stopped the momentum, 12-10. After a Pacific kill, Wolfe had another solo stuff to give UCI the 13-11 cushion, but the Tigers battled back to tie the set 13-13. Another Wolfe block and a Pacific attack that flew wide sealed the win 15-13.

STOCKTON, Calif. – The Pacific women’s volleyball team dropped just its third contest at home this season after falling in five sets (21-25, 13-25, 25-19, 25-13, 13-15) to UC Irvine in the second round of the National Invitational Volleyball Championship (NIVC) Tournament Wednesday night at the Alex G. Spanos Center.

The Tigers conclude their 2017 campaign with a 17-14 overall record, which included the program’s best West Coast Conference finish since 2014.

Andie Shelton earned her fourth triple-double of the season with 16 digs, 15 assists, and 12 kills against the Anteaters. The Stockton native also hit a team-best .321 after committing just three errors in 28 total attempts.

Defensively, seniors Katrin Gotterba and Janie Feldsher were outstanding. Gotterba was key in leading the Tigers off the block. The libero collected 19 digs against UC Irvine to bring her career total to 1,867, which currently ranks second on the all-time digs list. Feldsher had a hand on seven of Pacific’s 10.5 team blocks.

UC Irvine took a lead to start the match, but the Tigers answered back by tying the game at 3-3, 6-6, and 8-8. Pacific was able to obtain its first lead on three-consecutive service aces by Emily Baptista, giving the Tigers a 14-13 edge. The two teams were tied four more times before the Anteaters went on a 4-0 run at 21-21 to snag the 25-21 set one victory.

In the second set the Anteaters were in complete control. UCI took a quick 8-3 lead, but Pacific challenged back with a 5-1 run of their own to come within one point of the Anteaters (9-8). UC Irvine then rode a 13-1 run to put the set out of reach (21-10).

Heading into intermission it looked as thought the Tigers season was coming to a close, but Pacific had other plans in mind as they came out with a 10-3 lead to start the third set. The Anteaters has some short runs, but the Tigers were able to hold at least a three point lead throughout the set and finished with a comfortable six-point win (25-19).

Pacific took its momentum into the fourth set, going 11-6 to start and forcing UCI to take its first timeout. Pacific would only allow the Anteaters another seven points in the set. At 18-12 the Tigers went on to win seven of the next eight points to force the program’s eighth five-set match this season.

The Anteaters took a small lead in the deciding match and the Tigers played behind nearly the entire set, until an attack error by UC Irvine’s Haley DeSales tied the set up at 13-all. Consecutive Pacific attack errors handed the Anteaters the victory and a berth to the third round of the NIVC tournament.