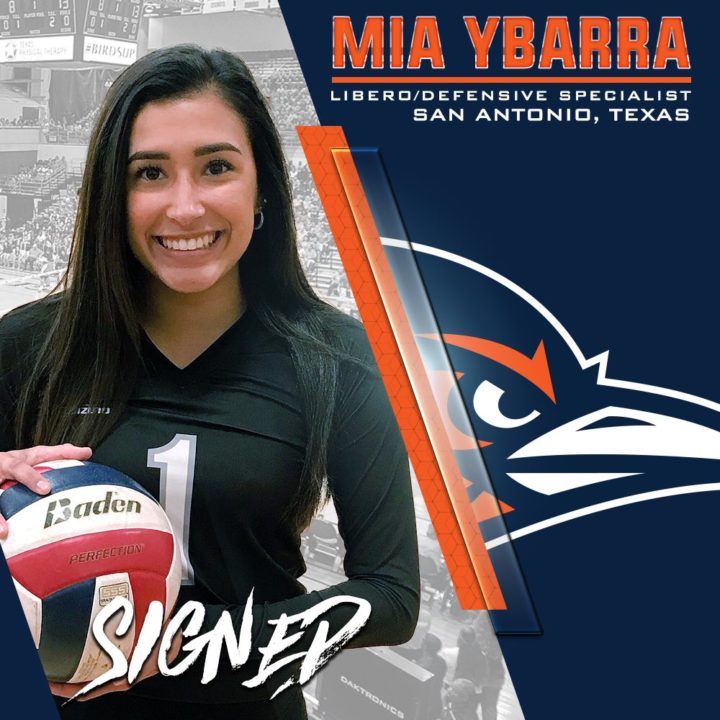 Class of 2018 DS/L Mia Ybarra has committed to and signed with UTSA. Current Photo via UTSA Volleyball/Athletics

Class of 2018 defensive specialist/libero Mia Ybarra has committed to the UTSA women’s volleyball team. The 5’4″ back-row player was originally committed to Louisiana-Monroe, but switched – possibly after a coaching change was made – and has signed her National Letter of Intent with the Roadrunners.

Ybarra becomes the third commit to the program for 2018 in the VolleyMob database, including Mia Perales, who plays at the same club team with Ybarra.

That club team is Alamo Volleyball Association – specifically the Alamo 18 Premier team. Ybarra also plays at her high school – Clark High School – in San Antonio, Texas. This past season, Ybarra helped Clark to a 38-5 record in which they mad the Regional Quarterfinals following a co-district championship.

Individually, Ybarra notched 655 digs (5.4 per set) and 34 aces (0.3 per set) as a senior according to her MaxPreps profile. That helped her earn the 2017 NISD Defensive MVP. She also recorded similar numbers as a junior and sophomore on the varsity squad.

UTSA is fresh off of a 12-16 season in which they went 9-5 playing in Conference USA. They return three defensive specialists to Ybarra’s position in 2018, but two are seniors who will depart following the season with another listed as a junior.