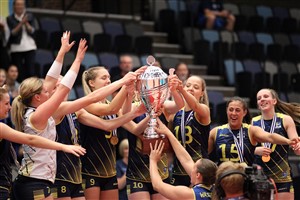 Sweden earned promotion to the 2019 Golden League with their win in the Silver League of the 2018 European Volleyball League. Archive Photo via CEV

The final two matches of the Silver League wrapped up today, putting a close to both Golden and Silver on the Women’s and Men’s sides. Completing the final day’s was Sweden earning gold, followed by Austria for Silver and Albania for Bronze. The win for Sweden sends them on to the aforementioned Golden League too, where they will compete in 2019.

In the gold medal match for the Silver League, Sweden was fueled by a home crowd and downed Austria in four sets. The opening two were close, but the final pair came with more distance, sending the Swedish contingent home happy. It will also send Sweden on to the Golden League in the 2019 tournament, as they earned their promotion with the event victory.

The block was fairly even, but an onslaught of five in the final set pushed Sweden to the large victory. Prior to that, it was all about the Swedish attack that logged 63 kills compared to just 44 from Austria, while the battle of the serve was fairly even. The Haaks also starred once more for Sweden and Isabelle Haak was eventually named tournament MVP.

Albania finished off their strong campaign in the silver league with a bronze medal, despite falling short of gold with a semifinals loss yesterday. It’s a tough ending for Estonia, who doesn’t earn any hardware after a 5-1 start ends with back-to-back losses.

Estonia was riddled with errors throughout the match, totaling 23 of them compared to just 10 from Albania. That ability to avoid mistakes and be more efficient hitting led to a 35-29 edge in kills. The combination of it all was a quick Albania victory in a match that lasted just five minutes more than an hour.