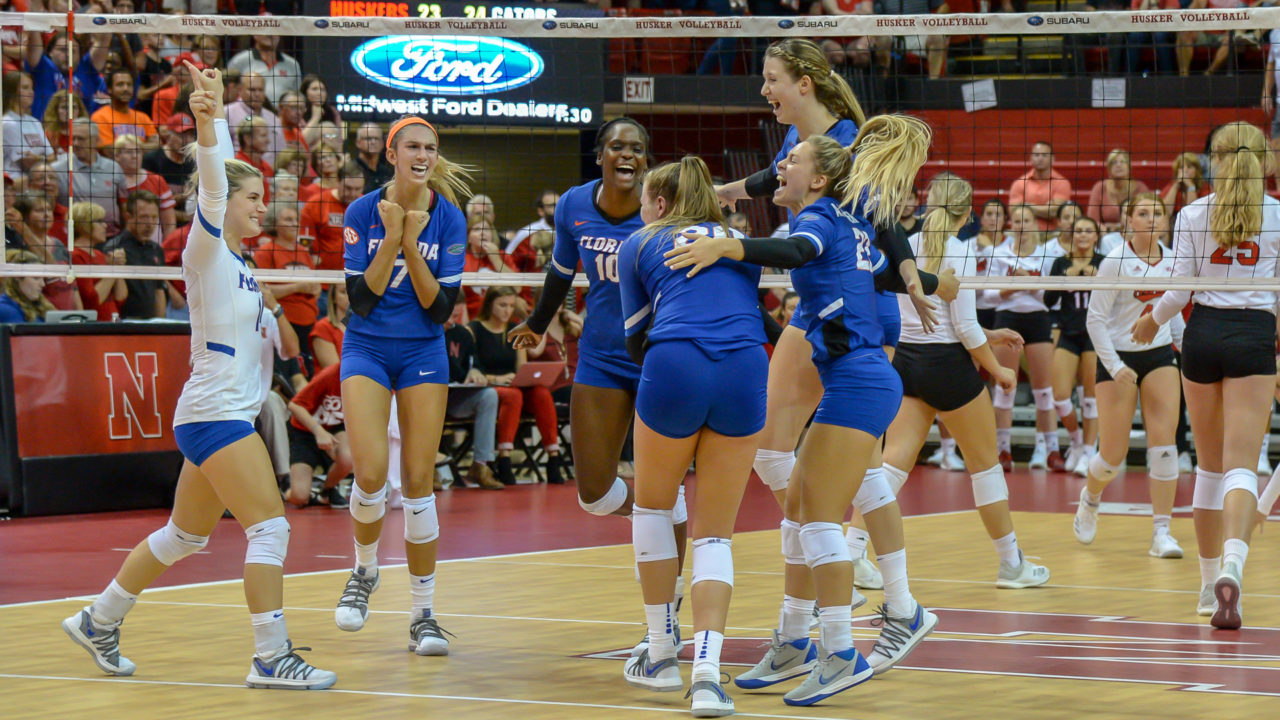 Florida upended Nebraska on night one but there were plenty of takeaways from the first day of action. Archive Photo via Steven Branscombe

It’s impossible to come away with any sweeping conclusions after just one night of play, but being that it’s the first, there were obviously some takeaways from the action. It’d be impossible to reasonably get to every team from night one and go super in-depth for the sake of time, you reading this and my typing, but I tried to come up with some notable things that stood out from night one.

Florida Surprises Nebraska, But Both Schools Look to Have Bright Futures

The rematch of the National Championship went Florida’s way, and while that has some takeaways in terms of Florida once again rising up the ranks after the VERT Challenge, what was really interesting was all off the young talent making an impact on the court.

I really thought that if Florida was going to breakout this season, not only would Thayer Hall need to be special as a freshman – which she was against Nebraska with 20 kills – but Paige Hammons would need to take large step forward. She still might – duh, it’s been one match – but wasn’t a factor in the win over Nebraska with just two kills on a negative hitting percentage and had four reception errors. Setter Marlie Monserez started over her sister and had 23 assists and 9 digs in the 6-2 as yet another freshman that highlighted Florida’s play.

Holly Carlton impacted the match. She didn’t set and only hit .188, but having her and Rachael Kramer as 6’7″ and 6’8″ blockers respectively provided the block (11 total).

Nebraska didn’t earn the win, but saw another step forward from Jazz Sweet (13 kills). It wasn’t her strongest match, but Lauren Stivrins (6 kills, 6 blocks) had flashes against the physically brutal Florida front line. The others had flashes as well, but were more inconsistent. Still, you could see some of the sheer talent on display – even if it wasn’t always pretty – in players like Nicklin Hames and Capri Davis who will only get better. Plus, keep in mind that Lexi Sun did not play with injury.

Beyond that, Florida looks better than we might have expected while Nebraska will obviously have to overcome their losses and it may take longer to reach their potential – which is still at the highest caliber. Regardless, both teams look to have high ceilings both in 2018 and for the next couple of seasons with their crops of youngsters.

The Panthers have high expectations for 2018 since they return all of their starters from an ACC Championship team and a second round NCAA Tournament appearance. All they did was support that notion as they began the season 2-0, including a 3-1 victory over #25 Cal Poly in which they outscored the Mustangs 75-51 in the final three sets.

Beyond all of the talent they brought back, the Panthers might be seeing growth of what was a strong option in Kayla Lund. As a freshman last season, the 6’0″ outside hitter was on the ACC All-Freshman Team. Through two matches she has grown from solid (2.35 kills per set, 1.96 digs per set in 2017) to the best early performer on the team, logging per set numbers of 4.29 kills, 2.86 digs, 0.43 aces and 0.43 blocks on a .490 hitting percentage.

If she continues this play (obviously you don’t expect hitting near .500, let alone .400 for an outside hitter), it’s just another option to push Pittsburgh up the National pantheon.

A precursor to this is that it’s not the end of the world. It’s just one day and there’s a great chance they get better at everything. The question leading into the year was whether Kentucky’s defense/passing will reach a level that they need to make a run at the SEC title and a Final Four trip.

It was solid enough against Creighton in terms of blocking and keeping balls off the floor, but passing wasn’t good enough to get their offense (that has elite options) going – something that last year’s libero Ashley Dusek mastered. Then, against USC, the defense faltered (the Trojans hit .291 and the Wildcats sans their two middles from last season only had two team blocks) while the serving wasn’t aggressive or accurate enough.

Overall though, Kentucky showed they can hang with the top teams, and losing to Creighton and USC isn’t a backbreaker. While we had them 8th in the VolleyMob Top 25, the AVCA has them 5th. To be either, they can’t just hang with top teams but need to win. They’ll get better as the season goes on and could definitely still wind up in those spots, but work needs to be done for the time being.

It wasn’t the cleanest of openers for Cal Poly as Pepperdine nabbed a set from them and then they lost to Pittsburgh in four, but the Van Windens are back and ready to roll.

Then, against Pittsburgh, those areas and the supporting cast were again in question as the Panthers lost the first set but were convincing in the final three. Of course, questions will persist about the others after the Mustangs lost some key players from 2017, including setter Taylor Nelson. Just in terms of the Van Windens though, they should be enough to dominate almost everyone but a team or two in the Big West, with the others being the difference from a national perspective.

What to think of Creighton and replacing Lydia Dimke?

The BlueJays overcame a 2-1 set deficit against the higher ranked Wildcats and won an incredible fifth 22-20. It was a tale of two halves for Creighton though, who were swept by Northern Iowa at night. After losing All-American setter Lydia Dimke, there were some questions on if Creighton could live up to the bar they’ve raised from the last two seasons.

It wasn’t the prettiest overall hitting percentage for the offense (.191), but considering how tight the match was, who it was against and that it was the season-opener, there are a lot of positives to come away from the offense and the setter position. That included a .444 second set and a .237 mark if you don’t include their tough third. They had actually had better offensive numbers in a sweep loss to Northern Iowa, but there were some questions at the setter spot nonetheless.

The individual filling in at that setter spot was Madelyn Cole, a junior who starred at Marshall the last two seasons and transferred in. She notched 53 assists (10.6 per set) – solid numbers against Kentucky. It didn’t hurt – but also showed that she can keep the car running with great options – that Jaali Winters (25 kills, .305, 10 digs) and Taryn Kloth (17 kills, .182, 7 digs) went off. Then, against Northern Iowa she had just 25 assists as Megan Sharkey came on and logged 9.

It could be that Creighton was just drained after the five-setter in the morning, but that setter position will be one to keep an eye on with the BlueJays and will determine how consistent they can be at the top – as you say on day one.