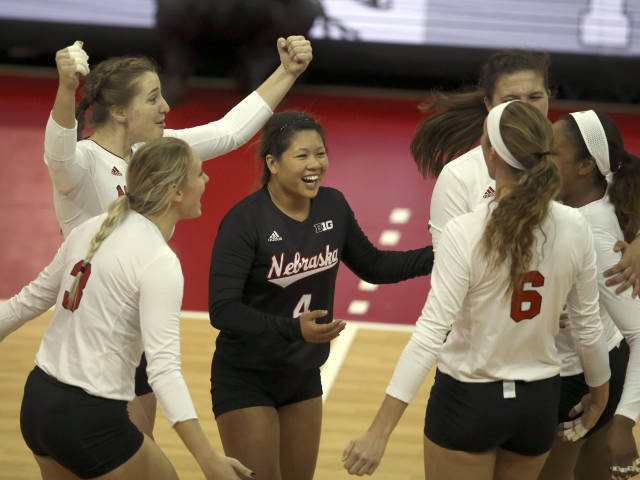 No. 1 Nebraska proved they are worthy of the number one ranking this weekend with a three set sweep over No. 4 Wisconsin and a five set battle against No. 3 Minnesota.

Minnesota rallied late in the first set to win, 26-24, but Nebraska pushed back to take sets two and three. The Golden Gophers made fought to tie the match at two all, winning the third set 25-22. Heading into the tie break set, the Huskers took the first five points of the set and never let down, taking the set and match 15-8.

Nebraska led in every category, including their season-high 76 kills for the match. The Huskers 17 blocks is a season-high for the team, compared to Minnesota’s 13.5 blocks. The Huskers hit for .267, while holding Minnesota to .159.

Mikaela Foecke led the Husker offense with 20 kills, Briana Holman added 17 kills and a .467 hitting percentage, while Amber Rolfzen hit for .519 with 16 kills.

Setter Kelly Hunter dished out a career-high 65 assists. Libero Justine Wong-Orantes picked up 35 digs, setting a school record that’s been in place since Maria Hedbeck picked up 34 on Sept. 4, 1993. Wong-Orantes is now within 34 digs of Kayla Banworth’s career record of 1,706 digs.

Dalianliz Roasado picked up a team-best 25 digs for the Gophers. Setter Samantha Seliger-Swenson recorded a double-double with 50 assists and 15 digs.

LINCOLN, Neb. – The Nebraska volleyball team proved worthy of its No. 1 ranking on Sunday, using a complete team effort to take down No. 3 Minnesota, 3-2, in front of 8,363 fans at the Bob Devaney Sports Center.

Minnesota staged a late rally to win the first set, 26-24, before Nebraska bounced back to take a 2-1 lead with a 25-18 win in set two and a 26-24 victory in set three. The Golden Gophers then held off a late Husker rally to take set four, 25-22, before Nebraska won the first five points of the fifth set and never looked back in a 15-8 win.

The Huskers had more kills than Minnesota in every set en route to a season-high 76 kills. Sophomore Mikaela Foecke (20 kills), junior Briana Holman (17) and senior Amber Rolfzen (16) all tallied season highs in kills for the Big Red. Leading the offense to a .267 attack percentage was junior setter Kelly Hunter, who finished with a career-high 65 assists, which is tied for fourth in school history in the rally scoring era.

Defensively, Nebraska stuffed the Golden Gophers 17 times for a new season high in blocks. Holman had a season-high 10 blocks to finish with her first double-double of the year. Senior libero Justine Wong-Orantes set a school record with 35 digs in the win, topping the previous record of 34 digs set by Maria Hedbeck against Penn State on Sept. 4, 1993. She is now within 34 digs of matching Kayla Banwarth’s career record of 1,706. Nebraska outdug Minnesota 77-72, as Kadie Rolfzen also reached double-figures with 10 to go with nine kills.

The impresive victory helped Nebraska move into a first-place tie in the Big Ten Conference standings with a 9-1 record in conference play. The Huskers improved to 18-1 overall with their eighth straight win over a top-10 opponent and sixth consecutive victory over a top-five team. The Huskers have now beaten the four teams who accounted for their four losses last season (Texas, Ohio State, Wisconsin and Minnesota).

Minnesota fell to 15-4 on the season and 7-3 in Big Ten play. Each of the Gophers’ four losses have come on the road to a top-15 opponent, and Minnesota’s three Big Ten losses have been five-set defeats at No. 14 Penn State, No. 14 Michigan State and No. 1 Nebraska. Sarah Wilhite led Minnesota with 20 kills as one of four Golden Gophers to finish with double-figure kills. Alexis Hart had 15 kills.

Set 1: Amber Rolfzen struck for a kill and block on back-to-back plays, and a Foecke kill forced an early Minnesota timeout with Nebraska ahead 8-5. Amber Rolfzen and Foecke smacked two more kills after the timeout to make it 10-5, completing a four-point run on Annika Albrecht’s serve. Foecke added another and Holman smashed two in a row to make it 14-7 Huskers. But Minnesota, trailing 18-13, put together a 5-0 run to even the set at 18-18 for the first time since the score was 3-3. Minnesota eventually took a 23-22 lead before a Foecke kill tied it. Wilhite gave Minnesota set point, but Holman and Kadie Rolfzen posted a block to square the set again, 24-24. A pair of Husker attack errors gave Minnesota set one, 26-24.

Set 2: The Huskers rallied from an early 3-1 deficit with a 14-5 run to go up 15-8. Foecke led the charge with four kills, while Holman had three kills and a pair of blocks. Minnesota pulled within 15-10, but Holman posted another kill that sparked a sideout battle until the Gophers cut it to 19-15. Nebraska won a long rally after a timeout with a tip kill by Foecke to make it 20-15. After Minnesota cut it to three, 20-17, Foecke terminated and Holman finished consecutive kills for a 23-17 lead. Andie Malloy gave the Big Red set point at 24-18, and the Huskers evened the match on an Amber Rolfzen kill for the 25-18 win. NU hit .409 in the second set after hitting .227 in set one.

Set 3: Nebraska broke an 8-8 tie with a 4-1 run to go up 12-9, with Holman contributing two kills. The Huskers held a 15-13 lead at the media timeout and led 17-14 before a Minnesota rally tied it at 17-17. Minnesota appeared to tie the set again at 18-18 but the Huskers won a review that ruled Minnesota went into the net during the rally, and the Huskers led 19-17. The Gophers did come back to take a 22-20 lead with four straight points, however. A kill by Holman ended the run, but Minnesota scored the next two points to make it 24-21. But the Huskers fought off three set points to spark a massive 5-0 run to win the set. Amber Rolfzen sparked the comeback with a kill and added a block with Hunter to even the set at 24-24. Kadie Rolfzen served an ace for set point, and Hunter and Amber Rolfzen combined for another block and the 26-24 win.

Set 4: Minnesota jumped out to a 6-2 lead in the must-win set. The Huskers sliced the deficit in half with an Amber Rolfzen kill and solo stuff. Foecke’s 18th kill, followed by a Hunter ace, cut the Gophers’ lead to 9-8, but the Gophers staved off the Huskers by scoring the next four points for a 13-8 lead, which began a 9-2 run that put the Gophers in front 18-10. Olivia Boender came off the bench and chipped in a kill, and Amber Rolfzen followed with a kill and solo stuff to get within 18-13. Trailing 21-14, the Huskers made a final push to get back in it. Holman and Foecke each tallied kills and set up for a block to pull NU within 22-19. But the Gophers gained set point at 24-20 on a Wilhite kill and won 25-22 to force a fifth set.

Set 5: Nebraska opened the decisive set with a 5-0 lead thanks to two kills by Kadie Rolfzen, a kill by Holman and block by Malloy and Holman. The Huskers went ahead 9-4 after an Amber Rolfzen kill and Minnesota hitting error. A back-row kill by Albrecht made it 11-5 and blew the roof of the Devaney Center before Minnesota committed another attack error to make it 12-5. Nebraska’s fourth block of the set gave the Huskers their first match point at 14-7 and two rallies later, Foecke closed out the win with her 20th kill.

Up Next: Nebraska hosts Illinois on Friday at 6 p.m. on BTN. It is part of another two-match home weekend, as the Huskers host Northwestern on Saturday at 7 p.m. on NET.

The Gophers return home next weekend, playing Rutgers on Friday night at 7 p.m., and facing Penn State on Saturday at 6:30 p.m.
Set Breakdown:

Set 2: Nebraska hit .409 to Minnesota’s .206 to win the second set and tie the match. Both teams remained tied in the beginning of the set until Nebraska took a 5-2 run to force a Minnesota timeout at 10-6. The Huskers continued the momentum with another 5-2 run, causing a second Minnesota timeout at 15-8. The Gophers slowly rallied back with a 7-4 run, decreasing Nebraska’s lead to four, forcing a Husker timeout at 19-15. Minnesota continued to shrink the lead, but Nebraska would take the set 25-18.

Set 3: Minnesota hit .098 to Nebraska’s .174 to fall in the third set, 26-24. Both teams were tied at eight until Nebraska took a 12-9 lead, and continued to hold the lead until Minnesota tied up the set at 17, forcing a Nebraska timeout. The Gophers took a timeout at 20-18, still trailing. Minnesota followed the timeout with a 3-0 run, forcing Nebraska to take a timeout at 21-20, Minnesota leading. But Nebraska shrunk the lead to one, forcing a Gopher timeout at its own set point. Following the timeout, Nebraska went on a 3-0 run to win the set 26-24.

Set 4: Minnesota held the lead throughout the set to win 25-22 and tie the match 2-2. The Gophers started out the set with a 3-0 run on Seliger-Swenson’s service rotation. Minnesota continued to hold the lead, forcing Nebraska to take a timeout at 6-2. Minnesota went on a 4-0 run again on Seliger-Swenson’s serve rotation, causing a second Husker timeout at 13-8. Minnesota would go on another 4-0 run, holding an eight-point lead, but after a 3-0 run by Nebraska, the Gophers took a timeout at 18-13. The Huskers fought back to go on a 6-2 run, shrinking Minnesota’s lead to three, causing a Gopher timeout at 22-19. But a kill from Wilhite put the Gophers at set point, and H Tapp ended the set with a kill.