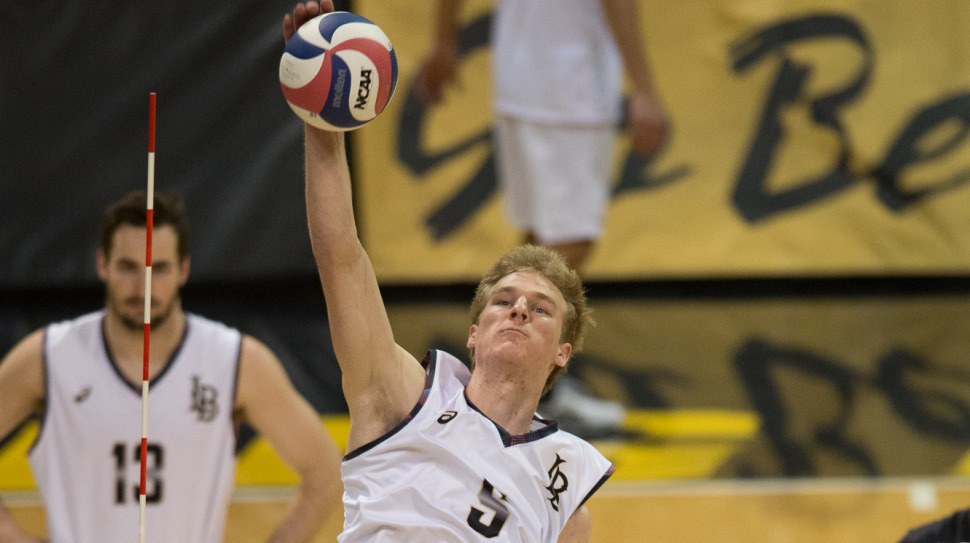 Northridge, California – In each team’s Big West opener, top-ranked Long Beach State took care of business with #16 Cal State Northridge in a three-set sweep. All three sets were close, but in the end the 49ers lack of mistakes pushed them to victory.

A majority of the team stats showed how close the two sides really were despite the sweep. LBSU posted just one more ace (4-3) on the same amount of serve errors and one more dig (30-29) while CSUN slightly won the block total (6.5 to six). The biggest difference was that on six more attacks, LBSU posted four less attack errors and seven more kills in a .340 to .242 advantage in efficiency.

Maybe the biggest proponent of the difference was the play at the setter position. While Sam Porter (36 assists) had a strong outing for CSUN, the ball placement from Josh Tuaniga (38 assists) continued to be top-notch.

That may not have been the biggest contributor to the difference though, as the 49ers showed their balance with the three-headed monster in Kyle Ensing (18 kills, .371, five digs), TJ DeFalco (10 kills, .364, seven digs) and Bjarne Huus (nine kills, .400). Flip that over to CSUN, who has the bonafide star in Arvis Greene (16 kills, .323, eight digs), but saw everyone else hit a collective .200 for the match. It also helped that Jordan Molina posted a match-best nine digs in the back row for the Beach in keeping a few extra balls off the court.

From here the location will move on to Long Beach, California as the 49ers play host in a rematch with CSUN visiting on Sunday at 10 p.m. Eastern Time.

The Beach (15-0, 1-0 Big West) hit .340 in the contest against the Matadors (8-6, 0-1 Big West) and were led offensively by junior Kyle Ensing’s 18-kill performance. TJ DeFalco also contributed as he added 10 kills to go along with seven digs and three service aces. Junior setter Josh Tuanigacontrolled the offensive effort with 38 assists.

Jordan Molina paced the back row with nine digs, while Nick Amado dominated the net with three solo blocks and three block assists.

The Beach opened the match with a 3-0 lead highlighted by back-to-back kills by Ensing and Bjarne Huus. Long Beach State never trailed as it utilized a balanced attack to push its lead to 15-10 on a kill by Ensing. Ensing was dominant as he recorded nine kills in the first set leading the Beach to a 25-22 victory.

Long Beach State hit .485 in the frame and knocked down 18 kills while committing just two attack errors. The Beach took their momentum into the second set as they hit .355 in the frame and pounded out 15 kills.

LBSU broke an early tie and jumped out to an 11-8 lead on a kill by DeFalco and eventually took a 16-12 advantage on a kill off the hands of Simon Anderson. However, CSUN chipped away at Long Beach State’s lead and eventually came back to even the score at 23-23. DeFalco gave the Beach back the lead with a kill and Ensing put the game away as he knocked down a kill giving LBSU a 2-0 edge heading into the intermission.

The Matadors came out of the break playing hard as they took a 3-1 lead to start the third set. But Long Beach State would not back down and the Beach battled back and used a 4-0 run to take a 5-4 advantage. The Beach took an 11-9 lead on a Matadors attack error as CSUN called a timeout to regroup. The Matadors came out of the break in action and evened the score, but Long Beach State put together another 4-0 run to go back up 15-11. With the match in their favor, the Beach never relinquished the lead as they went on to complete the sweep with a 25-20 set win.

Long Beach State and CSUN will meet each other once again on Sunday, March 4 at 7 p.m. inside the Walter Pyramid.

The win keeps Long Beach State unbeaten at 15-0 overall and 1-0 in the Big West while the loss drops the Matadors to 8-6 overall and 0-1 in conference.

Senior Arvis Greene matched the 49er hitters kill for kill throughout as he led CSUN with 16 kills, hitting .323 on 31 attacks. Greene also added eight digs, two blocks and one ace.

“Arvis hit .323 but I still think he could probably have hit .400, he had a couple of poor swings towards the end,” said Matador head coach Jeff Campbell. “But he’s getting better. His serving was better tonight, his defense was better and his blocking was better.

“Ultimately it doesn’t matter how well we do right now, what matters is that we’re getting better week to week and keep building towards the Big West Tournament in April.”

Sam Porter handed out 36 assists to go with one ace and Emmett Enriques had a team-high seven digs.

CSUN played from behind for much of the night, beginning in set one when the visitors took a 3-0 lead. After trailing by as many as six (10-4), the Matadors battled back to within two at 20-18 following a Greene kill.

A TJ DeFalco kill following a 49er timeout pushed the lead back to three and Long Beach still led by three at 24-21. Greene’s eighth kill of the set saved one set point but Kyle Ensing connected on the ensuing point to seal the 25-22 win.

After scoring on the first play of set two, CSUN would not lead again but did manage to knot the score at 23 late in the set. Ensing’s hitting error capped a late 3-0 Matador run that tied the score, but kills from DeFalco and Ensing gave the Beach at two set lead.

A block by Ptaszynski and Eric Chance gave CSUN its largest lead (4-1) early in the third set. CSUN still hung on to a 9-7 lead when the 49ers rallied for four straight points to force a Matador timeout at 11-9.

Trailing 17-13, CSUN mounted a pair of late rallies to get within one at 17-16 and again at 19-18. But following a 49er timeout, the visitors took advantage of an Ensing kill and a Ptaszynski hitting error to give them the margin they needed to take a 25-20 decision.

The same two teams close out the season series Sunday night at the Walter Pyramid. First serve is scheduled for 7 p.m.