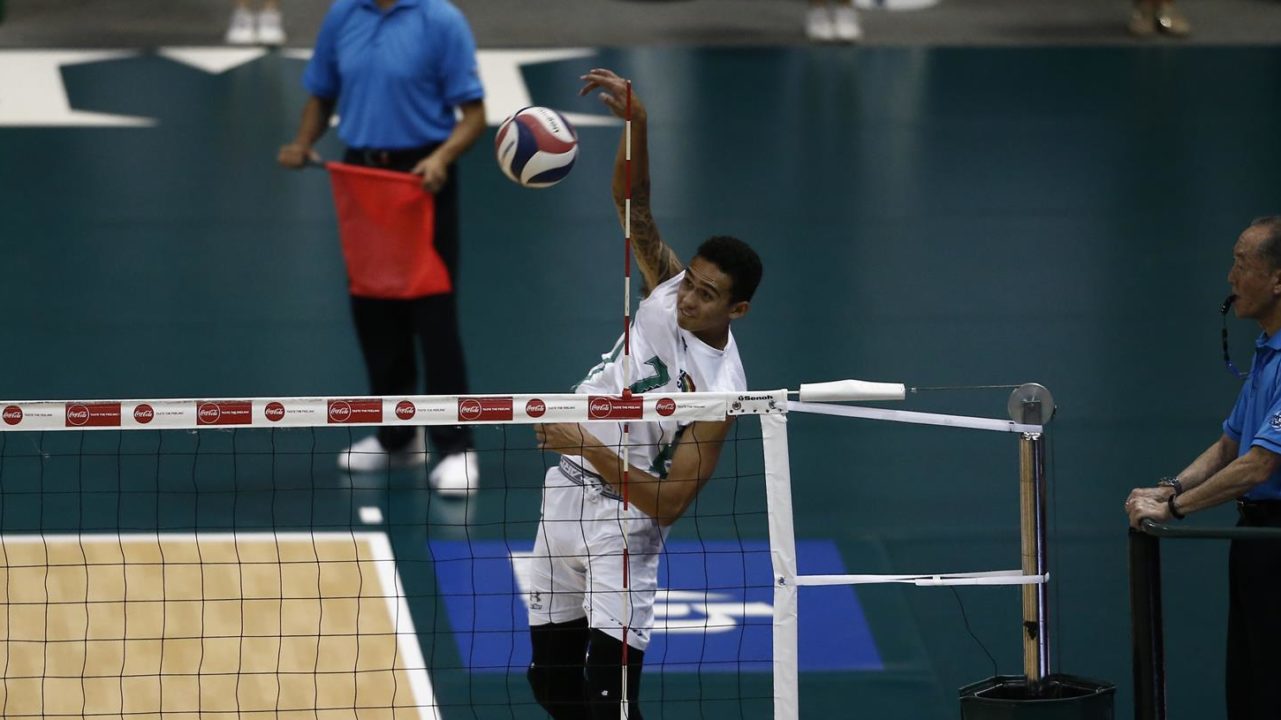 The top 10 teams held rank on Friday night with No. 1 Long Beach State, No. 2 Hawaii, No. 5 Loyola, No. 8 Lewis, No. 9 Ohio State and No. 10 UC Santa Barbara picking up wins.  Current Photo via Hawaii Athletics

Long Beach State moved to 15-0 and earned its first ever Big West victory, while Hawaii cruised to a non-conference sweep of No. 2 Concordia Irvine. UCSB moved to 2-0 in Big West play with a sweep of UC San Diego.

Key Stats: Hawaii dominated all facets of the game in the first of two weekend meetings with the Eagles. The Rainbow Warriors hit at a .443 clip and poured on 21 more kills (50-29) in the victory. Hawaii also registered a 6-0 lead in aces and 9-6 lead in blocks. UH hit .531 in the opening set and did not hit below .344 in a stanza on the night.

Stat Leaders: Sophomore outside Austin Matautia and sophomore opposite Rado Parapunov carried the offensive load for the Rainbow Warriors, notching 15 and 11 kills respectively, while each hitting .440 or better. For his part, Matautia also turned in a team-high 10 digs and three aces. Parapunov hit at a team-leading .556 clip and added six digs. Junior middle Dalton Solbrig posted six kills and a team-best four blocks, while junior setter Joe Worsley also put up four stuffs to go with 39 assists and three kills.

It Was Over When: Hawaii broke Set 3 open with an 12-2 run, vaulting ahead 17-7 after the early 5-all tie. Matautia notched two kills, two aces and a block in the rally, while Brett Rosenmeier turned in two kills and two blocks. Worsley even notched two kills and a stuff in the stretch. Concordia did not go quietly, however, scoring four straight and seven of the next nine to cut the margin to five at 19-14. Barsemian downed two kills and the Eagles capitalized on three Hawaii miscues. Later trailing 21-14, the Eagles rallied again, slicing the deficit to three at 22-19 with help from a kill and a block by Howell. In the end, two Rosenmeier putaways clinched Hawaii the set and the match at 25-21.

Stat Leaders: Junior opposite Kyle Ensing tallied 18 kills, while junior outside TJ DeFalco and senior outside Bjarne Huus added 10 and nine respectively to guide the Buckeyes to victory. DeFalco also added a team-best seven digs and three aces, while redshirt junior middle Nick Amado accounted for five kills on a team-high .714 clip to go with a team-leading six blocks.

Senior opposite Arvis Greene was the lone Matador to post double-digit kills, turning in 16 on a .323 hitting effort to go with a team-best eight digs. Junior outside Dimitar Kalchev added eight putaways, while senior middle Josiah Byers and freshman outside Maciej Ptaszynski chipped in five apiece. Byers hit at a team-best .556 clip (5-0-9) and put up a team-high three blocks.

It Was Over When: The Matadors scored four of the first five points in Set 3, including a kill and a block by Greene and a Kalchev ace, and later boasted a 9-7 lead. Long Beach State took advantage of three CSUN miscues to grab an 11-9 edge. After a tie at 11, the 49ers scored four straight, with a solo stuff by Amado and a Simon Anderson ace, to go up 15-11 and take a lead they would hold onto the rest of the way. Northridge cut the margin to one at 17-16 and 19-18, but could not break through. LBSU called timeout and outscored the Matadors 6-2 down the stretch to seal their 12th sweep of the year.

Key Stats: King registered its first set victory over a nationally ranked team in program history, taking Set 3 against No. 5 Loyola, but could not pull off the upset despite owning an 8-5 lead in blocks. The Ramblers boasted a 60-39 lead in kills, a 7-4 advantage in aces and outhit the Tornado .347 to .238 in the victory. Loyola hit nearly .400 in three sets, but struggled to just a .172 effort in a 25-21 Set 3 loss.

It Was Over When: Loyola raced out to a 9-3 lead in Set 4 as five different players notched kills, but King caught up to tie it at 11. Sprayberry notched two kills and Besson tallied two blocks in the rally. A 3-0 run, including a Piekarski kill gave the Ramblers a 14-11 edge and a lead, which they would not relinquish. After trading points, King scored back-to-back points on a Nick Drooker kill and a hitting error, to cut the margin to one at 18-17. Loyola responded with back-to-back putaways by Jamison. The teams split the next eight points, before a Mahan kill wrapped up the 25-21 win.

It Was Over When: After a tie at 6-all, Set 3 was nearly all Lewis, beginning with a  4-0 run, including three straight Railsplitter miscues. Lincoln called timeout and scored two out of the break, but could not stop the Flyer onslaught that followed. Lewis scored nine in a row, including three blocks and two kills by Instenes, and two putaways and two stuffs by Vander Zanden. A service error slowed the Flyers momentarily, but Lewis scored six of the final seven points to cap the sweep. Three Lincoln miscues plus a kill and an ace by Kershcner sewed up the 25-10 victory.

Key Stats: After dropping a close first set, Ohio State never trailed, winning three straight to grab the MIVA road win over McKendree. Ohio State hit .250 or better in all four sets, including a .652 effort with just one error in Set 4, en route to a .405 percentage for the night. The Buckeyes also led 64-37 in kills, 9-3 in aces and 7-2 in blocks.

Stat Leaders: Senior outside Maxime Hervoir dropped 20 kills and redshirt freshman opposite Jake Hanes chalked up 18 to lead OSU. Hervoir rounded out a double-double with 10 digs and three blocks, while hitting .548. Hanes pulled up a match-high 13 digs and notched three aces and three blocks. Senior outside Nicolas Szerszen chipped in 11 kills and nine digs. Redshirt junior middle Blake Leeson hit at a team-best .571 clip and put up a team-high three blocks.

Senior outside Jared Wilcox downed 11 kills and put up a team-high two blocks to top the McKendree scorers. Senior outside Nolan Rueter added eight kills and 11 digs, while redshirt senior middle Brendan Schmidt and freshman outside Patrick Ross chipped in seven putdowns apiece. Schmidt hit at a .385 clip and was one of three Bearcats with an ace.

It Was Over When: A 6-0 run put Ohio State on top 9-3 in Set 4. A kill and a block by Nick Laffin and an ace by Hervoir helped the Buckeyes to the advantage. Two Hanes kills pushed the edge to eight at 14-6 forcing McKendree to use its final timeout. A 7-1 run including two Hervoir aces and one by Martin Lallemand made it 23-10 Buckeyes. The Bearcats scored two in a row, but couldn’t stop final putaways by Hanes and Leeson, which clinched the 25-12 win and the match.

Senior opposite Tanner Syftestad racked up 16 kills on a .433 hitting effort, while junior outside Nathan Thalken followed with seven putaways on a .583 clip (7-0-12). Senior middle Alec Flowers put up three blocks, while sophomore setter Connor Walbrecht served up the team’s lone ace.

It Was Over When: UC Santa Barbara jumped out to a 9-4 lead in Set 3 and led by at least two points the rest of the night. Three Sanders kills and two by Drake gave the Gauchos the early edge. The Tritons scored three straight including kills by Thalken and Luke Lamont to made it 9-7, but could get no closer. Trailing by five at 18-13, UCSD made another run with four of the next five, capped by a Walbrecht ace to cut the margin to 19-17. The teams split the next six points, before UC Santa Barbara wrapped up the night with a 3-0 run. Chavers downed two kills and DeWeese served up an ace in the final stretch.