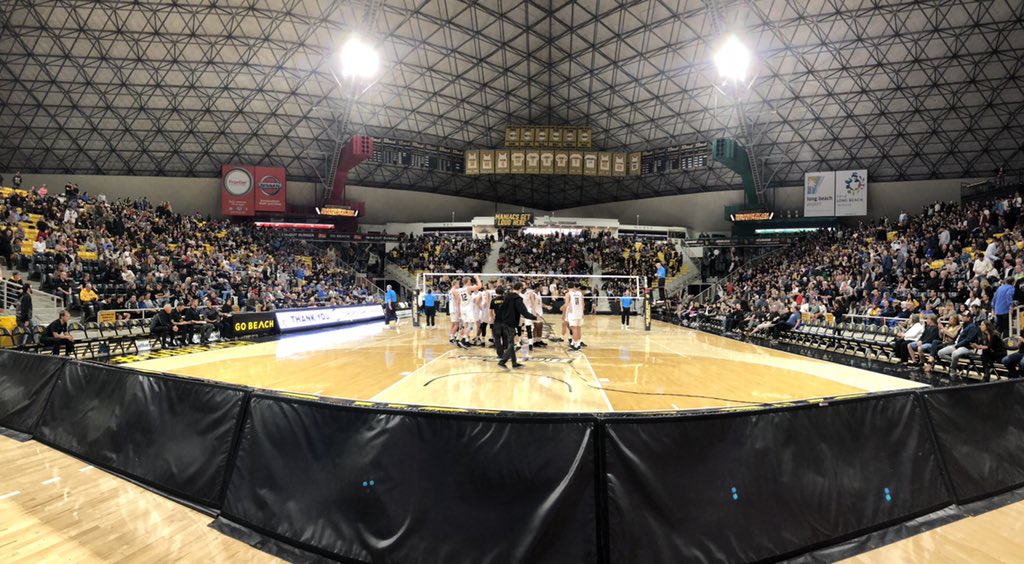 Long Beach, California – Long Beach State gave its crowd of 4,560 strong – a new program best – quite the treat late into the night as the top ranked 49ers downed #2 UCLA in four sets.

The match more than represented a battle of number one versus number two, but also provided a wealth of stars on the court at the same time. Maybe no one represented that more than the two setters, Josh Tuaniga (Long Beach State) and Micah Ma’a (UCLA).

Both setters proved to be strong in the individual battle, but it was Tuaniga’s bunch that won the war. The Bruins were plagued by errors – both in attacks and on serves. In total, UCLA notched 24 attack errors and 25 serve errors compared to 10 and 14 respectively for the Beach. The high serve error totals aren’t new for UCLA – although 24 is. Still, they had been able to overcome it by keeping the opposition out of system and with other play. Against the number one team though, that didn’t fly.

The opening set was a doozy, featuring 12 ties and four lead changes. Finally, UCLA emerged from a 19-19 tie with a 21-19 lead that was extended to 24-21. Two straight for the 49ers tightened things, but they couldn’t complete the comeback as Christian Hessenauer (11 kills, seven digs) notched his sixth kill in the first with Micah Ma’a (39 assists, nine digs, four kills) dishing out one of his 12 assists (to go with six digs) in the opener.

The early performances of Kyle Ensing (16 kills, .324, nine digs) and TJ DeFalco (17 kills, .419, 12 digs, five blocks) – who each had four first set kills – weren’t enough to take the 1-0 lead, but their continued play in set two was key as they combined for eight kills once again. The defense was also a story, as LBSU held UCLA to a -.032 hitting percentage for the set. Part of that was in the Beach slowing down Hessenauer, who had just five kills in the final three sets combined and hit .179. Things were actually tied at 9-9, but the 49ers hit a 7-1 run that ballooned into a 16-6 finish to tie the match 1-1.

The 49ers’ success continued into the third, as they followed a .409 second with a .500 set. UCLA found some more success on offense than the second, but it still wasn’t near the efficiency that LBSU hit at with Josh Tuaniga (39 assists, eight digs, two aces) facilitating the way. After a 10-10 tie, Long Beach State pushed to a 21-18 edge and sprinted to the finish line from there with four of the final five.

It appeared that the Bruins were regaining their form in the fourth as they pulled in front 18-15 in a do-or-die set. That’s when that theme of UCLA errors struck again, as Long Beach State went on an 8-0 swing featuring four UCLA attack errors (two by block) and one UCLA serve error. Tuaniga served during the stretch, even recording an ace. It was only fitting at 24-21 the Bruins had yet another serve error to end the match.

In case each team didn’t get enough of each other, they actually represent both team’s next match as well. The two will meet in Pauley Pavillion this next go around though on Wednesday February 21 at 10:30 p.m. ET.