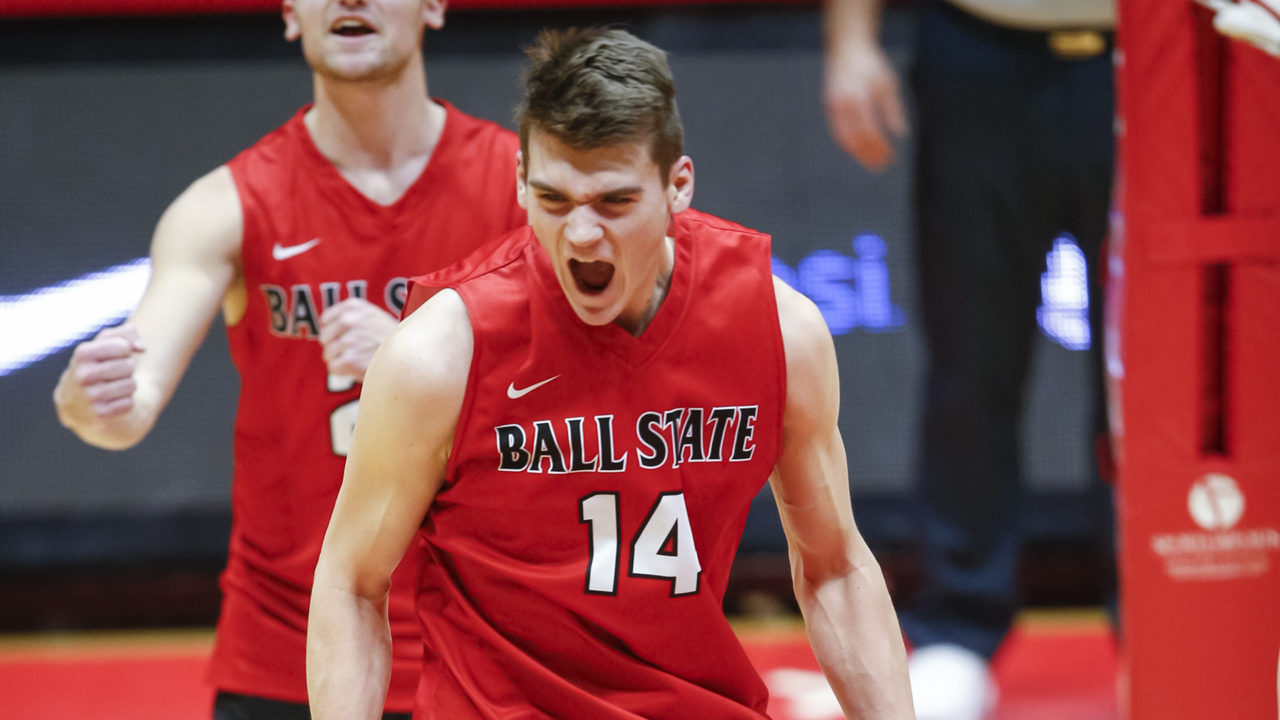 Ball State continued its role as giant killer on its first homestand in nearly a month, following Friday's upset of No. 8 Lewis with a four-set win over No. 5 Loyola. No. 19 Stanford pulled off a road upset, besting No. 10 Grand Canyon in four sets.  Current Photo via Ball State Athletics

Ball State continued its role as giant killer on its first homestand in nearly a month, following Friday’s upset of No. 8 Lewis with a four-set win over No. 5 Loyola. No. 19 Stanford pulled off a road upset, besting No. 10 Grand Canyon in four sets.

Lewis rebounded from Friday by topping No. 13 Fort Wayne, while No. 9 Penn State, No. 15 Saint Francis and No. 17 UC San Diego also held rank for victories.

Junior outside Collin Mahan (17), senior opposite Ricky Gevis (13) and junior outside Will Tischler (12) turned in double-digit kill tallies for Loyola, but it was not enough. Mahan hit at a team-best .433 clip while downing double-digit kills for the 14th straight match, while Gevis put up a team-high four blocks alongside senior middle Jeff Jendryk and junior middle Paul Narup. Jendryk also added seven kills and Narup chipped in five. Freshman setter Garrett Zolg notched a 45-assist, 12-dig double-double.

It Was Over When: Loyola turned a 4-2 deficit into an 8-6 lead with three BSU errors and a solo stuff by Gevis. The Ramblers upped the advantage to four at 13-9 with a Jendryk ace and kills by Mahan and Narup. Trailing 15-11, Ball State mounted its comeback, scoring 12 of the next 16 points. Three blocks and two aces and kills by four different players put the Cardinals on top 23-19. Kills by Gevis and Mahan sliced the margin to two at 23-21. After a timeout to regroup, Ball State got a block by Parker Swartz and Szews and a hitting error from Loyola to finish off the upset.

Key Stats: Stanford served up eight aces and hit at a season-best .489 clip to snapped a three-match losing skid and earned its first MPSF win of the season in four sets over #10 Grand Canyon. The Cardinal hit .385 or better in all four sets, including an eye-popping .722 clip in an errorless Set 2 win. GCU hit .277 on the night, hitting over .300 in all but Set 3, which saw the Lopes hit -.056. Stanford edged GCU 53-50 in kills, 8-0 in aces and 9-6 in blocks to hand Grand Canyon its third straight MPSF loss.

Senior outside Shalev Saada posted 16 kills to lead GCU, while senior outside Cody Williams added nine on a .583 hitting effort. Redshirt senior middle Ashton King grabbed the school’s career record in blocks with three in the match, bringing his all-time tally to 370, while also adding seven kills. Of note in the match was the debut of 6-7 freshman outside hitter Trevor Weary, who played in the final two sets, notching five kills and two blocks on a .625 hitting effort.

It Was Over When: Stanford snapped a 4-all tie in Set 4 with an 8-3 run, including a pair of blocks and an ace by Rakestraw and two Jasper kills. The Lopes cut the margin to three four times, but fell behind 19-14 after a Beaty ace and Presho putaway. Grand Canyon scored four of the next five with two Weary kills and one each from Williams and David Kisiel to pull within two at 19-17. Stanford called timeout and rallied with six of the final eight to secure the 25-19 win. Two Rakestraw kills and two GCU errors set up the final point, which came on a stuff by Beatty and Presho.

We have a new blocks KING! Ashton King and his 370 total blocks now sit atop GCU's record books ? #LopesRising? pic.twitter.com/Nm76kPLVmo

Key Stats: Five of the six Lewis hitters with a kill to their credit hit at a .308 or better clip, including four at .500 better, in a road sweep of Fort Wayne on Saturday. The individual efforts lifted the Flyers to a combined team hitting percentage of .429, with just eight hitting errors in the match. Lewis bested the Mastodons 41-34 in kills, 2-1 in aces and 5.5 to 3 in blocks, while holding Fort Wayne to a .165 hitting effort.

Stat Leaders: Redshirt sophomore outside Ryan Coenen led the Lewis offense with 12 kills, marking his sixth double-digit effort of the season, while sophomore outside Kyle Bugee and redshirt freshman middle Tyler Mitchem added nine and eight respectively. Bugee hit at a .615 clip with just one error, while posting a team-high nine digs and two aces. Mitchem notched a .500 effort and put up a team-leading four blocks.

It Was Over When: It was a two-point game midway through Set 3, when Lewis pulled away with an 8-1 run to turn a slim 15-13 margin into a dominating 23-14 advantage. Five Fort Wayne miscues and two Coenen kills guided the effort. A Murray kill gave the Flyers a match-point try at 24-15, but a Vargas putaway held things off momentarily. Coenen issued the final putaway to clinch the sweep.

It Was Over When: After trailing 7-6 in the final stanza, Penn State broke off a 9-1 run, including three Penrose kills and three Harvard errors, to take a 15-8 lead. The Crimson would get no closer than five the rest of the way. The Nittany Lions led by as many as eight at 23-15after a solo stuff by Penrose, but Harvard scored three straight, including a block and kill by Johnsson to extend the set. In the end, an Albrecht kill and Harvard hitting error capped the 25-18 win and the match.

Freshman outside Shawn Tischler turned in 11 kills for Sacred Heart, while redshirt junior right side Emerson Waumans (9), sophomore middle Rob Chatterton (7) and freshman outside Jakob Karlsson (6) were right behind. Junior middle Michael McLaughlin put up a career-high seven blocks and added four kills on a .500 hitting effort, but it was not enough for the Pioneers. Waumans notched five blocks, while Tischler and Karlsson put up four apiece.

It Was Over When: Saint Francis worked its way to a 12-7 lead in Set 4 as Braswell downed five kills and a block. Sacred Heart responded with eight of the next 10 points to grab a 15-14 advantage. Five Red Flash errors and two Tischler kills aided the Pioneers in the rally. After ties at 15 and 16, Saint Francis seized control with a 6-1 run, including kills by three different players. Sacred Heart was within three at 22-19 after two miscues, but the Red Flash used a Buck kill, a Roman Szwabinsky ace and a stuff by Herc and Braswell to wrap up the win.

It Was Over When: UCSD led 12-8 midway through Set 4 with help from six Lion errors and two kills each by Harrison and Jimenez. The teams split the next eight points, before a pair miscues made it 18-13 Tritons. Lindenwood was back within one at 18-17 after two UCSD errors and kills from Jennings and Michael Chard. The lead teetered between one and two the rest of the way. A service error made it 24-22 Tritons, but own of its own kept the set going. Syftestad put the final nail in the night.