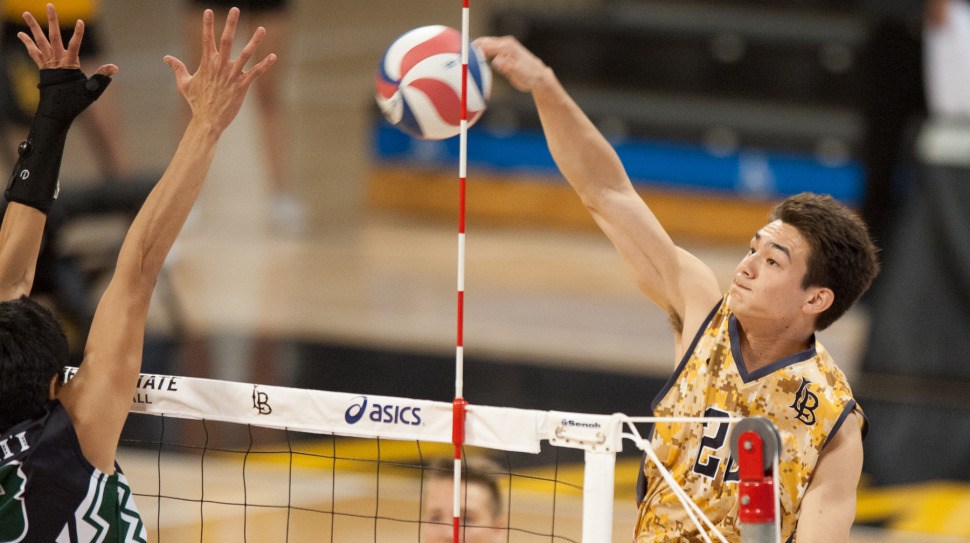 About The Beach
• The Beach have claimed the No. 1 spot in the AVCA National Rankings after extending their winning streak to 12 straight matches and improving to 10-0 at home.
• Senior libero Andrew Sato continues his prowess in the backrow as he tallied 16 digs last week to bring is career total to 909 becoming just the 15th player in MPSF history to reach the 900 dig plateau.
• Senior middle blocker Bryce Yould has been hot offensively as he leads the Beach with a .514 attack percentage all the while upping his career hitting percentage to .444 to take over third place all-time at Long Beach State.
• Sophomore setter Josh Tuaniga has totaled 779 assists for an average of 11.46 to lead both the MPSF and the nation. As a team, the Beach are averaging 12.79 assists per set which is also tops in the country and conference.
• Joining Tuaniga as No. 1 in the nation is senior middle blocker Amir Lugo-Rodriguez who averages 1.30 blocks per game to set the tone for the rest of the country.
• The Beach’s offense is hitting .380 which is good for first in the country. Long Beach State boasts three players who are hitting over .400 in Bryce Yould (.514), Josh Tuaniga (.506), and Amire Lugo-Rodriguez (.489).
• LBSU has three players leading the MPSF in statistical categories. Josh Tuaniga (11.46 assists per set) leads the nation, while Amir Lugo-Rodriguez (1.30 blocks per set) and Andrew Sato (2.62 digs per set) lead the league.
• Long Beach State was chosen to finish third in the MPSF Preseason Coaches’ Poll with 103 total points. The Beach were picked to come in behind BYU (119 points), which garnered nine first-place votes, and UCLA (111 points), which tallied three first place votes.

In the Rankings
Long Beach State’s 12-match winning streak, coupled with Ohio State’s 3-0 loss against UC Irvine last week, helped propel the Beach in first in the AVCA Division I-II Men’s Volleyball Poll. With a 13-1 MPSF record, the Beach are tops in the league and have officially punched their postseason ticket into the eight-team MPSF Tournament and have clinched home court for the MPSF Quarterfinals on April 15.

CSUN brings a No. 14 ranking into the week after dropping their last five contests. The Matadors are looking to snap their five-match losing skid and move up in the national polls.

Sacred Heart is not ranked. The Pioneers have a 7-17 overall mark and are 5-9 in the EIVA.

Scouting The Matadors
No. 14 CSUN is looking to snap a five-match losing streak as it brings a 12-11 record into the match against top-ranked Long Beach State. The Matadors’ last win came on March 1 when they defeated UC San Diego in four sets at the Matadome.

As a team, the Matadors are hitting .331, while averaging 12.3 kills per set on 11.5 assists per contest. Meanwhile, their opponents average 11.4 kills per set to go along with a .266 attack percentage.

Series vs. CSUN
Long Beach State and CSUN will meet for the 77th time in program history and the Beach own a 43-33 record in the all-time series. Last season, the two teams split the series with LBSU winning 3-0 in the Pyramid and CSUN edging out the Beach in five sets in the Matadome. When facing off in Northridge, the two teams are deadlocked 15-15.

Christopher DeLucie leads the team with 3.67 kills per set, while adding a .320 attack percentage. Joshua Ayzenberg paces the backrow with 3.49 digs per set, while Taylor Bloomquist guards the net with a team-best 1.13 blocks per set.

Series vs. Sacred Heart
Long Beach State and Sacred Heart will meet for just the second time in program history. Last year was the first time the two teams met and LBSU came out with a 3-0 win at the Santa Barbara Tournament. The contest on Saturday will mark the first meeting that is not being played on a neutral site.