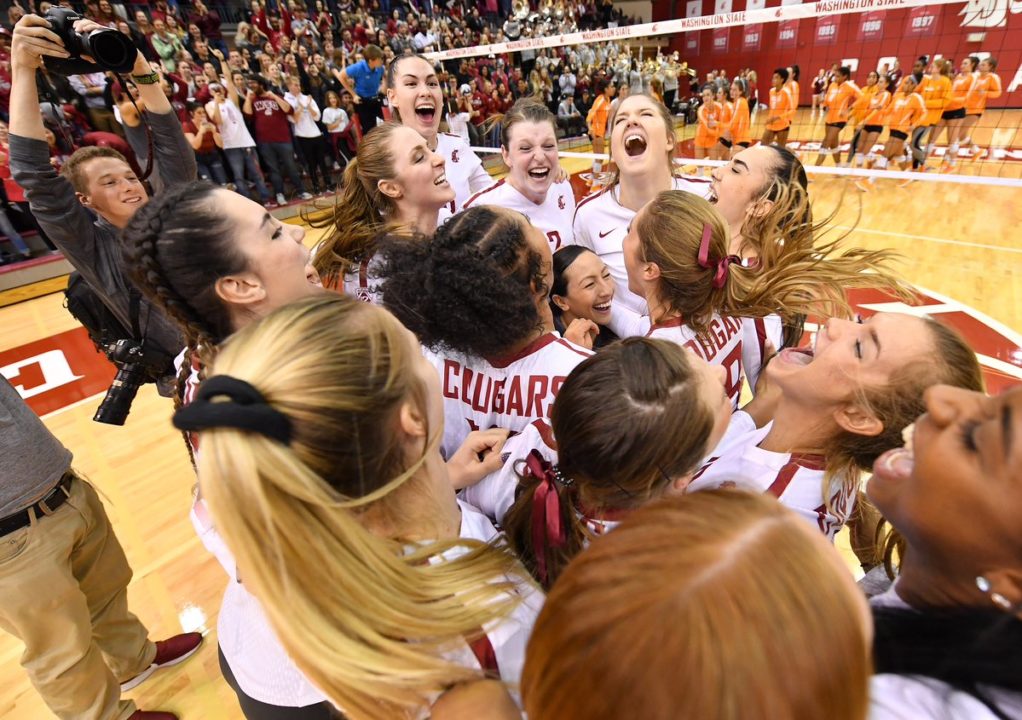 The No. 16 seeded Washington State Cougars (23-9) defeated the Volunteers of Tennessee (26-6) Saturday evening to advance to the NCAA Tournament Sweet Sixteen for the first time since 2002.  Current Photo via Washington State Athletics

PULLMAN, Wash. – The No. 16 seeded Washington State Cougars (23-9) defeated the Volunteers of Tennessee (26-6) Saturday evening to advance to the NCAA Tournament Sweet Sixteen for the first time since 2002.

The Volunteers of Tennessee saw early control of this matchup after a quick 3-0 scoring run over the Cougars put them out in front at 10-7. Washington State came fully prepared, and this opening set turned into a battle after a 6-0 run gave WSU a 14-11 advantage courtesy of back-to-back aces from Taylor Mims, and kills from Jocelyn Urias, and McKenna Woodford. The Vols countered with a 6-0 scoring run of their own to regain the lead at 21-18. The Cougars continued to fight, generating a pair of 3-0 scoring runs after crucial kills from both Woodford, and Urias, and ultimately capped off set one with an Ella Lajos, and Claire Martin block for the 30-28 win.

Washington State continued to ride the opening set momentum with a 5-1 run after an Alexis Dirige ace, and a Martin kill to surge ahead of the Volunteers. The Cougars kept the pressure on Tennessee with scoring runs of 3-0, and 4-0 with multiple kills from Mims, and an additional from Woodford to put the home lead out to 18-9 overall. WSU sealed the second set off with an Ashley Brown kill, and winning the set after a service error from the Vols. Roles were reversed in the third set of play in this match, as Tennessee took control of the game with a pair of scoring runs at 3-0, and a 5-0 run as well that put the Vols up 20-10 over Washington State. The Cougars did cut down the opposing lead a bit with a 7-1 run featuring multiple blocks from Urias, and a Penny Tusa ace. UT would end up claiming the set over WSU however, scoring back-to-back points for the 25-19 set victory.

The Cougars and the Volunteers were locked in an intense battle early on in set number four, until Washington State began to find its’ rhythm, totaling six straight points to jump out to a 16-9 advantage. The offensive attack was clicking in this final set as kills from Mims, Woodford, Brown, and Urias continued to fuel WSU ahead to a late 20-12 lead. WSU finished Tennessee off with a 4-0 run from kills by Woodford, and Mims, along with a service ace from Taylor, and a block from Brown and Urias to win it 25-13 and advance.

STAT OF THE MATCH
Tonight’s state of the match features the last time the Cougars advanced to the Sweet Sixteen in 2002, when Washington State defeated Kansas State in Manhattan, Kansas to continue on in the NCAA Championship Tournament.

📸 Quick snapshot from all the excitement tonight 😁#GoCougs #RiseAgain pic.twitter.com/m8f31L3Sgu

PULLMAN, Wash. – No. 19 University of Tennessee fell in the second round of the NCAA Tournament to Washington State in four sets.

The Lady Vols (26-6, 16-2 Southeastern Conference) season ends after making their first NCAA Tournament appearance since 2012 and their first appearance in the second round since the 2011 campaign.

In the loss, junior Tessa Grubbs finished with 21 kills while hitting .306 for the match. In her final match as a Lady Vol, senior Erica Treiber finished with 13 kills (.435 hitting percentage) to go along with a team-high five blocks

After dropping the first two sets of the match, Tennessee rallied back to take the third set, leading nearly the entire way. Up 8-6, the Lady Vols went on a 7-1 run to increase their lead out to eight points. Tennessee was able to force Washington State (22-10, 12-8 PAC-12) to hit negative in the set with nine hitting errors.

The Lady Vols had five blocks in the frame including four from freshman Raquel Perinar who came in along the front row to start the frame.

In the opening frame, Grubbs helped pace the Lady Vol offense with seven kills. Tennessee dropped a close opening set in extra points 30-28. Defensively, the team was able to limit the effectiveness of Cougar senior Taylor Mims who lead the team in kills/set.

The Lady Vols held her to a negative hitting percentage and just four kills at the midway point of the second set. Grubbs added seven more kills to her name in the second set as the junior hit the ball at a .321 clip through two sets.

Washington State took the second set to take a 2-0 advantage heading into the break.

From Coach Adams:
On the match and season:
“I’m proud of our team. Throughout the year, this team has found a way to win to get us to this point. Washington State played great. They were able to get in a lot of one-on-one situations and execute.” – Coach Adams

On final timeout in the four set:
“I told them that we were just going to keep fighting. We were going to keep playing our game no matter what the score is we are going to play our brand and style of volleyball.” – Coach Adams

From Erica Treiber and Tessa Grubbs:
On what worked in the third set:
“We were playing a lot cleaner and really playing true Tennessee volleyball compared to what we did in the other sets. Our mentality was great going into the third set because we knew we had the grit and we were trying to give it all we had.” – Erica Treiber

On feelings in her final match:
“There were lots of emotions. It stinks to lose this way but, we have a lot to be proud of over our four years. I’m excited to see where Tennessee volleyball goes next year and into the future because they are going to runs. They have so much to be proud of.” –Erica Treiber

On mindset after the second set:
“What we were thinking was that we have been in this situation before and we have done this before. We have the grit to do it and it was just a matter of execution is what it really came down to.” – Tessa Grubbs

On what was learned in the tournament for next season:
“This whole process has been a learning experience for us. Not a single person on this roster has been to the NCAA Tournament so, making it here was huge for us. Everything was a learning experience to us from the trip, to playing, to the level that you have to maintain to beat teams at this point of the season. What we have learned both yesterday and today is going to have to convert next year. We are going to come back with a vengeance.” – Tessa Grubbs