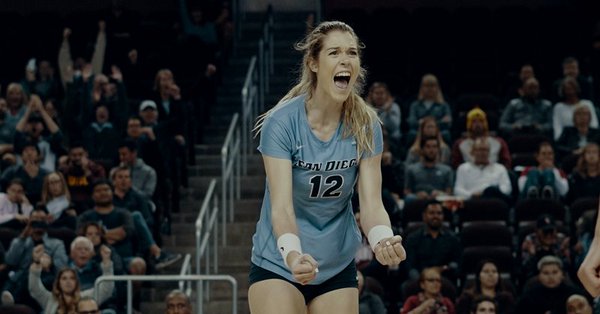 San Diego took down No. 17 USC in straight sets, 3-0, on Saturday evening at the Galen Center in the second round of the NCAA Tournament to advance to the NCAA Regional Semifinals for the first time since 2013. Current Photo via San Diego Athletics

LOS ANGELES— San Diego took down No. 17 USC in straight sets, 3-0, on Saturday evening at the Galen Center in the second round of the NCAA Tournament.

Katie Lukes led the Toreros with 12 kills and a .348 hitting percentage, while Roxie Wiblin chipped in eight kills and Hannah Patrick added seven. Addie Picha dominated at the net, registering seven blocks and Lauren Fuller and Kelli Barry anchored the back row with 12 digs and 10 digs respectively.

The Trojans (22-11) came out aggressive from the service line to start the match, putting USD out of system and giving USC a comfortable eight-point lead, 17-9, in set one.

With the Trojans leading 18-11, the Toreros put together a 6-1 run behind two kills from Lukes and two from Picha. The Toreros pulled even at 22-22 but an attack error and a block gave USC set point. After a San Diego timeout, the Toreros fought off two set points and battled all the way back to take the first set, 27-25.

The Toreros then picked up right where they left off, storming out to a 9-3 lead to start the second set. The Trojans pulled even at 11-11 before USD stepped on the gas, hitting .300 in the set and cruising to a 25-21 victory and a two-set lead.

USC jumped in front quickly out of the intermission, leading the third set 7-3, before San Diego began to find its rhythm again. The Toreros went on a 7-1 run to pull ahead 10-8. The Trojans called a timeout but it did little to slow San Diego’s momentum. USD never relinquished the lead again and won the third set 25-19 to secure the sweep over the tournament’s No. 11 seed.

With the win, the Toreros advance to the Illinois regional semifinal where they will face the 6-seeded Wisconsin Badgers next Friday.

For the Toreros, Katie Lukes collected 12 kills (4e, 23att) and hit .348. Lauren Fuller had six kills and led USD with 12 digs. Anna Newsome had 25 assists and four digs to go with a service ace and a block.

The Trojans allowed an eight-point lead (17-9) to slip away in the first set. Despite having set point at 24-22, USC couldn’t hold off the Toreros who came all the way back to claim a 27-25 win in the opening frame.

San Diego created a sizeable early lead in set two but were caught at 11-all by the Trojans. USC stepped in front for a lead momentarily before USD seized control and wrapped up a .300 hitting set with a 25-21 win.

USC raced out to a 7-3 lead to open the third, but San Diego used a 7-1 run to claim a 10-8 lead and forced the first USC timeout. The Trojans closed to within a point at 13-12, but Toreros were never threatened again after that as USD built several six-point leads before sealing a six-point win, 25-19, for the sweep.

USC fell to San Diego for just the second time in 14 meetings. The other loss came in 2013 at Jenny Craig Pavilion when the Toreros upended a No. 1-ranked Trojan squad. USC falls to 12-2 all-time against USD.

The Trojans fell to 80-33 all-time in the NCAA tournament and to 126-40 in all postseason matches.

The Women of Troy faced San Diego in the second round of the NCAA tournament for the second consecutive season and for the fourth time since 2010 (2010, ’15, ’17, ’18). USC fell to 7-1 all-time against the Toreros in NCAA matches.

How is this an ‘upset’? USC lost all year, why would that change just because the tournament started? You can’t continue to pust the PAC12 on your readers, but at the end of the first week end how many are left? v B1G? smh #StillSurprisedUCLAdidntMakeIT With the exception of Stanford, the PAC12 was very mediocre in 2018, yet you guy keep acting like it was 1999. ..wasn’t won won’t be again. Sorry.

USC fired one of the best coaches in the country because of his age in the opinion of many then they hired a loser from the WCC and he still can’t beat a WCC team. San Diego looked really good congrats to them.