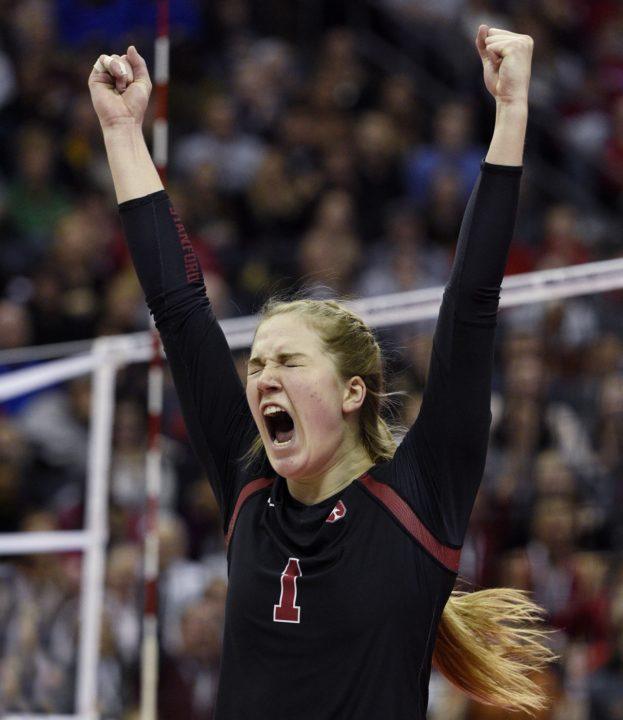 #1 Stanford gets their first big test in defending their title as #5 Penn State looks to make a statement. Archive Photo via Randy Miyazaki

Forget being in week two, we now kick-off month two with a top-five matchup between two powers in Stanford and Penn State. Beyond that, several other ranked or receiving vote teams play in match-ups that should influence next week’s top 25.

Two of the last three National Champions square off as both teams get their first big test of the season. They will actually play a second time in the non-conference with this serving as the first meeting.

Stanford actually swept Penn State in a meeting last year and will look to build off their 3-0 start and cement their spot at the top of the VolleyMob top 25 for next week. One key for the Cardinal will be the health of senior All-American Merete Lutz who missed all of last week with an undisclosed injury.

Penn State on the other hand could start a trend of the top-team losing after Texas fell last week. It would also prove that they really are ready to make that jump back to heavyweight after two straight seasons of Sweet 16 losses.

Northern Iowa already racked up one top 25 win last week when they took down then-ranked Missouri. The 2016 NCAA Tournament team from the MVC looks to tack on another as they face an upstart USC team who will look to cement their status as a top 20 team after defeating Michigan and going undefeated in week one.

Ohio State and Missouri State duel in a 2016 NCAA Tournament first round rematch that has implications on the edge of the top 25. The projected MVC champions are off to a strong start at 2-1 with their lone loss coming to #9 Kansas. Ohio State is also 2-1 with their only loss to #13 BYU.

Coming off an Elite Eight run in 2016, some questioned whether the BlueJays had it in them to reach new heights with a host of returners in 2017. They made a strong impression early by defeating then #3 Washington in Seattle, and now look to score another top 15 win against an experienced and talented Kentucky squad who has a top 25 win over over a Pac-12 school as well (Utah).