For the second straight night, top-seeded Stanford women’s volleyball swept its way to victory in the NCAA Tournament, this time advancing to the Sweet 16 with a 25-20, 25-15, 25-17 victory over Loyola Marymount 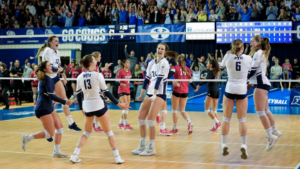 For the sixth-straight season, the Wisconsin volleyball team has advanced to NCAA Regional play, downing Pepperdine 25-16, 25-12, 15-25, 25-13 in the second round of the NCAA tournament on Friday night in the UW Field House.

After spending the bulk of the 2018 season ranked No. 1 in the country, BYU volleyball swept the West Coast Conference major individual honors and placed five student-athletes on the All-WCC first team.

The West Coast Conference has named its Volleyball Player of the Week for November 21, 2018, Pepperdine’s Shannon Scully.