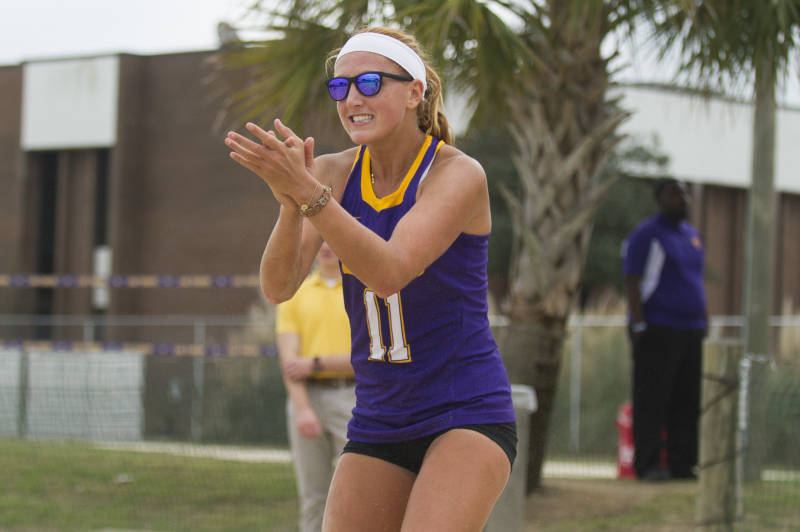 BATON ROUGE, La. – Tulane’s No. 16 beach volleyball squad took on a pair of CCSA opponents as well as the University of North Florida in day one of the Tiger Beach Challenge in Baton Rouge, but the Green Wave (9-3, 1-3 CCSA) were unable to close in on No. 8 South Carolina and No. 10 LSU as they finished with a 1-2 record on Saturday afternoon. Despite the losses, Tulane got back into the win column to close out the day with a 4-1 victory over North Florida.

The Green Wave had a rough start to the morning, dropping their first dual of the weekend to host No. 10 LSU on a score of five matches to none.

Tulane’s fifth flight, made up of duo Anna Chin and Sarah Strasner, took the first set from the Tigers 21-14 but fell in a close 17-21 decision in the second. The pair couldn’t hold off Callan Molle and Cati Leak in the deciding set, falling 15-17 as the Tigers took an early 1-0 lead.

Court four would also go to three sets but once again, the decision did not fall in Tulane’s favor, with Tarin Mergener and Annie Shurtz going 20-22, 21-12 and 15-11 to give LSU a 2-0 advantage.

Tulane had the chance to get back in the dual on court three, but Briana Correa and Hannah Holmes could not hold off the Tigers as the pair fell in close 18-21, 19-21 sets.

The Tigers sealed the dual sweep as Tulane fell 1-2, 0-2 on courts one and two.

Tulane took on No. 8 South Carolina in the second dual match-up of the day, looking to right the ship following a 0-5 outing against host LSU, but the Green Wave couldn’t keep up with the Gamecocks and dropped to 0-2 on the afternoon in a 1-4 loss to the CCSA opponent.

No. 5 pair of Christina McAfee and Sarah Strasner played to three sets to start Tulane off against the Gamecocks but dropped the third 15-9 to give South Carolina a 1-0 advantage.

Courts two and three went similarly in straight sets, but No. 2 duo of Kaylie McHugh and Tea Juric notched their tenth match win of the season, knocking off the Gamecocks 25-23 and 15-6 in sets two and three of the match-up.

Madeline Mertz and Lan Nguyen hung close to their opponents on court one but fell 19-21, 22-24 to South Carolina to close out the match.

The Green Wave got back into the win column in their final dual of the day, taking down North Florida on a score of 4-1 by notching victories on all but the second court. With the win, Tulane moved to 3-0 in the all-time series with the Ospreys.

Following a close opening set on court five, Anna Chin and Sarah Strasner would complete a sweep of their opponents on scores of 21-19 and 21-13, followed by similar 21-19, 21-16 scores from Tarin Mergener and Annie Shurtz on court four to give Tulane a 2-0 advantage in the dual.

The Green Wave clinched the match on their third straight sweep, this time coming from No. 3 pair of Briana Correa and Hannah Holmes on scores of 21-18 and 21-16.

Tulane closed out day one in Baton Rouge on a final match win on court one, as Madeline Mertz and Lan Nguyen defeated the Ospreys 21-11 and 24-22.

The Green Wave close out the Tiger Beach Challenge with back-to-back duals against UAB and No. 19 FIU at 9:00 a.m. and 1:00 p.m., respectively. Both matches will be played at Mango’s in Baton Rouge.

Results from Day One of the Tiger Beach Challenge