1,000 Kills Could be an Early Birthday Present for Simone Lee 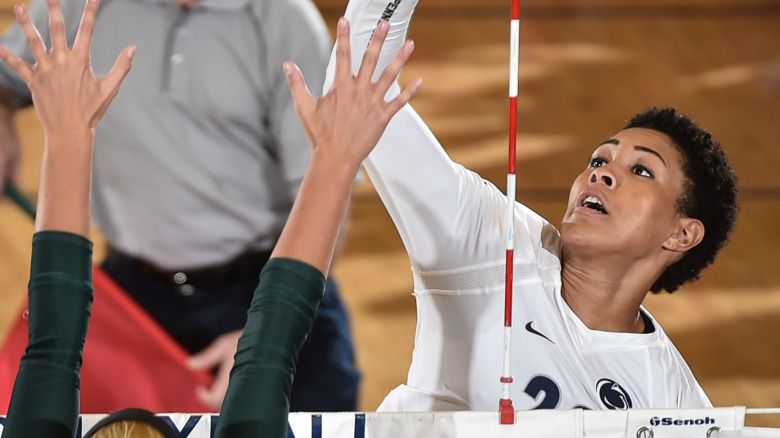 Simone Lee, one of two senior outside hitters for Penn State, is only seven kills away from eclipsing the 1,000... Current Photo via Mark Selders/Penn State Athletics

Simone Lee, one of two senior outside hitters for Penn State, is only seven kills away from eclipsing the 1,000 career kills mark, and is likely to do so during tomorrow’s match against Ohio State. Incidentally, her birthday happens to be this Saturday, meaning this career milestone could serve as an early birthday present for the Nittany Lion.

A 2016 First Team All-American, Lee broke out onto the national spotlight for the Nittany Lions after leading the team for the season with a whopping 503 kills on a .264 clip, averaging 4.16 per set. She had played in her prior two seasons, earning 2 and 18 starts respectively for her freshman and sophomore campaigns.

No. 3 Penn State currently sits at 13-1 overall on the season, their only loss coming to Nebraska, who is the lone undefeated team in the Big Ten conference. The Nitanny Lions went undefeated for the pre-conference slate, knocking off teams like Stanford twice, Colorado, and Texas A&M.

Their opponent for tomorrow’s match, the Ohio State Buckeyes, have not found as much success, currently sitting at 9-6 overall and 2-2 in conference. They have earned some notable wins over Purdue, Maryland, Dayton, and Notre Dame, but have fallen short against teams like Missouri State and BYU. However, after being on the road for three matches, the Buckeyes will return to Columbus to play in front of a loud and rowdy home crowd.

The Buckeyes have struggled against the Nitanny Lions, having have lost 47 of the 62 matchups since 1981, though they did trounce them last year in a five-set victory.

Lee currently has 197 kills on the season and is averaging 4.10 per set-she only needs seven more to reach 1,000, a feasible act in what could potentially be a long, competitive game of volleyball against Ohio State. The kills and points leader for the Nittany Lions, Lee will undoubtedly be a crucial component in tomorrow’s success against the Buckeyes.