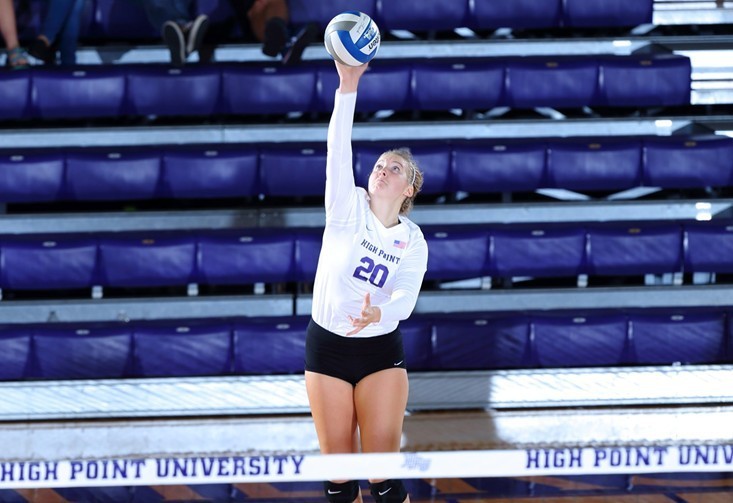 Haley Barnes, a senior outside hitter and captain of the High Point University women’s volleyball team has become one of... Current Photo via High Point Athletics

Haley Barnes, a senior outside hitter and captain of the High Point University women’s volleyball team has become one of four Panthers in the program’s division one history to tally over 1,000 career kills and digs.

Barnes found success early on in her collegiate career, earning a spot on the All-Big South Freshman team during her first season as a Panther. She secured a spot as a team captain for her sophomore campaign, starting in 30 of High Point’s 31 matches and earning All-Big South First Team honors after tallying 273 kills and 157 digs on the year.

In her junior season, Barnes became the tenth player in High Point’s division one history to eclipse the 1,000 career kills mark. She led the Panthers last season in kills per set, averaging 3.37, and posted the eighth-highest season kills total at 418.

Named to the preseason All-Big South team for the second straight season, Barnes was entering her senior campaign with high accolade, and so far has performed accordingly. One of 30 finalists for the Senior CLASS award, an annual recognition given to one senior in Division One volleyball for excellence in four areas: community, classroom, character, and competition. So far this season Barnes has 203 kills on a 3.12 per set average, and 183 digs.

The High Point Panthers are currently 11-6 and 4-0 in Big South play, with notable wins over programs like Northern Illinois and Georgia, where Barnes posted 16 and 22 kills respectively to carry her team to victory. The 2016 Big South Conference champions, the Panthers and Barnes are currently poised for a run at their second-straight conference title and NCAA tournament berth.