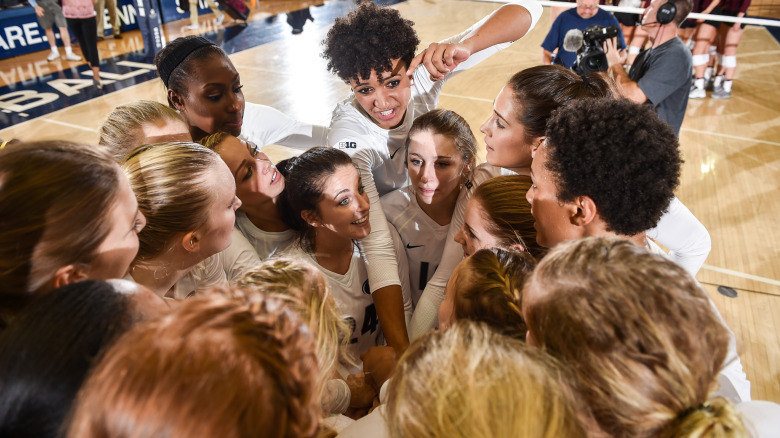 The Nittany Lions trailed only twice in the match, to snap their four match losing streak. Penn State out-blocked Iowa 14-3 and out-hit the Hawks .345-.030.

For the Hawkeyes, Lauren Brobst led with nine kills, while Reghan Coyle added seven. Annika Olsen picked up 15 digs in the loss.

The Nittany Lions trailed just twice during the match, as the team out-blocked the Hawkeyes by a staggering 11-block margin, posting 14 to Iowa’s three. The 14 blocks were the second most by the team this season, and the most in a three-set match during the 2016 campaign.

On the offensive end, junior outside hitters Simone Lee and Ali Frantti along with Washington each scored a team-best nine kills. Washington was the most efficient attacker on the team during the sweep, finishing at an even .500 on the night, erring only once in 16 attempts.

The trio of Weiskircher, Lee and freshman libero Kendall White accounted for 30 of Penn State’s 41 digs. White led the team with 13, while Weiskircher and Lee added nine and eight, respectively.

PSU led set one wire-to-wire, with the team registering seven total blocks over the set for a 25-11 blowout. Iowa was limited to -.212 hitting, as Washington and Weiskircher combined for nine block assists in the set. The frame opened with a 5-0 run for the Nittany Lions, with four blocks scoring before Iowa put up points of its own. Penn State jumped to a 13-7 lead before Iowa’s first timeout. White had a service error before a 6-0 spurt from Penn State grew the lead to 19-8. Kills from Lee and Washington set up set point, before Gorrell and Weiskircher made the set-winning rejection.

The second set was tied early before tough serving from Lee and a giant swing from junior opposite Heidi Thelen gave PSU a 9-4 advantage. The two sides swapped points before back-to-back kills from Weiskircher and Lee led Penn State to a 15-8 edge, forcing Iowa’s first timeout. At 17-11, Penn State pushed ahead for a 3-0 run, with a block by Washington and Frantti forcing Iowa’s second timeout at 20-11. Sophomore defensive specialist Keeton Holcomb was aced at the end of a 4-1 Iowa run to force PSU to take its first timeout at 21-15. The break worked, as Penn State let up only one more point, en route to a 25-16 set two win.

Set three stayed the most tightly contested, as both sides tussled back and forth to a 12-10 score. From there, a kill and a block from Washington guided PSU on a 4-1 run. A pair of kills from Lee and one from Frantti widened the gap to five, as Iowa took time, down 18-13. Thelen and Frantti pounded kills to force a timeout at 24-17, but it proved futile as Washington slammed down the kill next play to seal the match, 25-17.

Series
-Penn State moves to a 50-0 advantage in the all-time series against Iowa and leads 25-0 in matches played at home in Rec Hall.

“Penn State is a national championship team and they played like it today,” said head coach Bond Shymansky. “They were hungry to get off their four-match losing slide here in the Big Ten, so we caught that buzzsaw. It took us a while to get it going, but the positive note is we climbed as the match went on. Our hitting percentage got better and better. In the third set, we were pressing and made it more competitive to give ourselves more opportunities.”

Penn State took a 9-3 lead before the Hawkeyes used a 4-1 run to cut the home team’s advantage to 10-7. Reghan Coyle, Meghan Buzzerio and Ashley Mariani each racked up a kill during this stretch before the Nittany Lions secured a 25-11 set one victory. Coyle led the Hawkeyes with three kills, while Mariani and Buzzerio each chipped in two.

Buzzerio began set two with a monster kill before the home team scored back-to-back points to take the lead. Coyle then amassed the next two kills for Iowa to leave the home team with a 4-3 advantage. Penn State went on a run to extend its lead before the Hawkeyes used a 6-2 run to stop the Nittany Lions. Penn State clinched the second set with a 25-16 win. Brobst racked up four kills for the Hawkeyes during set two.

Iowa began set three with a 6-3 lead bolstered by one kill each from Buzzerio, Brobst and Janota as well as blocks from Mariani and Coyle. Penn State used a 5-1 run to take an 8-7. The two teams then scored back-and-forth points before the 11th-ranked Nittany Lions captured a 25-17 victory in set three.

Iowa takes the court again on Wednesday as they travel to No. 1 Nebraska to take on the Cornhuskers. First serve is slated for 7 p.m. (CT).