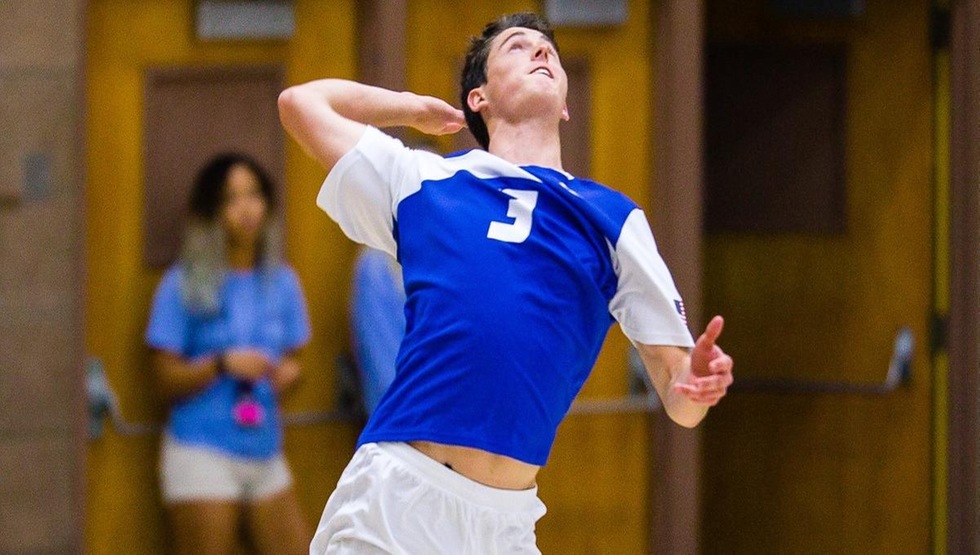 Roy McFarland had a career-high in kills as #12 UCSB downed #4 UC Irvine on senior night to put a wrench in their at-large hopes. Archive Photo via Eric Isaacs/UCSB Volleyball

Santa Barbara, California – Normally #4 losing at #12 in a close five-setter wouldn’t have gigantic implications, but with just one week left in the regular season for the Big West and UC Irvine slightly holding onto the second at-large in the latest VolleyMob Bracketology, a loss for the Anteaters was just that. It was huge. It’s not quite crippling, as they can get revenge over UCSB and do some work in the Big West postseason, but it doesn’t help.

Meanwhile for UC Santa Barbara, they probably don’t have a chance at an at-large bid, but this gets them another solid victory as they’ve shown the ability to beat some of the best in taking down schools like BYU, Pepperdine, CSUN and Ball State earlier. UC Irvine now adds to that listing as the Gauchos will be a dangerous team to meet in the Big West Tournament.

As far as the match action goes, things could have swung to either side on multiple occasions, with UCSB’s two-point separation in the fifth representing the difference in total points between the two. The stat sheet reflected the balance with tight marks in hitting percentage (.303 to .280, UCI), digs (48-41, UCI) and blocks (10-9, UCI). Where the Anteaters posted an advantage in aces (8-2), they also lost in serve errors with eight more (27-19). Additionally, some of these were a bit lopsided from UC Irvine hitting .500 to UCSB’s .259 in the first set.

Individually for UCSB, star Keenan Sanders (10 kills, .318, seven digs, two blocks) was strong, but his key running mate, Corey Chavers, was limited to just four kills (.250). That meant someone needed to step up, which is exactly what happened with Roy McFarland (16 kills, .250, four digs, two blocks) – who came into the match under two kills per set while hitting under .140 and posted his career-high for kills. It didn’t hurt that other stepped up too, as Brandon Hopper (nine kills, .615, two blocks) and company contributed heavily as well.

Next up, these two teams now get ready for a second meeting as they head to Irvine for the rematch with UCSB looking for the sweep and UC Irvine looking for vengeance.

It was sweet redemption for the Gauchos (11-11, 4-5 Big West), who lost both matches last season to the Anteaters (19-8, 5-4 Big West) in five sets. In fact, five of the last nine meetings between these two teams have gone the distance while Thursday’s win was just the second for UCSB over UCI during that nine-game stretch.

UC Irvine came out of the gates hot in the first set, tallying a .500 hitting percentage with 13 kills on 22 attempts and just two errors. The Gauchos were hanging around early until, with UCI leading 18-16, the Anteaters scored four straight points to go ahead 22-16. The six-point lead was the largest for either team all night in a closely contested battle and it did not last long.

Kills from Connor Drake and Corey Chavers kept the Gauchos close and gave UCSB momentum despite trailing 24-19. After a service error gave the serve back to UCSB, the Gauchos rattled off four straight points of their own, highlighted by back-to-back kills from Brandon Hopper to make it 24-23. A UCSB service error, however, gave the opening set to UCI.

The two teams battled back and forth in the second set until, with UCI leading 8-7, the Gauchos went on a four-point run behind a pair of UCI attacking errors and a pair of kills from Chavers to put UCSB ahead 11-8. A 6-3 spurt for UCI tied the game at 14-14 before the Gauchos went on a 5-3 run behind kills from Hopper and Casey McGarry. UCI battled back to tie the score at 21-21, but the Gauchos got two clutch kills from Roy McFarland on assists from McGarry to take a crucial two-point lead down the stretch, 23-21. UCI bounced back once more with two straight points, but UCSB turned to Drake for a big kill followed by a UCI attacking error to even the game at 1-1.

The Gauchos outhit the Anteaters .321 to .296 in the second but the third set would see both teams hitting percentages drop significantly.

As the back-and-forth action continued, UCSB pulled ahead 13-10 in the pivotal third set before UCI went on an 8-1 run to take a 19-15 lead. The Gauchos rallied all the way back to tie the score at 22-22 after strong plays from Keenan Sanders, but UCI snagged three of the last four points behind a pair of kills from Aaron Koubi to take a 2-1 lead. UCI hit their lowest percentage of the night in the set, .205, but had their highest kill total of 18 while the Gauchos managed just seven kills in the set on a .133 hitting percentage.

In the fourth, however, the Gauchos would significantly tighten up their accuracy and hit .343 with 16 kills, pulling out another close set 25-23 to force a decisive fifth set. UCSB found itself trailing 21-19 before rattling off four straight points behind two UCI errors and kills from McFarland and Hopper. After a UCI ace tied the set at 23-23, McFarland slammed home a kill for game point and a bad set from the Anteaters sent the game to the fifth.

In the fifth, UC Irvine raced out to a 7-4 lead, but the Gauchos looked to flip the script from the previous season and scored three of the next four points, highlighted by a Drake kill, to get within one point, 8-7, as the teams switched sides. McFarland came through late in the set with a kill to tie the score at 10-10 and moments later giving the Gauchos a 12-10 lead. The two teams traded points until a service error from the Anteaters gave UCSB the 15-13 set and match victory.

McFarland finished with 16 kills on 40 attempts to lead the Gauchos while Sanders also reached double figures with 10 kills. Hopper was close behind with nine while Drake and Spencer Fredrick tallied seven apiece in a well-rounded offensive game for UCSB. McGarry handled most of the setting duties on the night with 34 assists while Randy DeWeesepitched in 10. McGarry also notched 12 digs for the double-double. Fredrick finished with five total blocks at the net while Drake finished with four.

UCSB rounds out the regular season with another match against UC Irvine on the road this Saturday, Apr. 14 at 7:00 p.m. at the Bren Events Center.

Stadick recorded seven total blocks, including three solos to give him 26 on the year. He topped his old school mark of 25 set in 2017. He also added 10 kills.

UCI opposite Karl Apfelbach had a team-high 17 kills and three aces followed by Aaron Koubi with 16 kills. Outside hitter JB Kamcame off the bench to tie his career-high with eight kills and five digs in three sets. Libero David Parker had a match-high 13 digs, while setter Dante Chakravorti posted 57 set assists.

UCSB scored four unanswered in the second set to lead 11-8. UCI clawed their way back in and a Gaucho ball-handling error tied the set at 14 all. The Gauchos would score the next two, 16-14 and continue to lead 21-19. Kills by Stadick and Schneidmiller knotted the score at 21-21 and the teams would each score to make it 23-23. UCSB would use a kill and an Anteater attack error to win the set 25-23.

UCSB would hold a 13-10 lead before UCI had kills by Apfelbach and Koubi and a solo block by Stadick to even the third set at 13-13. After a kill by UCSB, UCI would use a kill by Stadick, two UCSB setting errors and an ace by Apfelbach to take a 16-14 lead. After a Gaucho timeout, Koubi had a pair of kills to extend the lead to 18-14. The Anteaters would lead 19-15 only to watch UCSB score three straight to close to 19-18. UCSB would catch the Anteaters at 21-21 then at 22-22, Koubi would put away two kills to give UCI the 24-22 advantage. Following a UCSB kill, Koubi would hammer down the set winner 25-23.

A 3-0 run which included two kills by JB Kam moved UCI in front 8-4. A block by Stadick and Koubi gave UCI the 12-8 advantage. UCI would continue to lead until UCSB would recorded back to back kills to take the 19-18 advantage. Two UCSB attack errors and a kill by Koubi forced a timeout as the Anteater went to 21-19. The lead was short lived as the Gauchos would score the next four points, 23-21. UCI rallied with the next two, only to watch UCSB score the final two, 25-23 and force a fifth set.

UCI used a 4-1 run which included two kills by Stadick and an ace by Koubi, 6-3. UCSB would tie the set at 8-8 then score three in a row to take a 12-10 lead. A UCI service error put UCSB at set point then after a kill by JB Kam another service error gave the Gauchos a 15-13 win and the match.

The teams will play again Saturday (Apr. 16) at 7:00 p.m.at the Bren Events Center in the regular season finale.