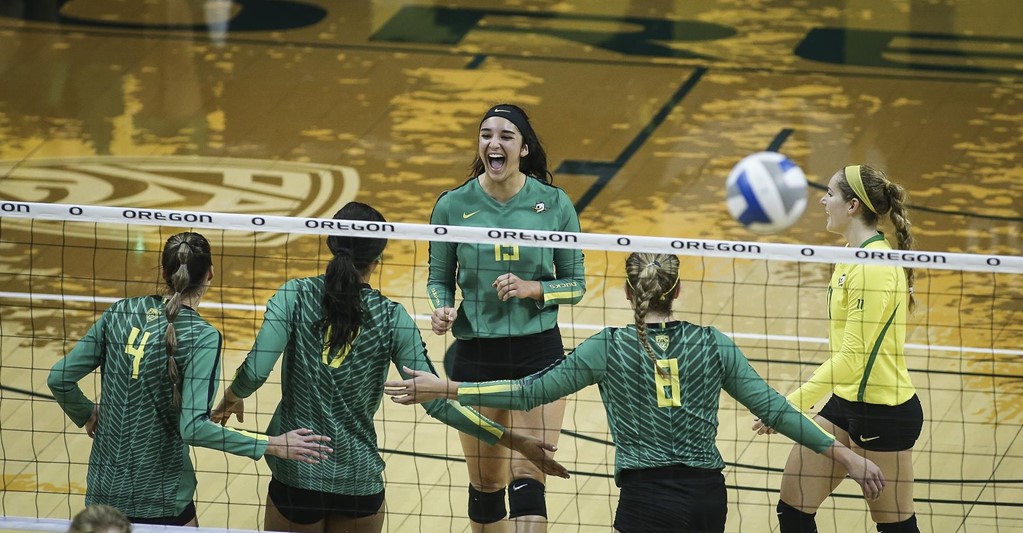 #15 Oregon swept Cal with plenty of contributions throughout the roster both on offense and in blocking. Archive Photo via Oregon Athletics

Berkeley, California – #15 Oregon took care of business with Cal on the road with the combination of a balanced attack and a strong front-row defense. The win is big for a Ducks team in good position for hosting two NCAA Tournament rounds, while Cal continues to stay on the wrong side of the bubble.

One of the Ducks strongest assets is their balance and depth throughout the roster, which was on full display. That can be a great thing, as they have so many go-to options, which was shown with just one player notching double-digit kills (and barely hitting that mark) even though they hit .367 as a team. In total, seven players had four or more kills with Ronika Stone (10 kills, .667, five blocks) and Jolie Rasmussen (eight kills, .389, eight digs) leading the way.

It wasn’t just about having multiple options on offense, but the Ducks showed that depth and balance goes both ways as they out-blocked Cal 9-3 with six players recording at least one block for Oregon. That defense was key in holding Cal to a .154 mark despite the strong efforts from Antzela Dempi (10 kills, .318).

Besides that, they also had more aces (5-3) while Cal logged more digs (40-35). Overall, the sum was that there were only three ties and just one lead change for the entirety of the match, as Oregon was in control throughout. Anytime you side out your opponent at a 70% rate, its a good indication of your strong play.

Oregon is sitting pretty right now after earlier this week the committee listed them in the top 10 behind their strong RPI. That will be further tested on Sunday as they clash with #2 Stanford. For Cal, they will wrap up their week with Oregon State in town on Sunday, as following that five of their next six opponents are currently ranked.

With a big match with No. 2 Stanford looming on Sunday and a top 10 RPI ranking entering the weekend, the Ducks (15-6, 8-5 Pac-12) took control of the match from the opening serve and made sure the final month of the regular season would not begin with an upset at the hands of the Golden Bears (13-11, 4-9 Pac-12).

How it Happened: The Ducks scored the first three points of the match and never looked back, leading the entire first set and hitting .448 with just one error to win, 25-18. Oregon used four scoring runs of at least three straight points, and six Ducks put down kills, led by four each from Lindsey Vander Weide and Jolie Rasmussen.

Oregon led from start to finish again in the second, jumping out to a 7-2 lead before pulling away to take a 2-0 lead into intermission. The Ducks used a 10-3 run in the middle of the set to take command, 21-12, before finishing off the set, 25-16. Oregon had just four attack errors on 58 swings to hit .414 through two sets while holding Cal to an .083 clip.

The Golden Bears took a 4-2 lead to start the third, but the Ducks quickly took back control with scoring runs of 4-0 and 5-0. Oregon led by six, 21-15, when California scored four of five to get within three, 22-19, but kills by Rasmussen and Sumeet Gill and a Cal error secured Oregon’s eighth straight win and fifth straight sweep over the Golden Bears.

Who Stood Out: Seven Ducks finished with four kills or more as UO outhit Cal, .367 to .154. Ronika Stone led the way with 10 kills on .667 hitting, and Rasmussen put down eight. Vander Weide had six kills, Taylor Agost finished with five and Lauren Page, Willow Johnson and Gill each had four. Stone factored in on five of Oregon’s nine blocks, August Raskieand Maggie Scott combined for 37 assists and Alex Hojar led UO with 11 digs.

What it Means: The Ducks entered the weekend and final month before the postseason in prime position to host the early rounds of the NCAA Tournament, but still looking for a consistently dominant level of play following last week’s home loss to Colorado. Oregon showed the potential to sustain that level of play throughout a match against the Bears, and will look to carry that over to Sunday’s match against the first-place Cardinal, who have yet to lose in Pac-12 play and are riding a 15-match winning streak.

Quotable: Matt Ulmer, Head Coach
On what he’s looking for in the home stretch of Pac-12 play…
“What I’ve been telling them is, ‘If you want to do what you want to do in the tournament, then you have to have six great matches in a row.” And I asked them when we’ve had six great matches in a row this year, and their answer to me was, ‘Never.’ So we’re fortunate right now that we still have that many matches to play, and we need to do that, and I don’t care who we’re playing, Cal or Stanford or whoever. It’s about us, and if we give our best effort, I like our shot, so we need to start putting great matches together. I thought tonight we played a nice match and thought we were pretty solid. I hate the letdown in the third, and that’s something we have to get better at.”

Notable: Johnson had just nine swings, as Ulmer said the Ducks are trying to give the sophomore’s left arm a bit of a rest with the postseason looming … Gill played only the third set and had four kills on four swings … Oregon earned its ninth sweep of the season, and second this year against Cal … The Ducks are now 15-2 when leading in attack percentage, 13-0 when holding their opponent under .200 hitting, 12-3 when leading in blocks and 11-0 when winning the first two sets … UO improves to 3-2 on the road this season.

The Bears will be back in action Sunday against Oregon State at Haas Pavilion. First serve is set for 1 p.m.