#18 Tulane Splits with Mercer, CofC on Day 1 of Charleston Classic 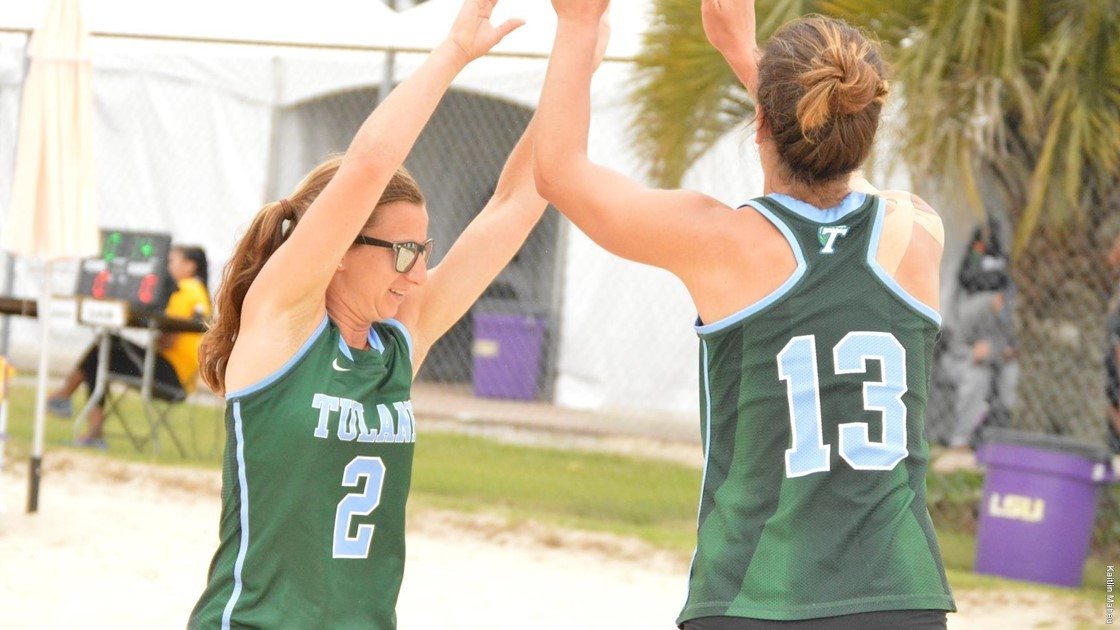 Courtesy Tu PLEASANT, S.C. – Tulane opened up day one of the College of Charleston Beach Classics with a split... Archive Photo via Tulane Athletics

PLEASANT, S.C. – Tulane opened up day one of the College of Charleston Beach Classics with a split decision in Mt. Pleasant, South Carolina, defeating Mercer 4-1 but falling to the hosting Cougars 2-3 in the afternoon. Following Friday’sduals, the Green Wave move to 11-5 on the season and 2-5 against Coastal Collegiate Sports Association opponents.

Tulane opened up the weekend with a 4-1 victory over Mercer, as the Green Wave sealed match sweeps on three courts and wins on four.

Annie Shurtz and Anna Chin started things off on court five, taking the first set 21-18 but falling 17-21 in the second. Even at one set apiece, the No. 5 pair gave Tulane the 1-0 lead on a 15-8 decision in the third set. Tulane’s second win of the dual would come on court four, with Sarah Strasner and Hannah Holmes defeating Mercer’s Grejta Otten and Jessica Johnson in set one on a score of 21-19 before fighting to a 2-0 finish with a 24-22 final in set two.

Briana Correa and Tarin Mergener improved to 9-2 on the year to seal the Green Wave victory on court three, pulling off a close 24-22 win in set one and sealing the deal in a 21-17 decision in the second set. No. 2 pair Tea Juric and Kaylie McHugh then earned their thirteenth win of the season as the senior-freshman duo also took down Mercer in straight sets on scores of 21-18 and 21-15.

In the final match of the morning, juniors Madeline Mertz and Lan Nguyen took the first set 21-13 but by the same score in the second to even the dual at one set apiece. Looking to seal Tulane’s eighth dual sweep of the year, Mertz and Nguyen played close to Mercer’s No. 1 pair of Tori Penrod and Emily Krogman but fell 10-15 in set three.

The Green Wave played their first of two CCSA match-ups of the weekend on Friday afternoon, falling to host College of Charleston, 2-3, to wrap up day one in South Carolina.

Unable to keep momentum rolling from their earlier win over Mercer, the Green Wave started out slow on courts four and five, with No. 5 pair of Shurtz and Chin falling in straight sets. Tulane’s fourth flight of Strasner and Holmes then battled in attempt to even the dual at one match apiece, taking the first set 22-20, but fell 13-21 and 15-17 in the next two as the College of Charleston took a 2-0 lead.

Correa and Mergener suffered just their third loss of the season as a pair on court three, first falling to the Cougars 18-21 but bouncing back for a set-two victory on a score of 21-17. The duo would fall in set three, 12-15, as the Green Wave suffered their first dual loss of the weekend.

Despite losses on the first three courts, Juric and McHugh posted their second win of the day to move to 14-2 on the season, downing the Cougars in straight sets on scores of 21-18 and 21-15. Tulane also pulled off a win on court one, with Mertz and Nguyen defeating the Cougars’ No. 1 pair in three sets.

Tulane closes out the College of Charleston Beach Classic on Sunday with two early morning contests against Lincoln Memorial and conference foe UNC-Wilmington.

Results from Day One of the College of Charleston Beach Classic