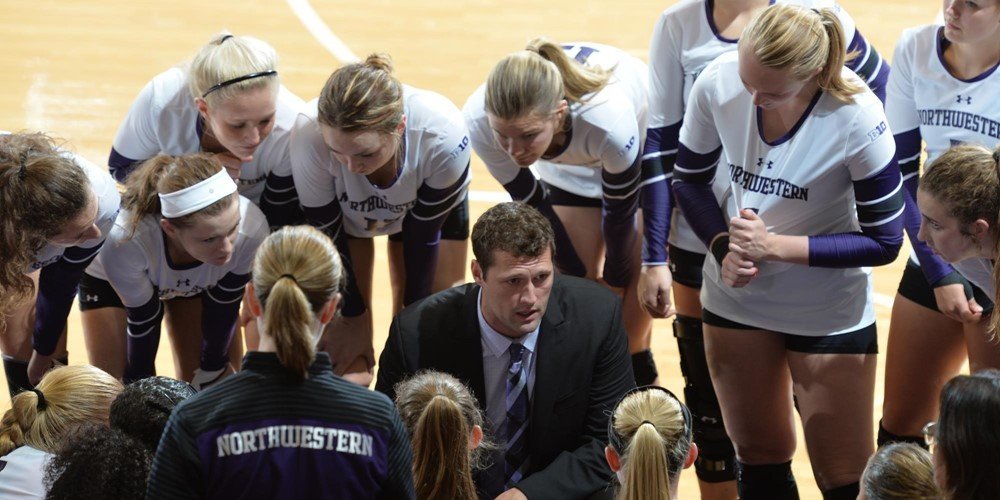 The 19th-ranked Ohio State Buckeyes shook off their slow start to Big Ten play and grabbed their first victory, a 3-0 sweep, on Wednesday at home over the Northwestern Wildcats.

The Buckeyes’ defense, with a whopping 60 digs and 7.5 team blocks, controlled the match, led by a pair of 13-kill statlines from Luisa Schirmer (hitting .184) and Taylor Sandbothe (hitting .308).

Despite the loss, Northwestern had a few statistical reasons to celebrate. Junior Taylor Tashima had 25 assists, which put her over 2,500 on her career. She ranks 7th on Northwestern’s all-time rankings in that category and is only 26 short of 6th place.

Symone Abbott chipped in 10 kills for the Wildcats, which she’s now done in 25 consecutive matches back to October 30th of the 2015 season.

“Symone is working really hard to be able to put up those numbers with a lot of people scheming against her,” head coach Shane Davis said. “The fact that she is able to put up double-digit kills that many matches in a row is pretty impressive.”

Aside from their defense, Ohio State controlled the match by staying away from Northwestern libero Katie Kniep, who only had 3 digs on the day.

A formidable blocking unit produced a half dozen stuffs by intermission and helped to limit Northwestern at a .085 attack percentage. The Buckeyes, meanwhile, hit .257 with a 14-kill advantage (44 to 30). Luisa Schirmer and Taylor Sandbothe each terminated 13 kills and while Schirmer notched her third double-double of the year with 10 digs, Sandbothe was responsible for 4.5 more points via five block assists and a pair of service aces.

Ohio State now owns a 53-20 advantage in the all-time series with Northwestern, including a 28-6 mark inside St. John Arena. The Buckeyes have won four in a row vs. NU and 13 of 15 overall under head coach Geoff Carlston.

SET 1: Runs were aplenty in the opening period, starting with a 5-1 surge out of the gates for Ohio State to force a Wildcat timeout. After Northwestern battled back to go ahead 9-8, the Buckeyes got hot again with four tallies in a row. By set’s end, Ohio State rattled off streaks of three consecutive points or more five different times; the last of which broke up an 18-18 stalemate and stretched four points in length to lift OSU on top for good at 22-18. The four-point margin would remain steady in a 25-21 Buckeye winner.

SET 2: Things got out of hand midway through the second set when the Buckeyes secured 16 of the final 22 rallies en route to a 25-12 whitewashing. Ohio State stuffed the Wildcats five times and dug 22 balls, burying Northwestern into the negatives for hitting efficiency at minues-.077. A six-point stint for freshman Camry Halm at the service stripe virtually sealed the deal late in the set.

SET 3: Northwestern flipped the script coming out of intermission. The Wildcats built an edge as large as a half dozen at 11-5 before Ohio State burned a timeout to regroup. And regroup they did, crawling back to even at 22-22 and ultimately clinching the only set-point opportunities of the night. Ohio State finally capitalized on the fourth set-point and closed the door at 28-26 when Northwestern’s errant attack ended the match.

It’s back to life on the road for Ohio State, traveling to Lincoln, Nebraska, to take on the top-ranked Huskers Saturday at 8:30 p.m. ET.

COLUMBUS, Ohio – Taylor Tashima and Symone Abbott recorded career milestones on Wednesday night at St. John Arena against No. 19 Ohio State, but the Buckeyes won in a 3-0 sweep.

Taylor Tashima had 25 assists on the night and reached 2,500 for her career early in the 3rd set. She is 26 away from passing Madelyn Shalter for sixth-place on the Northwestern all-time list.

“The hitters on our team deserve all the credit,” Tashima said. “To be able to get an assist, we have to have hitters who can put away the ball.”

Abbott recorded double-digit kills (14 on Wednesday) for the 25th straight match, dating back to Oct. 30 of last season. She has recorded 14 or more 17 times in that stretch.

“Symone is working really hard to be able to put up those numbers with a lot of people scheming against her,” head coach Shane Davis said. “The fact that she is able to put up double-digit kills that many matches in a row is pretty impressive.”

Ohio State was effective in hitting the ball away from libero Katie Kniep, meaning other Wildcats had to step up on the defensive end. Kaitlin Tavarez had a team-high 10 digs, followed by Rafae Strobos with nine and Tashima with eight. The Buckeyes were limited to .257 hitting on the night.

The Wildcats used a big 8-2 run early in the 1st set to grab a 9-8 lead, and after Ohio State retook the lead, scored five straight to notch things back up at 18. The Buckeyes prevailed in the opening frame, though, 25-21.

Ohio State used an 8-1 run late in the second set to pull away for a 2-0 lead and held off a strong Northwestern attack in the final frame to come away with a 28-26 third set win and the sweep.